J Class Association Approve Lines Plans for Svea - one of the longest yacht construction projects - 74 years from design in 1937 to expected completion in 2011. 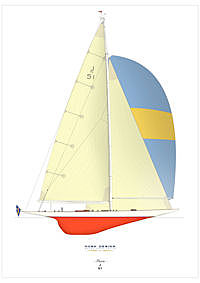 During 1999, whilst researching International 8 Metre plans by designer Tore Holm, John Lammerts van Bueren discovered plans for a Swedish J Class yacht dating from 1937. The fragile paper plans were close to disintegration but were thankfully saved and carefully copied.

Since the set up of the J Class Association (JCA) back in 2000 there have been several possible projects for the build of this outstanding design, but recently copyright of the original plans came into new ownership.

New lines plans for the original design of the hull have now been completed by Hoek Design and following a meeting on 17th February 2009, were fully approved by the JCA.

Svea was designed to be the longest of all the Js - a racing Super J. Detailed research by the Hoek design office and other experts in the field, suggests that this will be one of the fastest of all the J Class designs. She will certainly be one of the longest at 41.50 metres overall. Current plans are to build the yacht with a flush deck as per the original design.

Building of the aluminium hull is planned to start in May 2009 at the Bloemsma Shipyard, Holland. From there it will be barged to the Claasen Jachtbouw for finishing. Completion is due for 2011, making this one of the longest yacht construction projects - 74 years from Tore Holm’s drawing board to expected comissioning in 2011.