Holland Jachtbouw is close to completing the spectacular 40-metre J-class Rainbow, which is due to hit the water in February. This fabulous looking superyacht offers the ultimate blend of high-tech innovations in the engine room with a luxurious mahogany interior and all the hallmarks of grand prix racing on her deck. Rainbow will feature prominently at the keenly awaited J-class races in England during this summer’s Olympic Games. 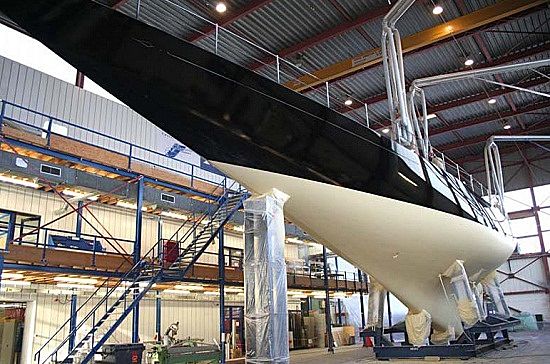 Uniquely for a J-class yacht, Rainbow is equipped with a complete hybrid propulsion and power system. This means she can be operated entirely on the Hy-Store Li-ion batteries, including sailing, navigation and hotel load. A lightweight 50 kW WhisperPower Hy- Gen variable speed generator combined with the 50 kW main engine integrated fly wheel generator provide the power. The system has already passed an intensive testing programme and will be fully Lloyd’s Register classified.

Dykstra & Partners took the eponymous America’s Cup winning boat from 1934 as their design template. The wonderful lines of William Starling Burgess on the original Rainbow (scrapped for her metal in 1940) have now been incorporated in a yacht that meets the Jclass Association maximum performance rules. All modern functional requirements have been integrated with full respect for Rainbow’s heritage, while the decks have been kept as clean and flush as possible featuring only a mahogany doghouse and skylight.

The interior has a 1930s styling, offering superior comfort to six guests and seven crew members. Classic art-deco details abound in a mahogany interior that will give space to seven crew and six guests for cruising. When it comes to racing, a much larger crew will be required. After Rainbow has completed an intensive period of rigging and sea trials, the international permanent crew will embark on dedicated training sessions as they forge close ties with the all-Dutch race crew (which will include Holland Jachtbouw commercial director Tako van Ineveld and operations director Roeland Franssens). Expectations are high that - as the epitome of a classic performance yacht - Rainbow will compete against the other J’s with great distinction.