David Pitman, Secretary of the J Class Association announced that the first event in the J Class Global Calendar of events will be staged in Newport, RI. Racing in the famous waters of the America’s Cup, the J Class will use this regatta to kick off a four regatta programme culminating in a race around the Isle of Wight in July of 2012 on the original 1851 America’s Cup course, for the Hunderd Guinea Cup. 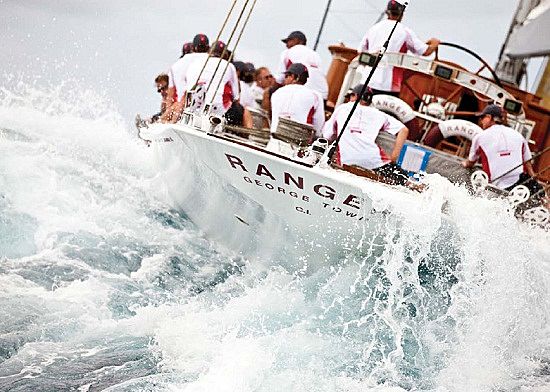 In 1930, Newport was the venue for the start of the remarkable J Class era. Between 1930 and 1937 there were just 10 of these stunning yachts constructed for the purpose of winning the America’s Cup. Two of the originals (Shamrock V and Velsheda) will participate in Newport, together with Ranger, a true replica of the original. Negotiations continue with other new J yachts for them join the regatta.

Lars Loftus, Captain of Velsheda, said, “Our team looks forward to racing in Newport, Brad Read of Sail Newport has given us an exciting course inside the bay which will be very testing for our thirty race crew.”

In response, Dan Jackson, Captain of Ranger, said, “We look forward to competing against Velsheda on Ranger’s historic home waters.”

Sail Newport and the J Class Association are responsible for the on water race management of the regatta. The yachts and their teams will be based at the Newport Shipyard with crews staying at the Newport Harbor Hotel & Marina.

The regatta series of 5 races will be run from June 15th to 19th, 2011 with starts and finishes off of Fort Adams. Viewing stands will be set up on the Northwestern corner of Fort Adams and other excellent viewing options will be at Castle Hill Inn and various spots in Jamestown.

Working with the US Coast Guard, Sail Newport will establish safe water viewing areas along the entire course.

Mr. Pitman closed the announcement by saying, “This will be the first competitive J Class regatta in the USA since the America’s Cup event of 1937 between the Defender Ranger, and the Challenger Endeavour II.”

“We hope to provide five days of spectacular racing and with the continued support of the State and the city of Newport we look forward to planning arrangements for a major regatta in Newport during 2014, featuring up to 10 yachts.”