If there is such a thing as a typical superyacht designer, Jarkko Jämsén isn’t it. A wooden boat-builder by background, Jämsén grew up walking the forests of Finland “in a really small village”, only learning to speak English when he was 20 and remaining at a blissful remove from the influences of international media. His grandfather had a small cabin in the Finnish islands, where Jämsén learnt everything about fixing boats, and built his first wooden boat when he was 17 (“it had electric propulsion and freestanding masts. I thought it was quite innovative”). 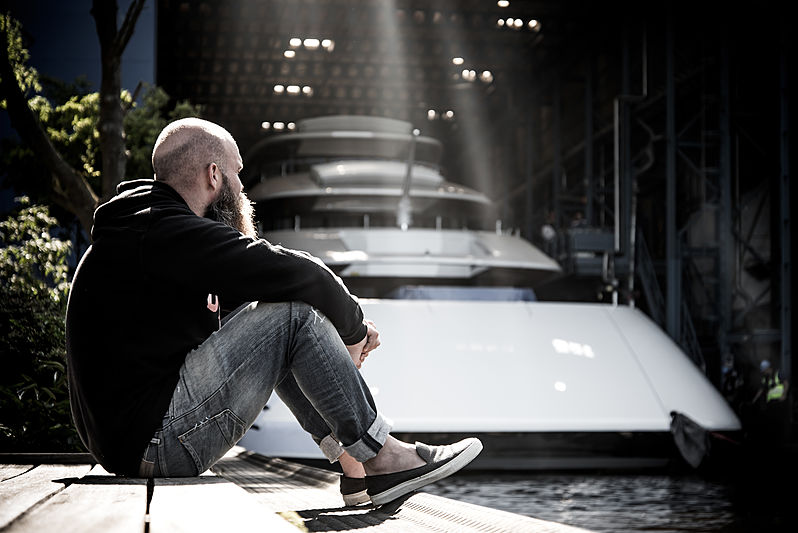 Photo: Tom van OossanenFirst earning his stripes as a naval architect, and giving credit to the excellent free education system enjoyed throughout Scandinavia, Jämsén was able to attend one of the best design schools in Finland. After this, his design career took off, starting with the small project of designing the Finnish presidential yacht. Proving once again that you should never listen to your school careers advisors, Jämsén spent a decade not training in design due to the fact that he is quite badly colour blind (“it took some 10 years or more to make the loop and decide that the guy wasn’t right”), only to now be heading up three studios based out of Helsinki and Monaco. Between them, the studios have created about 50 different models, and there are around 1,000-1,500 boats being built per year that have been designed by Jämsén’s multi-disciplinary team. 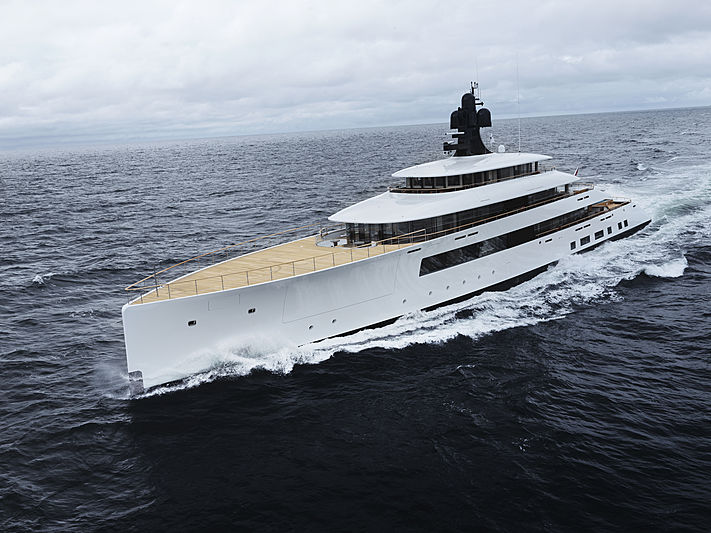 Photo: Tuukka KoskiThere are three main strings to Jämsén’s bow: the Helsinki-based Aivan (a product design and branding studio), Navia Design (the marine and boating subsidiary of Aivan which focuses on smaller, semi-custom production and volume production designs for motor, sailing and electric boats), and finally, the most recent development, Jamsen, his Monaco-based superyacht design studio. This brings us to the reason for the Finnish designer’s allusions in yachting media over the last year: the 77.25-metre Feadship Pi (previously named Syzygy 818) for which Jämsén was personally selected by the owner via his friend, the owner’s representative, to create the concept, interior layout and exterior design. “I didn’t have any kind of portfolio or drawings to show, the owner gave me a chance to make the design, I have no idea why”, the designer explains frankly. “I promised that I would do my best to make it as perfect as possible. It all goes back to the communication with the owner: we were really close from the start and he was heavily involved throughout. He wanted to understand all of the details and all of the ‘whys’ behind the design." 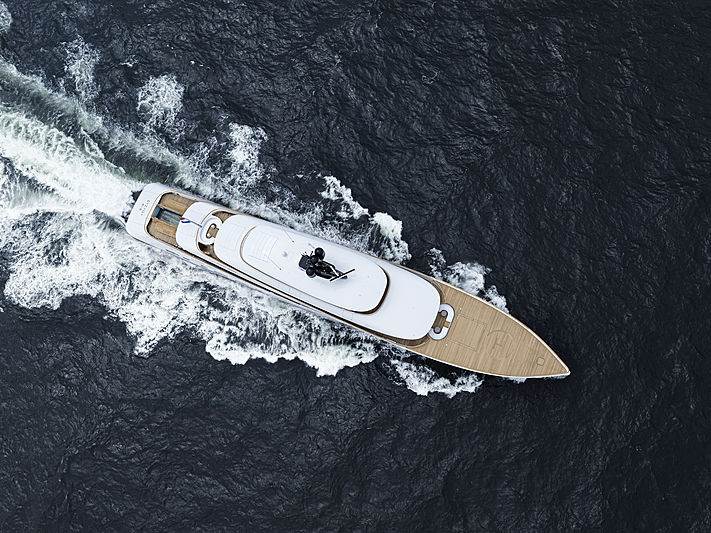 Photo: Tuukka KoskiHaving an owner client who is “heavily into design” might be daunting for any new superyacht designer, but not so for Jämsén, who took the opportunity to create a unique vessel from scratch which would be custom-made down to every detail. “We created the concept and the layout together, the owner’s representative, the owner and myself. It was challenging for me as a designer because he was so good that you have to do a bit better than you thought you could in order to meet his standards.” This also helped to ensure that when Dutch studio Sinot Yacht Design entered the scene to head up the interior design (1.5 years into the five-year build time) the relationship between the teams was also harmonious. “It was such an easy overlap with Sinot. I can’t say anything but positive things. Because the owner had such a specific feeling about what he wanted to create, this made it easy for all of us because we were working with the same principles and we trusted one another to make the best possible boat we could.”

Once the concept had been developed, it was time to bring in the next part of the puzzle: the shipyard. “Feadship is one of the best shipyards in the world. You might have to pay a premium for it, but we knew that we were going to make a relatively difficult product with a lot of small details, so we needed a shipyard that could deliver what we wanted.” As well as the concept, interior layout and exterior design of the vessel, Jämsén was also involved in some of the engineering and modelling of the hull lines. His strong desire to put wooden boat building principles, such as the use of control points, was put into practice on the superyacht, working alongside Feadship’s De Voogt Naval Architects until they “found a common understanding.” 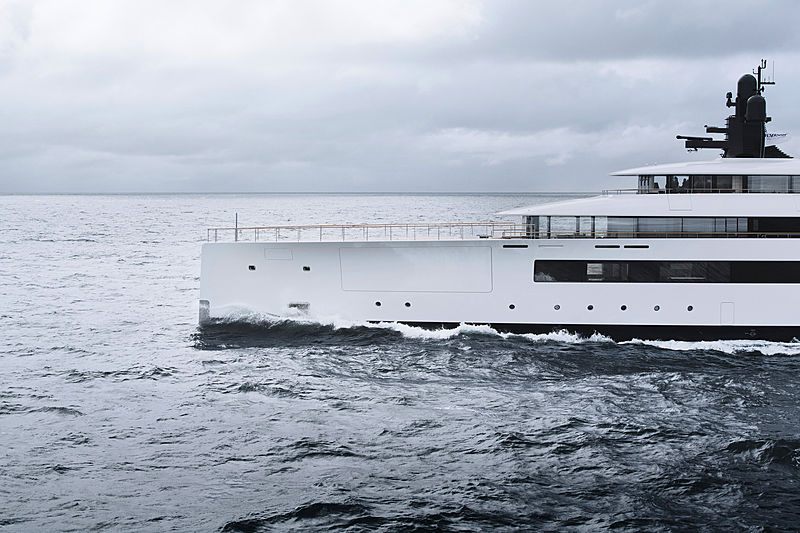 Thanks to his hands-on boat-building background, Jämsén was heavily involved with the build process itself - with the build being overseen by KK Superyachts - frequently visiting Feadship’s Royal Van Lent Kaag facility in the Netherlands as a result of wanting to understand and overcome any sticking points in the process for the carpenters and metalworkers. Through these visits, Jämsén tried to find solutions which were “doable, not easy, but doable”. This grounded practice came to fruition and was displayed to the world for the first time at the 2019 Monaco Yacht Show, after having been delivered to her owner shortly before.

Although much could be written about all the features of Syzygy 818 which made her the talk of the Monaco Yacht Show (with the long queue for visits on board every day a testament to this), it is the feeling you experience when walking around the vessel which makes her remarkable. Typically direct and understated in the way he describes his design, Jämsén puts it best: “Harmony. That is it. In the superyacht industry, people say, “look, here are 23 different kinds of leather in this corner”. But it’s not my cup of tea. I’m not saying it’s good or bad, I just don’t believe in that kind of showcasing, it has to be balanced, with everything at the same level.” 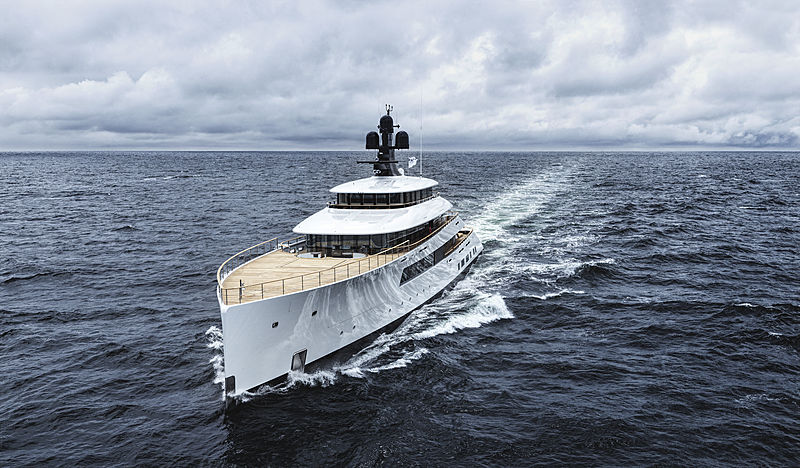 Photo: Tuukka KoskiThis sense of uniformity is imbued into every element of the yacht’s design, which combines a plumb bow, generous flair in the forward sections and ample tumblehome in the rear. Long and wide side-decks are matched with a clean and open foredeck with a ‘touch and go’ helipad. “I wanted to make the design as calm and elegant as possible and create a feeling of serenity. All of the lines are an integral part of the boat: we went for the basics of what the boat could be. For that, we needed a client who could respect and trust the basic form of the yacht. In terms of details, these should be the kind of things that don’t jump out at you: everything should be hidden, but still there at the same time.” Indeed, the subtle and personal, Japanese-inspired details found in the vessel’s interior design by Sinot Yacht Design also work in concord to create a sense of calm on board.

When designing Syzygy 818, considering how the owner would actually use the boat was Jämsén’s highest priority and resulted in features being added to the boat which had never before been incorporated into a Feadship, such as push-button operated handrails on the owner’s balcony and front-facing doors in the VIP stateroom on the upper deck. “Everything in the layout should be intuitive and be where you want it to be” explains Jämsén, “there is a clear logic behind it.” 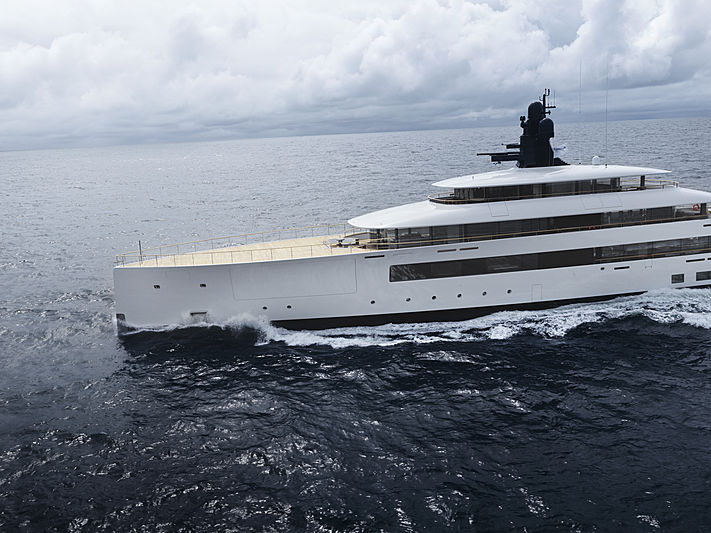 Photo: Tuukka Koski Jämsén’s desire to create this feeling of serenity on board reaches its apotheosis in the most remarkable element of the design: the 3 x 2.4-metre floor-to-ceiling double-curvature glass windows which are found in the superstructure. Taking inspiration from the strip windows of the Bauhaus era (in which the window glass does not touch the dividing mullions) each window is made by joining four different double-curvature layers to give a stable reflection when the yacht is underway. “You might not see this when you are on board, but you really feel it,” says Jämsén. Naturally, these windows represented a major technical challenge for all involved with the yacht’s build. “I am heavily interested in new technology and pushing the boundaries of where the material can go,’" Jämsén adds.

When it comes to his design influences, Jämsén has kept himself out of what he describes as the “rat race” of superyacht design and adopts a holistic approach. “We think that, as the designer, I am the individual that creates the thing, but at the same time I don’t take credit for all the other designers who are pushing the boundaries and influencing me, whether this is positive or negative. We should think more like an ecosystem that represents a bigger brain than only my brain. Even if we were the most fierce competitors, there would still be a collaboration taking place and communication is happening between products.”

Photo: Tom van OossanenWith her original name taking its meaning from the alignment of three celestial bodies (although she is now cruising under the name of Pi as of December 2019), Syzygy 818 represents the somewhat fortuitous confluence of three key factors: the right owner, the right designer and the right shipyard, who have created one of the decade’s most remarkable superyachts, and one which fully deserves the much-overused adjective ‘innovative’.

As for how the stars will align for Jämsén’s next superyacht undertaking, only time will tell, but, in his own idiosyncratic way, he expresses a strong desire to keep it custom. “I design superyachts for a client, full custom, and it needs to be a fun process for both myself and the client. Without the client there is no boat: it is so much more than just an object.”He continues: “The things we have are avatars: you present some kind of image of yourself through all of your clothes, your cars, your watches and so on, and full-custom superyachts are the biggest avatars you can have, so they should tell a story about yourself. That is part of my work, that I try to communicate through the product.” Whatever the story is that Jämsén chooses to tell next, it is safe to say that it will certainly be one worth reading.

January/February issue of The SuperYacht Times newspaper out now