Recently launched by Hakvoort, the 50-metre JeMaSa represents another impressive achievement by our world-famous Dutch yard. The largest Hakvoort so far by volume, this yacht features a wealth of comfortable elements and ingenious design details. Smart logistics and a clever layout mean JeMaSa is optimised for owner privacy and for chartering. 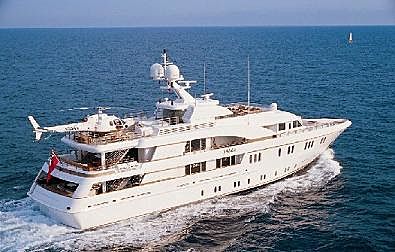 The original principal for the yacht that was to become JeMaSa had been working on the designs together with his captain for two years before being forced to withdraw from the project for personal reasons. The current owner implemented a number of changes to the original design, including reinforcing the helipad, which was originally planned as a touch-and-go platform, for permanent helicopter storage.

Built to Lloyd’s 100A1 specifications, JeMaSa has a naval architecture signed Diana Yacht Design, while her exterior profile originated on the drawing board of designer Espen Oeino. While the interior was originally also by Oeino and Michela Reverberi, the second owner’s family implemented changes devised by designer Barbara Barry based in Los Angeles. According to Oeino, the yacht maximises the space available and has a high volume for her length both in and outdoors.

Main deck
The main deck foyer is located on the starboard side, analogous to the lobbies above and below. They are connected by an especially striking stairwell conceived by Espen Oeino’s team: The central point of each step is fixed to an ellipsoidal strut that winds its way under the middle of the stairway along its entire length. A recessed deck light facing the climber is fitted into the strut above each step, creating a highly decorative safety feature.

The main deck lobby and galley, opening onto the starboard and port side decks respectively, divide the main deck into a full-beam owner’s area forward and a dining space and main salon abaft. The side decks converge in the aftmost portion of the yacht, which features comfortable seating areas and hot and cold buffets. Wind from the side decks can be closed off with sliding glass screens while air blowers above the seating keep the area heated or chilled according to season.

The comfortable main salon and dining room are finished in a variety of pleasant brown and beige tones. The dining room, which can effortlessly accommodate 12 guests, is connected directly to the galley forward. This spacious, convenient working area provides more than sufficient space and facilities for preparing and arranging gourmet meals. A dumb waiter terminating here reaches all the above decks and ensures that food can quickly and easily be served at any of the dining spaces onboard.

The owner’s stateroom forward is finished in teak and accessed through a pleasant office and lounge area. This area features a king-sized bed and opens onto a cedar-walled dressing room and beautiful, full-width bathroom with his and her shower rooms and an interconnecting bath section.

Lower deck
The accommodation deck below the main is comprised of five cabins. Two VIP suites offer generous, well-appointed spaces with ensuite bathrooms, while two slightly smaller staterooms are set up in double layouts. A fifth cabin with a bunk bed arrangement includes ensuite facilities. Inhabitants of the accommodation deck can enjoy an additional treat in the form of a comfortable massage room and spa adjacent to the accommodation area. The crew section, which includes a mess and five double cabins on the same deck, has its own separate stairway leading up to the main deck.

Bridge deck
JeMaSa’s elegant, well-laid-out wheelhouse was designed by Captain Juan Koegelenberg, who was with the yacht throughout her construction time at Hakvoort. Notable features of this area include the simple but effective leaning posts that reduce fatigue and the DekaSis alarm monitoring system. The latter was supplied by the Dutch firm De Keizer and never before seen on a yacht of this size.

The Captain’s cabin and office aft from this area lead on to the light and spacious bridge deck salon. Finished in white-painted woods highlighted with naturally stained cherry, this space is divided into three separate seating areas, one of which includes the opportunity for intimate dining. There is also a convenient bar and a practical guest office here.

The side decks running the length of both sides come together in two wide outdoor spaces. The covered aft area comprises a wide seating area as well as a large circular table that can seat 12 or be reduced to a more manageable size using a creative system of quadrants. The open forward space includes an impressive widescreen and an inspired semi-circular settee that can be converted into a wide bed. This arrangement easily transforms into a giant bedroom under the stars or an open air cinema.

The forward part of the bridge deck contains the practical mooring and anchoring apparatus and a capacious rope store. Another one of the special features that underline JeMaSa’s exceptional design is housed on the starboard side: The main tender stowage here is shielded from outside view by an inventive wing-like structure that opens to serve as a practical launching area.

Sun deck
The innovative split-level sun deck doubles as an al fresco dining area with a large table and dumb waiter going straight to the galley two decks below. At the aftmost end, a helipad platform with a cunningly disguised refuelling apparatus also serves as a rescue boat berth. Further forward, between the masts, is JeMaSa’s well-equipped gymnasium that opens onto the whirlpool tub abaft and the sunbathing area forward through glass doors. In addition to all the necessary fitness paraphernalia, the gym also has a convenient steam shower. The huge sunbathing area at the forward end of the deck can be covered for shaded open-air lounging.