In another world first Australian Company JetBoarder pioneers the way in the new sport of JetBoarding. Their newest model to be previewed at Sanctuary Cove International Boat Show in Australia is a real world first. 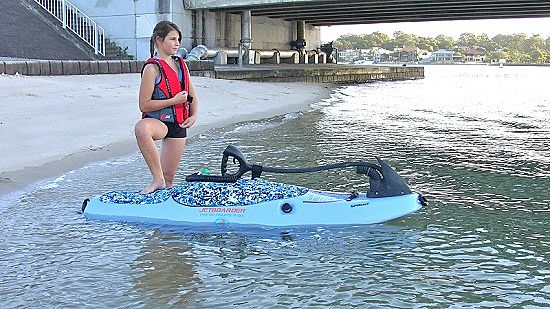 "We have today completed final testing of the worlds first Kids JetBoarder", advises Jet Captain Chris Kanyaro. Called the ‘Sprint’, the focus with the kids JetBoarder was safety first and fun second, in a new experience for kids aged 12 – 16 Years old. The Sprint Model achieves this plus more advises Chris Kanyaro. "We want to give kids the opportunity to enjoy the latest craze taking the world by storm’, in a controlled and safe environment. ‘In fact the inspiration came from some of our customers who wanted to take their kids JetBoarding."

"Safety first is our main priority" advised Chris. "There are a myriad of safety features onboard, which ensure kids can operate the JetBoarder in the safest way possible. We were reluctant to make the product available to 12 – 14 Year Olds., but under strict adult supervision, and operated in the correct manner, The JetBooarder Sprint, is a fun, safe new experience for kids to try".

With a top speed of 10 – 15 Knots, the Sprint is sure to delight any youngster keen to try ‘The Ultimate Ride’. The Worlds first kids JetBoarder, Eloise from Southport was able to stand up first time. "It is so much easier than I thought, turning is a bit tricky but that’s the fun, I learn and get better like any other sport".