Few owners ever fully understand the complexities of motoryacht design and construction like lifetime yacht enthusiasts, the late Jim Moran, and his wife Jan. Over a period of over 50 years, they commissioned scores of major projects, including seven Feadships. Launched between 1984 and 2006, all the Feadship's Gallant Lady(s)have a definite signature of their own, with Jim creating a design for each exterior and Jan overseeing the interior.

This relationship between the Moran’s and the Feadship brand grew over the years to one of trust and friendship, something that is certainly reflected in the repeat after repeat after repeat orders of new custom designed vessels. It’s not hard to see why he kept returning. Feadship has set the standard in the creation of custom builds for decades, whose designers work tirelessly to synthesise the visionary concepts of owners and potential clients into a personalised proposal that is ready to be built.

The Moran’s love affair with boats spanned over 60 years, and in this time, Jim Moran acquired an incredible 200+ vessels in total. But commissioning a new boat every year wasn’t always the case for billionaire Jim Moran. Growing up in a working class part of Chicago during the Depression, Moran was all too conscious of real financial difficulties. After working as a pumping gas boy in his childhood for less than 25 cents a day, Jim borrowed $360 in 1939 to buy a gas station. He soon started selling cars, and begun a journey that was to come one of the most lucrative careers in the automotive industry. Four years later, he bought his first boat, a 19 foot Chris Craft. As Jim’s automobile empire expanded, as did his collection of superior yachts from around the world.

25 years after the purchase of their first boat, Moran and his wife were well-experienced members of the boating community. This even included appointing Captain Joe Moore, who ran their Rybovich, to run a marine division of Moran’s business to oversee his ever growing fleet. Later on the opportunity to fully incorporate his and his wife’s own ideas in the construction of a yacht was a thrilling concept, and consequently begun the successful, prosperous relationship between the Moran’s and Feadship that lead to the construction of the ‘magnificent seven.’

The final outcome of every yacht built by Moran and Feadship was a well-designed and truly customised yacht. There are some features that were common to all seven; they were all built with a relatively low shallow draft for easy cruising in and around their favoured destinations in the Bahamas and Caribbean, and each also had the capacity to deal with substantial catering - a definite requirement of Moran’s needs of his ever expanding automotive empire. This clear emphasis on internal volume resulted in less outside space than most Feadship designs. Although the styling elements had obviously developed over the course of 23 years with Feadship, each one of the range remains recognisable as one of the Moran’s Gallant Lady(s), with the original specifications for the first Feadship commission remaining a constant source of reference. Jim Moran sadly passed away in 2007, but in 2008 he was posthumously honoured with The Superyacht Legacy Award recognizing his many contributions to yacht design, ocean conservation and enthusiasm for boating. 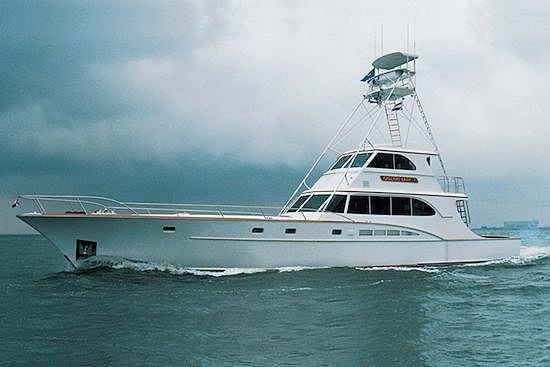 Gallant Lady I and II 1984 26.62m
These two Sports Fisherman yachts are constructed in aluminium, inspired by the Rybovich look, a specific style normally built for smaller yachts. Feadship was asked to take two larger versions while retaining the harmony of the lines and the relative heights. 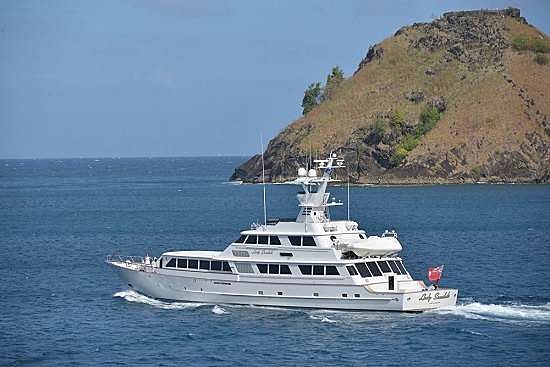 Gallant Lady -1985 - 40.07m
(Renamed Sea Ghost)
This was far more of a yacht than the previous Gallant Lady, with much more of a Feadship flavour than its predecessor. Gallant Lady II has a steel hull with an aluminium superstructure, a beam of 8.26 metres and 3 decks made from Teak. The yacht underwent a refit in 2007 and is equipped with an ultra-modern stabilization system which reduces roll motion effect and results in a smoother cruising experience. Sea Ghost has a cruising speed of 13.00 knots, max speed of 16.00 knots and a range of 3250.00 nm. 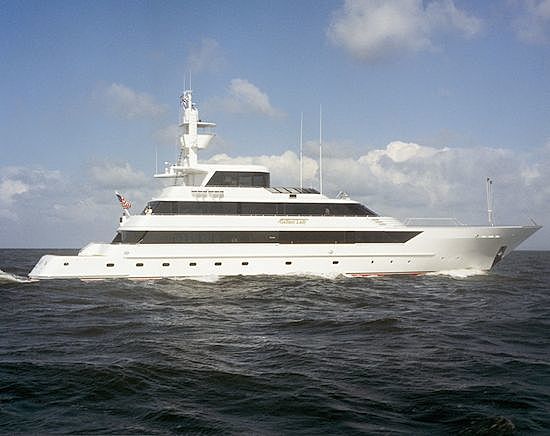 Gallant Lady -1988 - 50.90m
(Renamed Ice Bear)
Jan Moran really put her footprint on the interior design of Gallant Lady III, and the third of Moran’s Feadship fleet saw a request for a substantially larger displacement vessel. It is here that the level of complexity and detail in these yachts really began to accelerate. The 50 metre motoryacht was last refitted in 1999. She is powered by 2 Caterpillar (3512TA) 1,175hp diesel engines and propelled by twin screw propellers and is capable of a top speed of 15 knots, comfortably cruising at 12 knots. 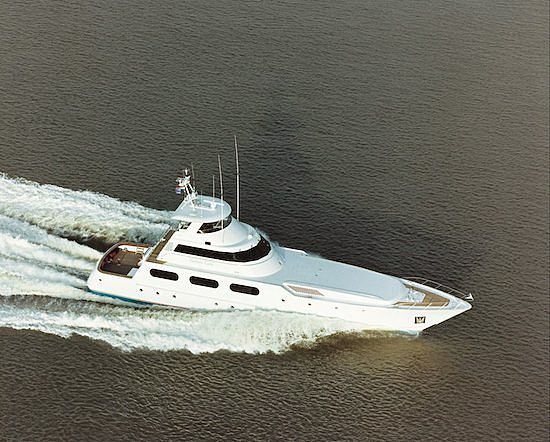 Gallant Lady -1988 - 35.35m
(Renamed Ozark Lady)
A replacement for the previous two Sports Fisherman and a considerable increase in size, Gallant Lady IV represented a significant departure from her predecessor. The comparatively traditional interior design showcases the yachting ideals in the designing of Associates In Design/Degeorge & Niedland, and undertook a refit in 1999. A moderate proportion is manifested with a widest beam of 7.22 metres and with a 1.83 metre draught (maximum depth), she is a reasonably shallow vessel. Twin 2400hp Detroit Diesel engines give Gallant Lady IV a range of 1,600 nautical miles at 14 knots. 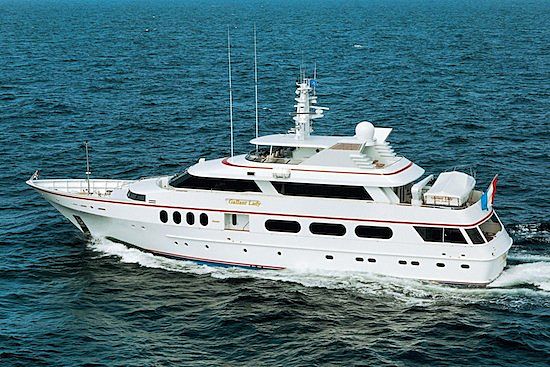 Gallant Lady - 1992 - 39.62m
(Renamed Never Enough)
The 39.62 metre motor yacht has completed an extensive refit in 2006, and now accommodates ten guests in five staterooms: an on-deck King Master, two queens and two twins. Gallant Lady V has an aluminium hull with aluminium superstructure, with a beam of 8.05 metres and a 1.98 metre draft. With a cruising speed of 125 knots, a maximum speed of 14 knots and a range of 3,300 nm from her 47313 litre fuel tanks, she is the perfect combination of performance and luxury. 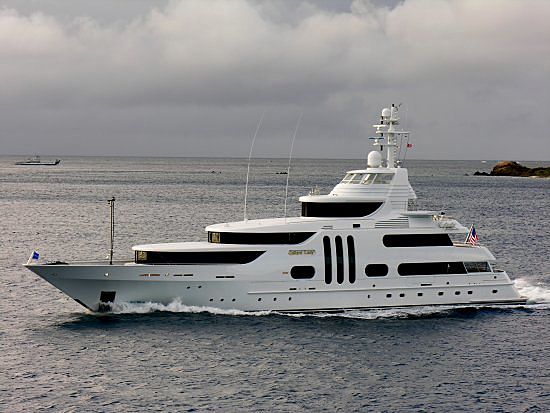 Gallant Lady -1995 - 52m
The design of blending the hull and superstructure in one smooth continuation was taken a stage further in 1992 with the sixth Gallant Lady, the largest yacht ever commissioned by the Moran’s. With a beam of 9.91 metres, she is luxuriously spacious. She had refit maintenance and alteration work carried out by 2008. Installed with twin Caterpillar diesel main engines, Gallant Lady VI can attain a high speed of 15 knots and has twin screw propellers for propulsion. 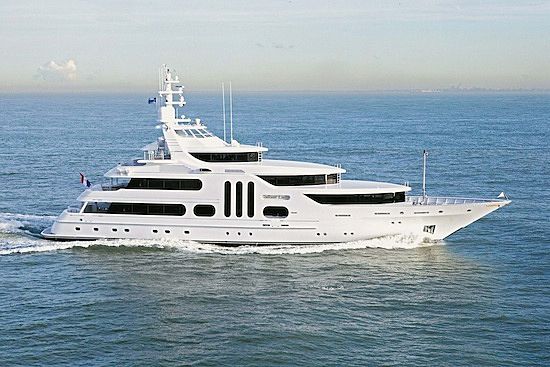 Gallant Lady -2007 - 51.21m
The last yacht to be commissioned by the Moran’s was the Gallant Lady VII, the seventh and final addition to their Feadship fleet that had grown over two decades. A key new styling feature is the pointed oval design of the forward section of the three superstructure decks, which helps give the yacht a slightly ‘meaner’ look. A large air handling room forms part of an innovative air-conditioning solution, which is easy to maintain and exceptionally quiet.