After a refit Jongert Shipyard has recently re-launched the superyacht Ameena, a Jongert 2900M-line yacht. The owner who bought the Ameena in 2004 brought the yacht back to the yard for a refit in December 2010. Now, five months later, the yacht is as good as new. In 2004 the Ameena, designed by Tony Castro, received the prestigious ShowBoats International Award for the best sailing yacht in the category up to 40 meters in length. 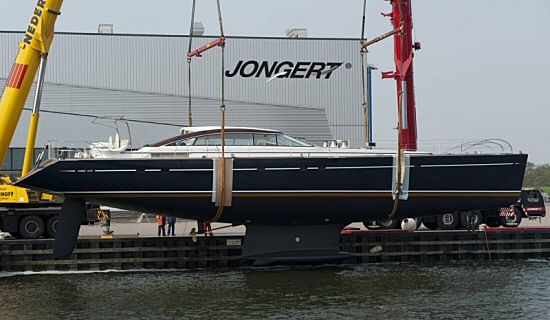 In the past the owner of the Ameena had already purchased a used Jongert yacht. He was so pleased with this yacht, that he commissioned the construction of a brand-new Jongert 2900M-line yacht. We are extremely proud that he has now chosen to have this yacht refitted by our yard. It happens more and more that owners decide to have their yacht refitted. It’s the logical thing to do. It isn’t necessary to buy a new yacht every few years like you buy a new car. A Jongert yacht retains her qualities for decades and a refit is a good solution to give her a new look, a new styling, and also to incorporate the latest technology developed over the years.

“We didn’t have a moment of doubt who would have to do this refit", states the captain of the Ameena. "Of course there are shipyards for instance in countries like Spain, Italy and Turkey capable of doing an excellent job, but the confidence we have in Jongert’s Shipyard, as well as the outstanding quality and mentality we have come to appreciate during the long relationship, is the deciding factor to have the refit done by them.”

The Ameena is a twin ship of the sailing yacht Scorpio Dei Mare hat last year won the Superyacht Cup Palma 2010, the famous three-day regatta. "The Scorpio Dei Mare is technically seen fully designed for racing; the Ameena, however, is built for cruising with a small or no additional crew. However, the Ameena has the same lines as her twin ship and is a fast sailing yacht as well. The owner has used Ameena extensively over the past years and in that period sailed faster than many racing yachts". The refit included a complete rigging update and a full check of all rigging, replacing parts where necessary. The mast has been stripped completely and the mainsail has been replaced.

As usual, during the refit, the drive system has been fully checked, the hydraulic system renewed and the water tank sandblasted. The yacht has been fully repainted and new carpeting has been laid in various areas. The Ameena is fully certified including of course a Lloyd’s certificate. Anyone who has seen the yacht before will then recognise her from afar. "The Ameena combines speed, luxury and comfort with a very own identity", says the project manager. "On both sides of the deck saloon a beautiful teak rim has been fitted, the eye catcher of this yacht. This striking feature has, of course, been left intact during the refit. She has a new styling, but her beautiful lines, her outstanding sailing characteristics and her typical looks have not been changed".