Joseph Artese Design has announced that the last of the refit installations are completed and the vessel, Alucia, is ready for service. Transformed from her previous life as the French built submarine tender Nadir, Alucia is a totally new vessel with a unique new mission. 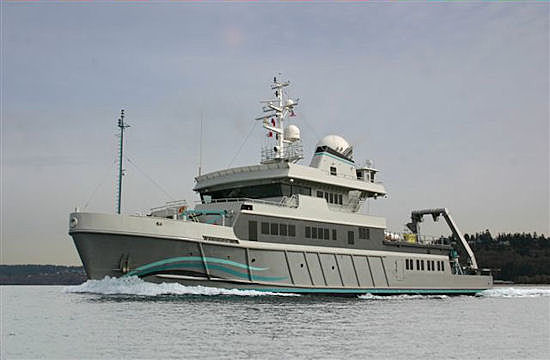 The artistic sculpting of her VIP decks by Joseph Artese Design provides the owner with a unique hybrid - a comfortable vessel to live-aboard in yacht quality surroundings that are combined with her prowess as a powerful and efficient exploration vehicle. With rebuild naval architecture from Kirilloff & Associates, the totality and quality of her rebuild has empowered her to do this for at least 30 years.

Artese was commissioned by Deep Ocean Expeditions to develop Alucia’s interior spaces and to provide some work on exterior cosmetics. As these clients are passionately involved in the preservation of marine life, are serious underwater documentary film makers and are also avid art lovers, these elements combined to form the inspiration and point of departure for designer Joseph Artese.

Artese laid out a whole new bridge deck structure from the pilothouse aft to include a grand salon and dining area with floor-to-ceiling windows which wrap around the aft end of the yacht. Artese chose limestone countertops that resemble the bottom of the sea. Her fundamental interior styling is clean, crisp and contemporary with a subtle undersea feeling involving maple joiner work, brushed stainless steel accents and an abundant use of stone as befitting a megayacht of this caliber.

The entire main salon bulkhead is a back-lighted aqua wall. Artese designed a series of two by three foot maple-framed electro-luminescent back-lighted Lumicor panels for this underwater effect. From here, a spiral staircase connects the observation deck above with the salon and then descends to the guest accommodation deck below, with the owner’s and VIP staterooms, four double/triple staterooms for the guests, captain’s cabin, and ship’s office.

The original accommodations deck was gutted and the 60’ long, straight, centerline passageway was transformed, expanded and articulated, to create the “Art Gallery” - as a design entity in and of itself - to display the lavish images produced by these deep sea explorers. Each of the staterooms opens on to this “grotto like” artistic display of fascinating marine life. At the aft end of the gallery is the helo-deck that also connects to the lower submersible deck. Guests arriving via helicopter get the first opportunity to view the latest in underwater photography as they pass through on the way to their accommodations and the bridge deck above.

Naval architect, Boris Kirilloff, engineered the project and designed a helicopter pad and hangar for both the bird and the subs which track to their respective berths. He also did extensive renovations of the crew’s quarters and science labs.

The rebuild was executed by Deep Ocean Expeditions, LLC in Seattle, Washington with A. Joseph Smith from Coastal Marine in North East Florida and crew overseeing. The Marine Artisans Group of Seattle fabricated and installed the interior under the onsite guidance of Jeff Brandewiede.