Joseph Artese Design has designed the new interior for the re-building of the 185’ M/V Alucia, the French built research vessel (formally R/V Nadir) which came fitted out with an A-Frame for launching and retrieving the three two-man submersibles. 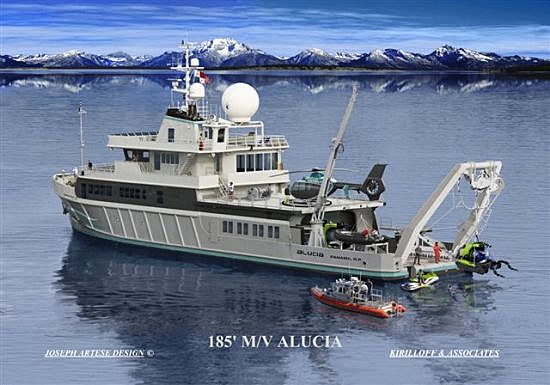 “The owners are passionately involved in the preservation of marine life, are serious underwater documentary film makers and are also avid art lovers. These elements combined to form the inspiration and point of departure,“ says designer Joseph Artese.

Artese was commissioned by Deep Ocean Quest to develop the 185’ M/V Alucia’s interior spaces and to provide some work on exterior cosmetics. Her fundamental interior styling is clean, crisp and contemporary with maple joiner work, brushed stainless steel accents and an abundant use of stone as befitting a megayacht of this caliber. 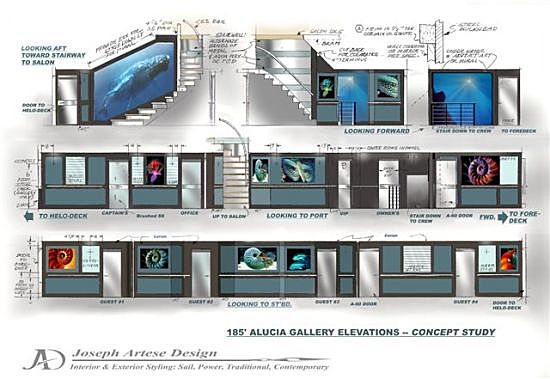 Artese laid out a whole new bridge deck from the pilothouse aft to include a grand salon and dining area with floor to ceiling windows which wrap around the aft end of the yacht. The windows include blackout shades for viewing the day’s rushes on a 50" plasma screen. Artese chose limestone countertops that resemble the bottom of the sea.

The client requested that the entire main salon bulkhead be a back-lighted glass wall. Artese designed a series of two by three foot maple-framed electro-luminescent back-lighted Lumicor panels for this underwater effect. A spiral staircase connects the observation deck above with the salon and then descends to the guest accommodation deck below, with the owner’s and VIP staterooms, four double/triple staterooms for the guests, captain’s quarters and ship’s office. 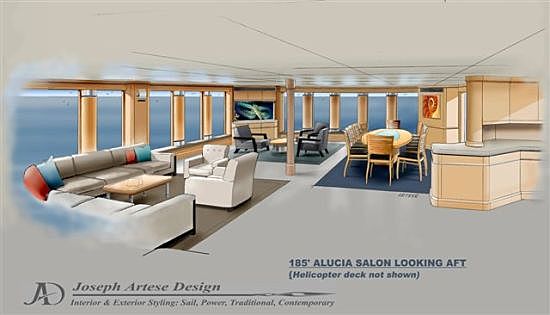 The original accommodations deck was gutted and the 60’ long passageway was expanded and transformed, to create the “Art Gallery” as a design entity in and of itself to display the lavish images produced by these deep sea explorers.

Each of the staterooms opens on to this “grotto like” artistic display of marine life. At the aft end of the gallery is the heli-deck that also connects to the lower submersible deck. Guests arriving via helicopter get the first opportunity to view the latest in underwater photography as they pass through on the way to their accommodations and the bridge deck above. 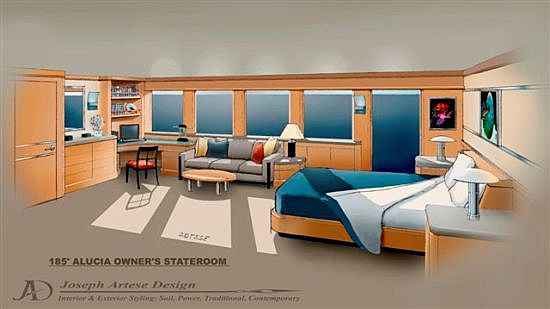 Naval architect, Boris Kirilloff, was brought in to engineer the project and design a helicopter pad and hanger for both the bird and the subs which track to their respective berths. He also did extensive renovations of the crew’s quarters and science labs.

The Marine Artisans Group fabricated and installed the interior. The rebuild is fully underway in Seattle by Deep Ocean Quest and is expected to be fully operational and ready by February 2009.