K&M Yachtbuilders have delivered their largest yacht to date, the 88 foot aluminium Tulip, designed by the renowned German Frers. The name, Tulip, is fitting for a yacht with a Dutch owner. The yacht will also be flying the Dutch flag. 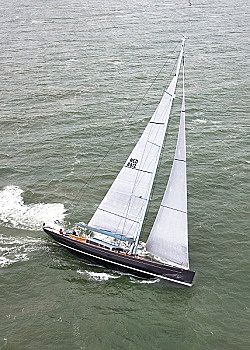 Together with German Frers Jr., the owner has designed an one-off yacht with a classic hull shape above the water line, but modern features below the water line, such as a lifting keel and flat underwater ship. The success of this combination of classic and modern features can be seen in the upswept stern and modern superstructure. This ‘classic sloop’ in fact constitutes an innovative design in the yacht building industry as a whole.

During trial runs on the Wadden Sea and North Sea, both the owner and the designer German Frers Jr. were full of praise for the yacht. The 215 hp engine is almost silent, leading onlookers on shore to believe it was a hybrid engine. Seagoing behaviour is quiet and stable, even at force 7 winds, as was experienced during one of the trial runs.

Participating in regattas is one of the owner's wishes. The shipyard translated this into a lightweight construction for the ship. The use of lightweight materials in the interior, a light aluminium structure and carbon rigging has kept total ship weight at just 51 tons.

Thanks to its lifting keel, Tulip has a variable draught from 3.20 m to 5.10 m. The draught of the keel is of course also advantageous in terms of sailing characteristics. The superstructure strikes the eye, also because the rest of the deck has been kept clean and flush. The metallic ice-blue colour of the exterior of the superstructure has also been used to spray the 33 metre long carbon mast and Park Avenue boom. The deck is covered with teak, light grey rubbered, similar to the colour of the mast and superstructure.

The cockpit is wide and long. K&M Yachtbuilders themselves have made the aluminium steering wheel with a 2.20m cross-section. The cockpit benches next to and behind the steering wheel can be rotated so that they disappear flush into the deck when not in use. The back rests of the fixed cockpit benches have been fitted with a glass screen that can be raised for additional shelter from wind and spray. Functional, but beautiful and innovative at the same time. The aluminium hull has been sprayed with a dark-brown metallic paint. 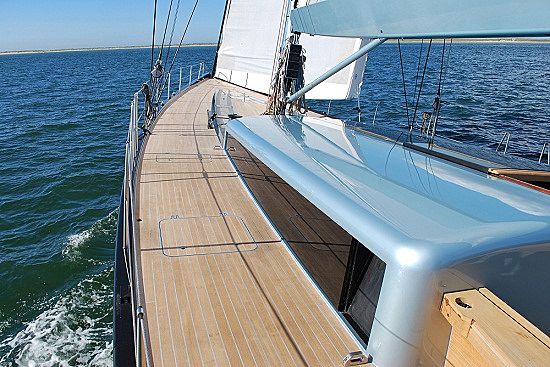 To avoid breaking the sleek lines of the yacht with an anchor, a hydraulic anchor tipping system has been developed. When about to anchor, the stainless steel anchor beam is moved up from the flush anchor tray and across the bow of the yacht. As the anchor beam reaches far out from the bow, the chance of damage when lowering or pulling the anchor is small.

The deckhouse saloon is the main on-board living area. Windows all around and in the ceiling bring in light and air, imparting a sense of spaciousness and openness. The dinner table, map table, television corner and refrigerator are all located here. 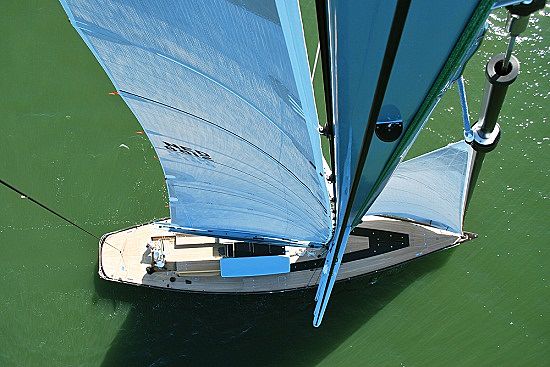 Both guest cabins also have their own bathroom with shower and toilet to ensure privacy for both owner and guests. The walls have a honeycomb structure, not only to reduce weight but also for its noise-insulating properties. All cabins have been finished with oak walls, while details such as coves and borders are made of dark rosewood. The guest bathrooms also have red marble floors and leather upholstery in the cupboards, in brown and red colours. The well-equipped galley has been strategically placed in the rear of the ship, within easy reach of both the sitting room and the crew area. There is a separate cabin for two crew members, with a bunk bed and a bathroom. The engine room, which is located below the sitting room, can also be reached from there. The technical area can be accessed through a flush hatch located next to the deckhouse.

The ship has of course been styled according to the taste and demands of its owner. Natural colours such as brown, beige and cream alternate with a powerful dark orange in the upholstery. Floors and cupboards have been finished with stitched leather. Shipyard owner Eeuwe Kooi: "This ship is not just special for me and for our shipyard because it is our largest yacht to date, but also because we have really achieved this beautiful end result together with the owner. We first started talking about this more than three years ago. During preparation and construction we talked regularly, even daily during the last few months. You are literally building something together, and it's very special to finally see the end result. I am not only proud of the yacht, but also of our shipyard employees. They have shown that K&M is able not only to build pure aluminium no-nonsense ships but also luxury cruisers.”

After a festive inauguration, Tulip will set sail for the Mediterranean, where it will take up its permanent berth.