Karpaz Gate Marina Ltd, the new luxury marina based in the Turkish Republic of Northern Cyprus (TRNC), has filled the key management position of Harbour Master ahead of the marina’s forthcoming completion and soft-launch in May 2011. The new recruit, Captain Deniz Akaltan, will officially take responsibility for the management of the marina from May although will begin working with Sea-Alliance Group – the marina management team – immediately. 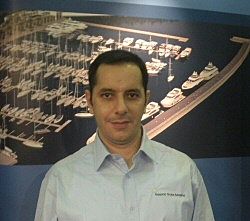 Captain Akaltan, 34, joins the Karpaz Gate Marina team with a wealth of relevant marina management experience and related industry expertise. He is highly proficient in English as well as his native Turkish, and was previously Harbour Master of Atakoy Marina, a leading marina in Turkey, where he was involved in all aspects of marina management. In addition he has more than eight years of experience as a Harbour Manager while working at a marina yacht club, during which time he organised international yacht races and rallys including the International Black Sea Yacht Rally, the Eastern Mediterranean Yacht Rally, and Turkey’s most well-attended race, the Vakko Sailing Cup.

As a licensed sailor and an Ocean Going Deck Officer, Akaltan has also been a yacht captain and has worked for the Turkish Sailing Federation. He is also a graduate of the IstanbulTechnicalUniversity’s Maritime Faculty.

Itay Singer, Director of Sea-Alliance Group said: “It is an exciting time at Karpaz Gate Marina and we are thrilled that Deniz has joined the team as we get closer to the completion of the build. His extensive experience perfectly complements the existing administration and management team, and together we are looking ahead to a bright future –not only for Karpaz Gate Marina but also for the TRNC – as it becomes an established first-class yachting and sailing destination in the eastern Mediterranean.”