In April the keel was laid of the new schooner Atlantic at the Van der Graaf yard. Two keel sections have been built upside down and by turning them the official moment of the laying of the keel was constituted. Seven more sections are being constructed to complete this strikingly large and slender three masted yacht. By the end of the year the motorized vessel will be launched, after which fitting out and rigging is expected to take another two years. 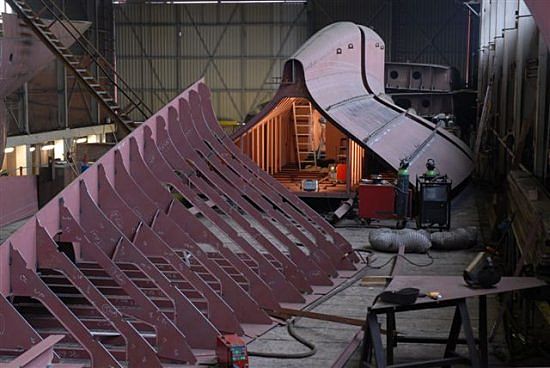 The original yacht was launched on July 28th 1903 and gained enduring fame in 1905 under command of the notorious captain Charlie Barr winning the golden Kaiser’s Cup in a race from New York to The Lizard on the south-west coast of England. The cup appeared to be a plated fake later, but the mono hull record time of 12 days, 4 hours and 1 minute stood for 100 years, until it was broken in 2005 by Mari-Cha IV, setting a time of 9 days, 15 hours and 55 minutes in the Rolex TransAtlantic Challenge. 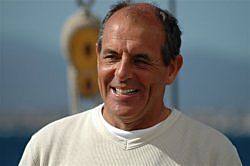 The Atlantic was designed by William Gardner and built by Townsend & Downey, Shooter Island, New York. The schooner measured 56.43 meters (185’) over the bows, excluding bowsprit and mizzen boom outboard of respectively 8.76 meters (28’8) and 4.05 meters (13’3). With her beam of 8.85 meters (29’) and draft of 5.00 meters (16’5) her displacement was 395 tons. The replica is commissioned by Dutchman Ed Kastelein (left photo). He gathered copies of drawings of the original schooner from various archives in the USA, amongst which the MIT Museum in Massachusetts, which Doug Peterson, acting as consulting naval architect, has digitized guaranteeing the authenticity of the lines and floatation.

The structural designs for the construction by today’s methods and materials, like welded instead of riveted hulls, have been produced by the naval engineering company MasterShip at Eindhoven. They too have completed the task of updating the design without changing an inch to the sacred aesthetics of the original. In the old design for example all 96 steel frames were spaced at 558.8mm (22 inches) and this has been adhered to for the sake of authenticity. The building takes place under Bureau Veritas classification for charter yachts. 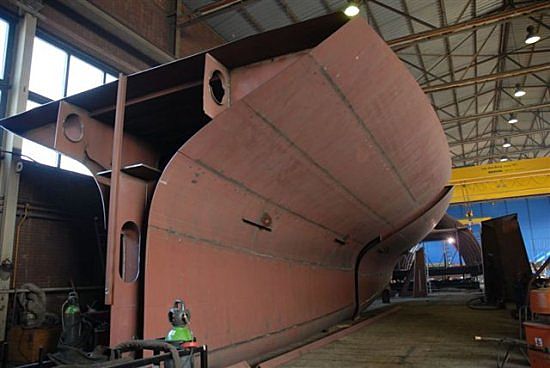 140 tons of Lloyds grade A certified steel have been plasma cut into 3,000 pieces of different shape and thickness. The keel plate is 20mm, the hull plating is 8 to 6mm and the deck is 5mm. After the forming of the hull plating, eventually all parts will be transformed into the most beautiful hull shape ever. The construction is divided into nine sections and the first two keel sections have now practically been finished (photo above). The next seven sections will also be built upside down. While the main, fore and aft deck will be constructed on contra-templates to preserve the camber of the deck. The use of temporary aluminium bridge straighteners on the outside of the hull plating will assure the smoothest possible surface to avoid excessive use of fillers later. Finally all sections will be joined.

30m³ of teak are drying to be spread out over the deck and around the bulwark and 58m³ of mahogany are waiting to be used for the interior paneling. The teak deck houses, hatches and skylights are being copied meticulously from illustrations of the original. The winches with bronze drums to contemporary design will be powered electrically, unlike the original steam driven units. For equipment like the anchor chain stopper, stanchions, belaying pins and pin rails new casting patterns are custom manufactured based on original designs. From the different sail plans of the original the record setting 1905 rig of 1,720m² (18,500 square feet) has been chosen for the recreated yacht. The original rigging had tapered steel tubes for the lower masts and bowsprit, but only the bowsprit will remain in steel. The base of the new 45 meters long masts will be made of alloy with the top masts, booms and gaffs to be built in Sitka spruce.

Back in 1903 the Atlantic was built as a true mega yacht with every imaginable luxury at the time, like electrical power, refrigeration and warm running water. But in terms of comfort below decks she would still not bear comparison with the new schooner, which eventually will serve for luxury charters. The main saloon will be finished Colonial style with mahogany panels and furniture. The staterooms too will be executed in mahogany and light cream colors will prevail. Accommodation is foreseen for twelve guests, including a large master stateroom with library, private head and bath amidships. A modern galley will assure the catering and a pantry and laundry will provide for the household backup. The captain’s cabin is aft and crew quarters for 10 are located in the forepeak with separate deck access. In terms of space for the crew no parallel can be drawn with the old days when 39 crew and officers lived on board all year round.

Atlantic will be sailing again soon and she will be as breathtakingly beautiful as ever. The myth is being created!