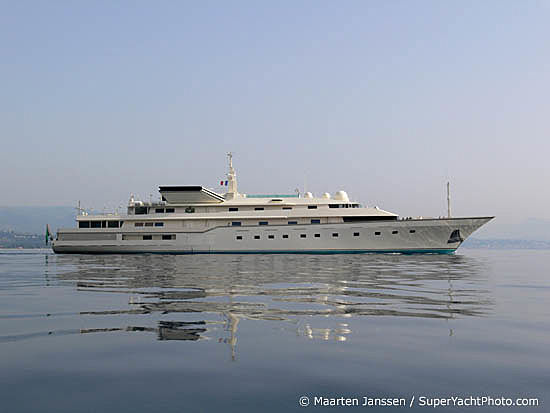 The legendary Kingdom 5KR started out life as Nabila, in 1980. She is designed by Jon Bannenberg, and at the time of her launch, she was one of the largest yachts in the world. Nabila became Trump Princess in the late eighties, and was sold once more in early 1990's to her current owner. Even though she is almost 30 years old, her looks have not been altered too radically since her launch. She had a refit at Amels in 1993, but only minor changed were made to her exterior, which included small alteration of her aft decks. A few years ago, her current owner appeared in a documentary, where he was presented with designs of a replacement yacht, designed by Andrew Winch. However, there has been no official announcement by the designer, or by any shipyard, of the existence of a new Kingdom 5KR.