Kingship is scheduled to deliver the Columbus 90 to its owner in the Autumn. The yacht was rolled out of the shed and hit the water in early July for preliminary trials. 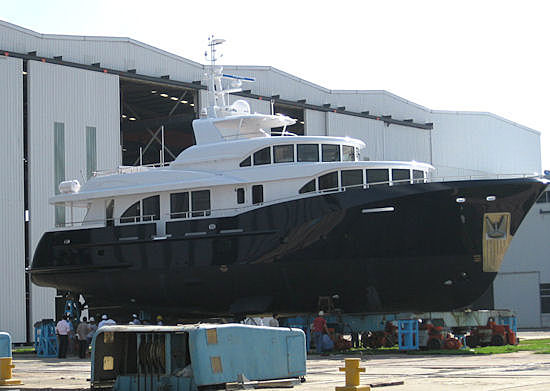 Designed and engineered by Vripack International, the concept of the Columbus 90 is to build a sophisticated yacht in compliance with a Classification. “This is a real challenge. Although this small yacht (27m) is made like a Swiss watch, it is equipped with most of the systems of a larger boat,” said Roger Liang, managing director of Kingship.

Being a semi-custom design, there are several alternatives for the interior layout. This yacht has four guestrooms accommodating eight guests served by four crew members. The interior styling can be further transformed according to the client’s wishes. The all-rounded large windows in the owner’s stateroom provide an extraordinary panoramic view for the guests from their bed.

The Columbus 90 is powered by two C18 Caterpillar engines and cruises up to 10 knots with a range of 4500 nm. She is also built in compliance with Lloyds and MCA and available for charter in the Mediterranean in 2010.

The 33m Kingship Relentless in Fiji