A 2001, 52m Benetti, Midlandia is newly signed up for sale by Chris Cecil-Wright of Edmiston & Company’s Monaco office. Asking euro 27 million (some 20% more than a 1937 Matisse painting). 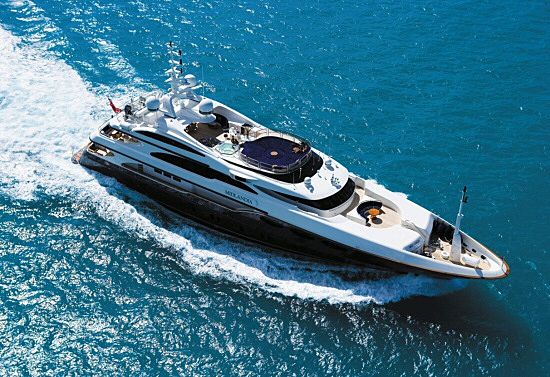 Midlandia is described as having “immense presence, matched only by her volume”. The challenge for the naval architect Stefano Natucci and interior designer Francois Zuretti, was to create shapes and styles that were as efficient as they were graceful. Their success is self-evident. Curves form the basis of the entire design concept and there are very few straight lines anywhere on the yacht.

The sundeck has a circular forward sunbathing area (that converts into a helipad or dance floor), a circular dining table for 12 and two semi-circular seating areas. A Jacuzzi and bar complete the layout. The radar arch conceals a three metre drop down cinema screen.

The interior is unquestionably one of Zuretti’s finest. Occupying half of the internal space of the main deck, the enormous open-plan lounge has lacquered, inlaid ceilings with Tanganyika and Myrtle Burr panelling. A dining area comfortably seats 12 guests. The skylounge has a concealed two metre cinema screen and bar. Leading out onto the aft deck, a circular external dining area can be kept private with electronically operated curtains.

The six cabins include a main deck master suite with a private office, full beam bedroom and lounge, walk in wardrobes and twin bathrooms. A large VIP on the upper deck and two double and two twin cabins on the lower deck have deco-influenced styling with richly grained gloss panelling used throughout the yacht.

Midlandia has recently been thoroughly refurbished and is in immaculate condition.

Six more central agency agreements were appointed to Edmiston yacht brokers this month, including the 39.5m Solomia, a 36 knot, 39.5m Overmarine designed by Stefano Righini at euro 13.25million and La Mascarade a 30m aluminium Terence Disdale designed Feadship for euro 7.95million launched a decade ago, both also through Chris Cecil-Wright.

Superfun, for sale at US$9.5million through James Auld in Monaco, is a 1993 Italian 40 metre with a clean look – refitted three times since 2001 she is ready for a new fun-loving owner.

Steve Bridgeford, from the Cote d’Azur office, has an ‘icebreaker’ on offer in her early thirties – originally from Scandinavia but now residing in the South of France – preferably to somebody who likes helicopters and has a budget of up to euro 6million (5,995,000).

In the same office Russell Crump has a 30.5m, 40-knot Italian built GRP ‘rocket’ from Arno for sale at euro 9.5million. Named Friday, she is not for the environmentally-sensitive purchaser and a long weekend from Porto Cervo to St Tropez and back (her range is 350 miles with a 10,000 litre fuel tank) could see calls for you to plant a forest to make up for your decadence – but not from the girls flying into St Tropez on a Friday summer afternoon who will be far more interested in the iPod docking station and earthquake loudspeakers than your emissions.

Finally, the 34m B-17, a racy looking number, built of aluminium by Baglietto in 2007 and designed by Francesco Paszkowski, is MCA compliant, metallic-finished and ready to cruise into your life at 26 knots for euro 10,950,000 – call Tomaso Polli in the newly-renovated Edmiston London offi ce.

Two recent sales from the Monaco office include the Falcon Gold Digger by Nathan Farrelly and a Frers Swan 112 Highland Breeze by Jonathan Zwaans.

Meanwhile the charter team is anticipating a busy Caribbean season and giving the fleet and yacht crew some final inspections during the December Caribbean trade charter shows, ready to share their knowledge with the most discerning clients worldwide.