Bloemsma Van Breemen is currently working on two exciting new projects that illustrate the wide diversity of skills and facilities available at the yard. The comprehensive in-house expertise makes Bloemsma Van Breemen one of the few leading builders that can genuinely claim to specialise in both sailing yachts and motoryachts. Current projects include a 44-metre Beeldsnijder motoryacht and a 41-metre Dubois sailing yacht.

Enhanced facilities
Bloemsma Van Breemen’s increasingly prominent profile in the global superyacht industry has necessitated further changes at the yard, which has already been extensively re-developed in recent years. A new canteen is currently under construction for completion in October 2007. This complex will cater for around 100 personnel and subcontractors, and include dedicated offices and facilities for captain’s and owner representatives on the second floor.

The changes bring the total yard area up to 20,000 square metres, including 5700 m² of construction halls, 500 m² of offices and a 180 m² canteen. Bloemsma Van Breemen has the capacity to build yachts up to 65 metres in length. Meanwhile, the yard will soon introduce a new house style and website (www.bloemsmavanbreemen.nl) that will reflect its ongoing success story.

New Beeldsnijder motoryacht
The keel laying ceremony for a 44-metre (144’) motoryacht took place in May and a start has been made with the construction of the aluminium superstructure. One of the many impressive features of this project is that both the exterior and the interior of the yacht have been designed by Pieter Beeldsnijder. This will make it one of a very select group of large motoryachts to have a wealth of typical Beeldsnijder details both inside and out.

The upper deck of the yacht is dedicated to the owners. In addition to a luxurious stateroom, the owners will have their own private lounge and a terrace forward. Guests will not miss out on the pleasures of the al fresco life, however. An exceptionally spacious sun deck has various lovely areas for relaxation and sunbathing, plus a Jacuzzi, barbecue and bar.

Other highlights of this project include a sumptuous main deck, which will feature a lounge, dining room, galley and wheelhouse. The lower deck contains four guest staterooms, a captain’s suite and four crew cabins. In addition to a high-tech engine room that will display all of Bloemsma Van Breemen’s renowned expertise in the engineering field, the lower deck also has room for a good-sized lazarette to house the jet skis and other watersports toys. The motoryacht will have a maximum speed of 15.5 knots and a cruising speed of 14 knots. Its cruising range will be 3500 NM.

Dubois sailing yacht
Also under construction is a 41-metre (134’) sailing yacht, which is being created in conjunction with Dubois Naval Architects Design. The aluminium hull and superstructure have been finished in-house at Bloemsma Van Breemen and are about to be unified in the outfitting/finishing hall. 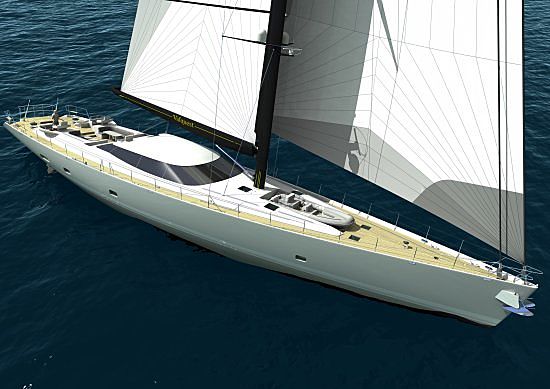 The all-aluminium construction will ensure a high performance yacht, complete with dual headstays, a roll-away boom with captive winches for all sail handling systems, and hydraulically operated running backstays. She will have a low profile deckhouse, a relatively high beam of 8.9 metres and a draught of 4.15 metres.

The flamed mahogany wood interior will feature a large salon, a master stateroom with walk-in closets, two double guest cabins and one twin guest cabin. In addition to the eight guests onboard, the spacious layout provides for good accommodation for six crew members, including separate dining facilities and a dedicated laundry.

Built to both Lloyds Register Classification and the MCA large yacht code, this spectacular new sailing yacht will have two tenders.

Flying Eagle and Griffioen
Two of the more recent deliveries from the Bloemsma Van Breemen stable are being extensively used by their delighted owners. The 48-metre (158’) Flying Eagle has clocked up some 40,000 miles of cruising since being launched in 2005, and is now based in her home port of Monaco. 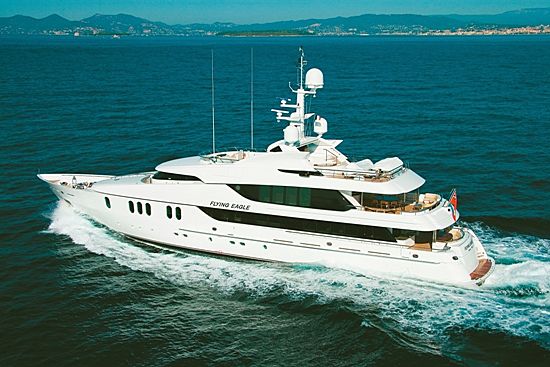 Meanwhile, the 27.50-metre (90’) De Vries Lentsch design Griffioen has just ended her maiden cruise to the West Coast of the USA and the Caribbean. She will be cruising in the Mediterranean this summer.