CNI’s presence at the Fort Lauderdale Show (FLIBS07) was their most successful to date with some stunning yachts on display, including the 48m Kanaloa from CRN, the 35m Azure Leisure form Palmer Johnson, and a 35m Benetti Classic Grand Coroto, amongst many others on display at one of CNI’s two locations at the Face Dock and the Las Olas Marina where new CA Griff was shown. CNI had an extremely successful show with some brokers announcing numerous offers on just the second day.

CNI’s VIP treatment
Reflecting the social scene, CNI hosted a couple of fun events during the show, including the annual Captain’s Dinner, held once again at Chima on Las Olas Blvd, in association with Bank of America. Global Marine Travel (GMT) graciously donated an air ticket for a raffle won by Captain Andre Peens of Princess Mariana. CNI’s Crewed Affair crew party, now in its third year, was held on the Friday preceding the show. This year CNI partnered with Dockwalk magazine and GMT in hosting what has become a really fun pre-show party. Over 400 crew, captains and friends, attended.

This year CNI brought a Carbon Neutral dimension to their participation with a fleet of hybrid cars to chauffeur clients around the show in. The distinctive green pennants could be seen from quite some distance which was useful considering the inordinate amount of traffic.

Those who came to CNI’s VIP outdoor lounge were ushered into the indoor Café due to the weather. The food was superb and ensured that a crowd of guests (and CNI staff) packed it every day of the show. On the opening day CNI were pleased to assist Yacht Accent, the yacht furnishings company, in hosting a small private reception to meet the designer Giovanna Locatelli. 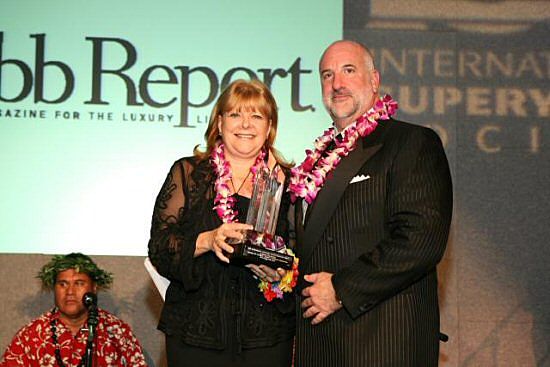 George Nicholson, Chairman of CNI, was recognized for his many achievements and involvement in the yachting industry by receiving the International Superyacht Society’s coveted Award for Leadership. The ISS held their annual gala dinner on 25 October at the Marriott Harbour Drive to a Polynesian theme. In Mr Nicholson’s absence the award was picked up by CNI’s CEO Jillian Montgomery. The event also saw Maltese Falcon snatch up a series of awards.

CNI onboard for the Superyacht Cup Antigua
CNI are one of the latest sponsors to sign up for The Superyacht Cup Antigua, which will be held in Antigua in Nelson’s Dockyard from the 12 – 15 December 2007. The SYC Antigua entry list currently stands at 8 yachts, including the 35m Sojana from CNI, with another 4 promising to confirm shortly. Following on from the Antigua Yacht Charter Meeting, the Superyacht Cup is a great way to kick off the Caribbean season, giving owners and crew the perfect opportunity to get out and do some great sailing before they go off around the Caribbean for the winter season.