The Shipman 80 is an entirely carbon yacht, built in Slovenia. This yacht combines world-class carbon work and sailing performance with a superyacht interior. Paula Rosa is the largest Shipman built to date. 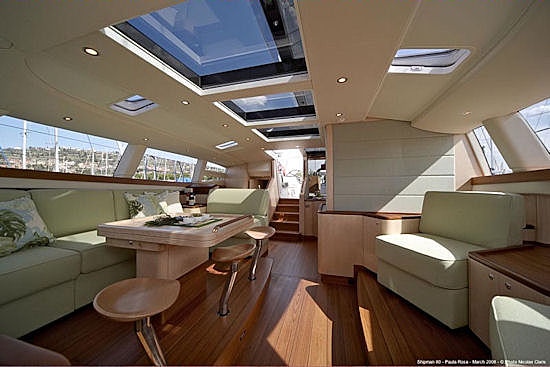 Rhoades Young were approached initially to create the interior for a 45m performance sloop. The idea of acquiring a Shipman 80 was born out of the Client’s desire for a superyacht but for her to be delivered quicker and for her to be smaller. Paula Rosa will be used in the meantime, until the larger yacht is completed.

In terms of her general arrangement she is very unusual. The brief was to maximise the space and to make her feel like a superyacht. The Rhoades Young team worked with the eye lines and diagonal views, pulling the bathroom in front of the owners cabin with a lobby off it, meant they could dispense with doors and open the space up. From the entrance doors you can see to the forward crew bulkhead, making her feel like a much larger vessel.

Dick Young first met the client in 2005 after he had fallen in love with the Rhoades Young interior for Gimla. Together they concluded it would be a far better solution to create a ‘made to measure’ yacht rather than trying to re-create it. The overriding concept was of geometry, simplicity and calm, which is accentuated by a very high level of design detail from both the design team and the yard. 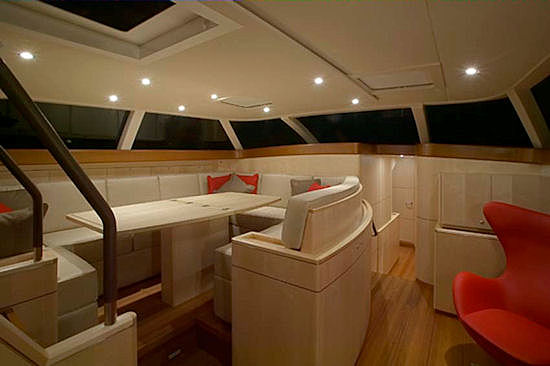 The project could be described as a ‘pocket’ superyacht, and included an independent crew mess, crew cabin and galley with a dedicated access from the cockpit. The guest area forward comprises of Owners cabin suite, VIP cabin, double guest cabin and a small study area, which spills out into the forward circulation by means of a large sliding door panel, which opens up the smaller spaces to create a feeling of space and light. The dimensions throughout have been absolutely critical, because with such a limited volume available combined with an extensive Client ‘wish list’, a complex and compact plan developed. Spaces interweave and reduce any potential wastage and volume.

The saloon’s relationship with the exterior was of key importance and special attention was paid to the eye lines. The coach roof windows finish flush with the deck revealing an uninterrupted teak deck, which flows directly into the interior seamlessly linking outside and inside.

The birch was carefully chosen for the furniture for its modern, calm feel and contrasts beautifully with the rich oiled teak floor throughout the boat.