On the 5th August, the keel was laid down for the 50 metre superyacht, Rainbow II. With lines based on big schooners from the early 20th century, she is being built by Holland Jachtbouw in Zaandam, with exterior designs by Dykstra Naval Architects and interiors by deVosdeVries design. 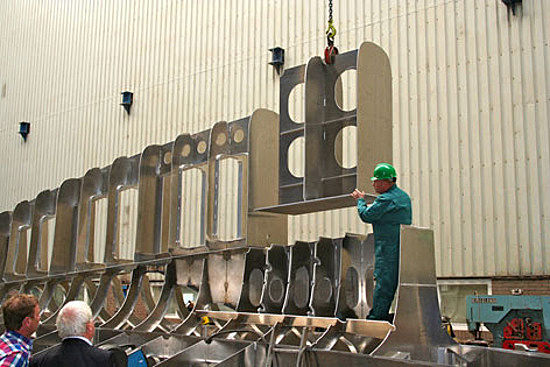 The hull will be constructed at the Made Shipyard in the Netherlands, and will be moved to Holland Jachtbouw early 2015, where she be finished in time for a summer 2016 launch.

The new schooner is to have a mahogany Art Deco style interior, and will be fitted with a hybrid power installation which allows her to sail on electric power. Fully charged from sailing, the batteries can be loaded sufficiently for a full day of consumption.

She will also be fitted with wooden spars, Dacron sails and traditionally hand crafted wooden blocks, all produced by specialist Dutch engineers. With around 1525 square metres of sail area, and an additional 823 square metres downwind, she will displace around 325 tons.

After her launch, the owner (who also owns 39.95 metre sloop, Rainbow) plans to attempt another Transatlantic record from New York to the Lizard, with the intention of beating the existing 10.5 days currently held by Windrose for over 12 years. The previous record was at 12 days, and was held by the renowned Charlie Barr for an impressive 98 years in total.