Leopard is, without question, one of the most famous names in yacht racing history and Leopard 3 ranks among one of the most stylish and technologically advanced yachts launched. The Supermaxi has broken countless world records and its charismatic owner and leading industrialist, Mike Slade, is one of the most well known figures in the sport. This year, Slade is celebrating 25 years of yacht racing and his 100ft Supermaxi has just completed an extensive refit at the Oyster Group's Southampton Yacht Services yard (SYS). For the last six months, Leopard has occupied the Custom and Refit Hall at the superb SYS waterside facilities in Saxon Wharf, alongside three of Oyster's fantastic, new Oyster 885s, the first of which will be launched in August for Formula 1 racing pundit Eddie Jordan's family trust. 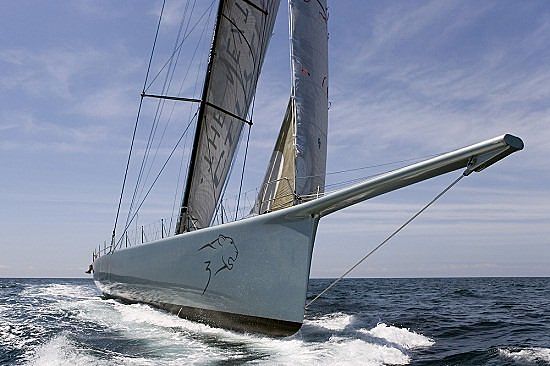 Leopard will make her return to racing following her refit at SYS in the J P Morgan Round the Island Race on Saturday 30 June, where she will be defending her title and the monohull record set in 2008 of 3hrs, 53 mins, 05 secs.

Chris Sherlock, Leopard's Captain for over 20 years, speaks about the six-month project to provide Leopard with a stunning, luxury interior.

Why did you decide to put an interior into Leopard?

Leopard was always meant to have an interior but for several reasons it was originally built without one. The owner has always wanted to cruise Leopard with his friends and family and he loves to live on board. Besides setting numerous world records and racing at grand prix regattas, Leopard is also in high demand for corporate charter and a full interior would definitely provide better facilities for guests.

Why did you decide to bring Leopard to SYS?

I know for a fact that if I had taken the boat to another yard and asked them to carry out the work, it would have cost far more than taking it to SYS. I went to several yards I have used over many years. One of them was in France and the labour rate was high and it would mean setting up base in another country with a foreign language. Carrying out the refit in the UK was the best option as the owner is here, the boat is VAT registered in the UK and it is also the yacht's home. In 2009, we used another yard for a major refit, which worked well. However this refit was a lot more technical and the expertise that I needed was very complex.

In 1992, Ocean Leopard was refitted at Saxon Wharf and Leopard 2000 had all of the electrical and hydraulic design and engineering carried out there. I took a drive down there and found out that one of the refit halls was available. I was delighted to find out that the same guys were still there 20 years on, which made me confident that I was going to get the job done and, more importantly, I knew that we would work as a team. It was a complex refit and I needed someone to work with us rather than give them the boat. So we started working out a deal with Technical Director, Harvey Jones and Managing Director, Robert Kathro.

I wanted SYS to handle the fit out of the new accommodation that would be going into the front of the boat but it had to integrate with the systems that had been so reliable for over four years. So I wanted to use the original team from Australia to design the new systems and SYS to implement it, as it would be far more economical. However this needed everybody to get on and I have to say that the end result is something that we are extremely pleased with.

Mike Slade was very impressed with the beautiful interiors that he had seen on Oyster yachts and also as Oyster has built so many boats, they have a really good understanding of what features really work. The original deal was a fixed contract with SYS to provide the new accommodation forward of the saloon but after seeing the standard of the work. I decided to employ them to refit the galley area as well.

SYS created the bespoke interior from scratch, manufacturing every piece of the interior on site at Saxon Wharf. We wanted a super-light composite interior but with an Oyster look and I think we have very much achieved that.

I have to say that SYS ticked all the boxes; a big enough hall, excellent skilled labour and we have worked with them over the years, which made us feel very comfortable. In the end it was a fair deal for us and for them. In fact, I signed the project off and SYS sent their quality control team down to have a final look and they put in three days of extra work touching up and French polishing, that's the attention to detail that they are accustomed to. We have ended up with a lovely product and it couldn't have worked out better, the quality of their work is fantastic.