Les Voiles de Saint Tropez is known for bringing together the most beautiful of both modern and classic racing boats - making a tour around the docks like looking into a magnificent show window of both the latest technology and architectural genius of centuries past. One looks from Esense to Senso One, which showcase all details of the modern, to the docks filled with the astounding cathedrals of sails belonging to Créole, Altair, Lulworth and Thendara. 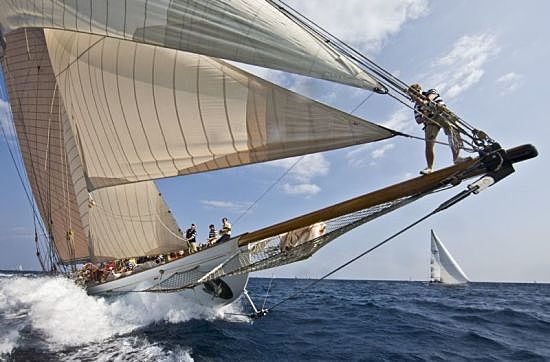 It is almost impossible to focus on a single yacht with all of the beauties that crowd the dock and transport this old fishing port back to historic times. Brought together these yachts arouse a curiosity and desire to learn more about the passionate men who were behind the drawing pen of these jewels. As of Tuesday, the Classic Yachts over 16 meters will join in the races to try their chances at taking home the Rolex Trophy. 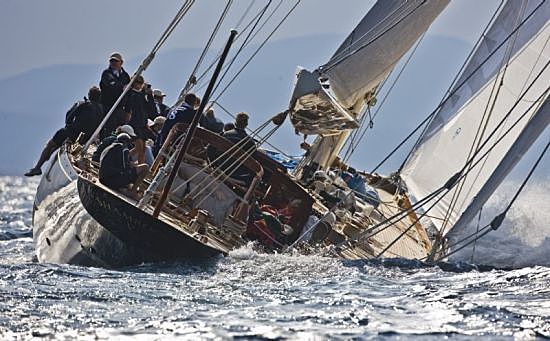 Since Monday night the port of Saint-Tropez has been filled to capacity as the Yacht Club de France's Autumn Cup came to a close and the yachts made their way here for the 2008 Les Voiles de Saint-Tropez. The division winners of the Autumn Cup are Shamrock V (Spirit of Tradition), Kookabura (12 MJI), Moonbeam IV (Classic Yachts), Nan of Fife (Gaffs) and Rowdy (Marconis). 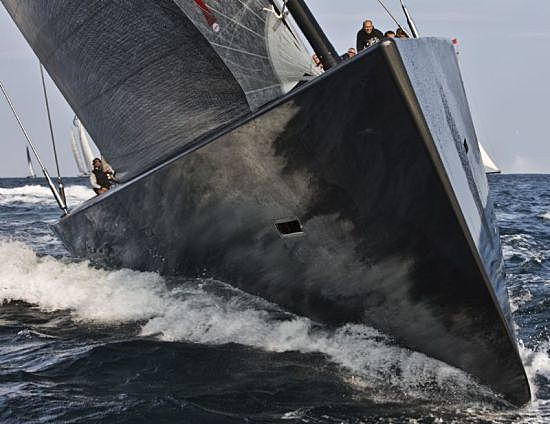 The journey from Cannes to Saint-Tropez finished with the classic yachts berthed alongside the participating modern yachts, finally completing the collection of exceptional masts, that are almost all over 40 metres high, for this year's edition of Les Voiles de Saint-Tropez. Last night was the official Welcome Cocktail and all of the teams came together in the race village to inaugurate the opening of the social programme that is an essential part of this world-renowned regatta marking the end of the Mediterranean sailing season.

Olin Stephens, a man of legend
Taking in all these great vessels that fill the harbour make one reflect upon the men whose designs have made these yachts a living legend. One of the greatest of these is surely Olin J. Stephens, a man who changed history with his designs and passion for building great yachts. Known as one of the greatest and most successful yacht designers of the 20th century, Olin Stephens' name will carry on for generations in the yachting community, a true man of legend. 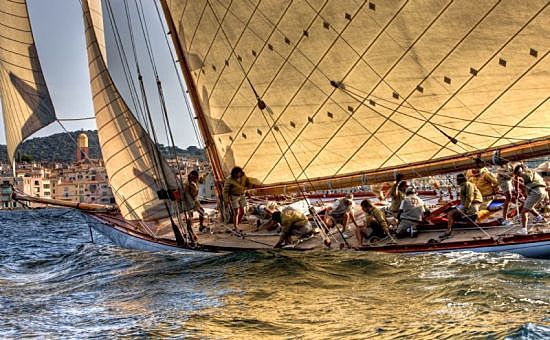 Born in 1908 in New York, Olin Stephens loved sailboats. His designs were often exceptional and the world had already begun to take notice when he was just nineteen years old. Stephens grew up sailing with his brother Roderick and the young Stephens dreamed of one day designing a monohull that would take home the prestigious America's Cup Trophy. The brothers Stephens joined in partnership with Drake Sparkman at the end of the 1920's to create Sparkman and Stephens, one of today's great yacht-design firms. 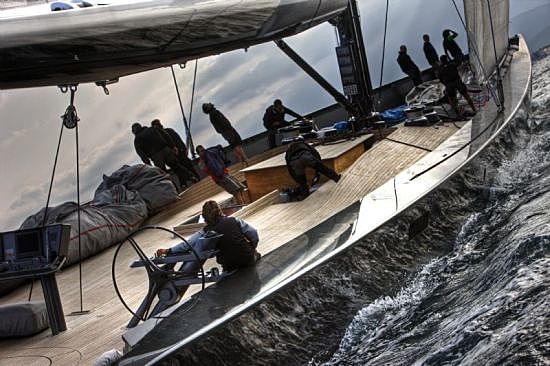 When the Great Depression hit the United States, the future of the firm was assured with the order of a racing yacht named Dorade. This 16-metre yawl proved to be a great success, winning race after race including the 1931 Trans-Atlantic Race and the famed Fastnet Race. Her success changed the face of yacht design forever, launching the yacht industry into the search for the fastest, lightest yacht possible. Following the Second World War, Stephen's designs were behind many regatta victories, from the Admiral's Cup to the One Ton Cup and beyond. Between 1937 and 1980 Stephens helped design six twelve-metre America's Cup defenders, winning eight out of nine editions of the famed “Cup”, including Ranger in 1937, Columbia in 1958, Constellation in 1964, Intrepid in 1967, Courageous in 1974 and Freedom in 1980.

In 1993 Stephens was inducted into the America's Cup Hall of Fame and in 2007 he was presented with a lifetime achievement award and chosen as one of the initial six inductees to the inaugural ISAF Sailing Hall of Fame. During his career more than 2,200 designs made it from the drawing table to the waters of the world. 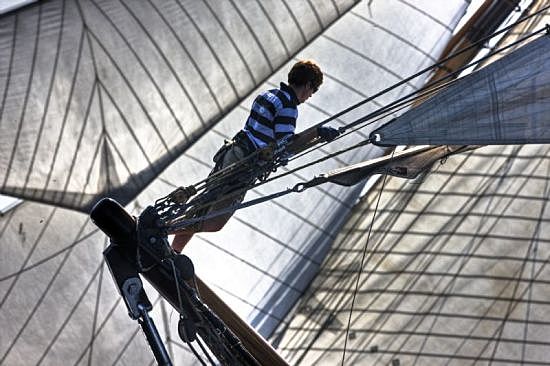 Olin Stephens celebrated his 100th birthday this year and passed away exactly five months later on September 13th, 2008. He had even written an autobiography, published when he was 90 years old, and the final few sentences provide insight to the man that changed yacht design forever as we look back on his life: "In all phases of my work I was conscious of the need for balance, and I did my best to find balance in both the long and the short view. Broadly, I think I can say that I applied the principles of balance in design, in business and in the pleasures I enjoyed.”

Stephen's Stormy Weather will be racing in the Tradition category during Les Voiles de Saint-Tropez 2008. Stormy Weather is known as one of Sparkman & Stephens most acclaimed early designs after Dorade and she is most known for winning the 1935 Newport-Bergen Race and the Fastnet. Stephen's is said to have designed Stormy when he was just 25 years old. 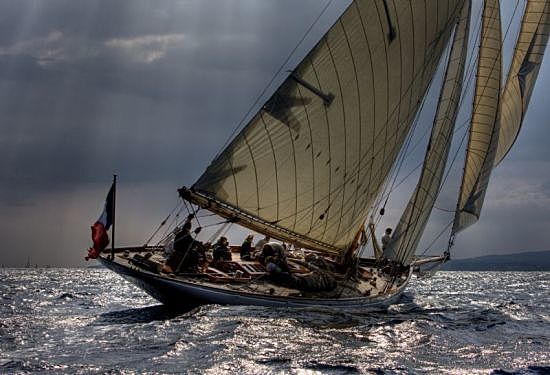 The Prize Giving Ceremony will be held on Sunday October 5th, starting at 11:00 (on invitation). 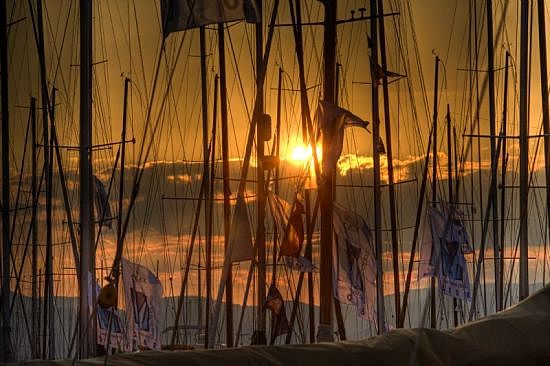 For the third consecutive year Rolex is in the “Partner Club” for Les Voiles de Saint-Tropez. This regatta, organized by the Société Nautique de Saint-Tropez (SNST), is part of the Rolex Yachting Portfolio that includes over twenty world-class sailing events that take place around the world. Rolex is also the title sponsor of mythic races such as the Rolex Sydney Hobart, the Rolex Middle Sea Race and the legendary Rolex Fastnet Race.