The grande finale of the yachting season – certainly for the classic yachts that all summer-long prowl the Mediterranean in search of competition and camaraderie – began today. Close to 300 yachts filled the Vieux Port and nearby marinas for the weeklong Les Voiles de Saint-Tropez, a ‘don’t miss’ stop on the yachting circuit. Spectacular fall weather conditions, a brisk mistral from the north with clear blue skies, prevailed on the first day to please competitors and photographers alike. 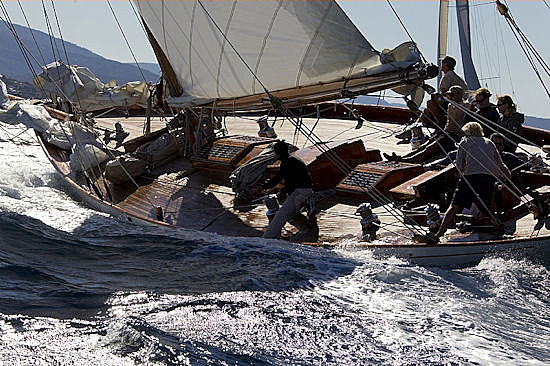 The Tradition class boats, which start racing tomorrow, don’t have the stage to themselves however; there is a impressive grand-prix fleet of “moderns” from maxi yachts such as the Judel Vrolik 72-footer Rán, straight from a win at the Maxi Yacht Rolex Cup in Porto Cervo, the Wally class’ towering 44 metre Tripp-designed Esense, to the Tofinu class, most of which at 9.5metres are just below the official minimum length, but this local fleet have been grandfathered in and seemingly up to the challenge of sailing on the same body of water as these comparative behemoths. 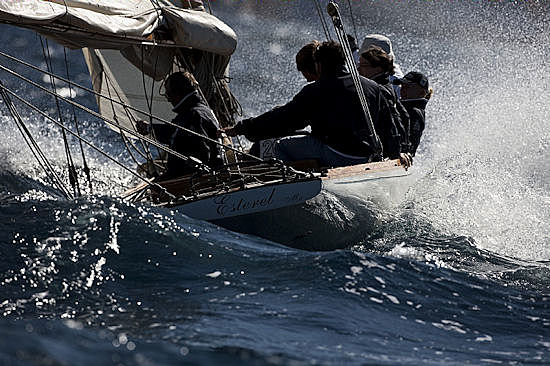 But it is the solely the Traditional class and, within this grouping, only boats 16 meters and over, that can compete for the Rolex Trophy – this year there are 50 entries eligible. The winner will be the boat with the overall low point score after the week of racing. The winning boat and skipper will be awarded the Trophy and a Rolex Submariner timepiece.

Racing for the Rolex Trophy is the 25-meter cutter-rigged, Halloween, created by the renowned Scottish yacht designer, William Fife III, from whose drafting table many famous, head-turning, and seakindly lines came, from the turn of the 19th century through the early 1900s. 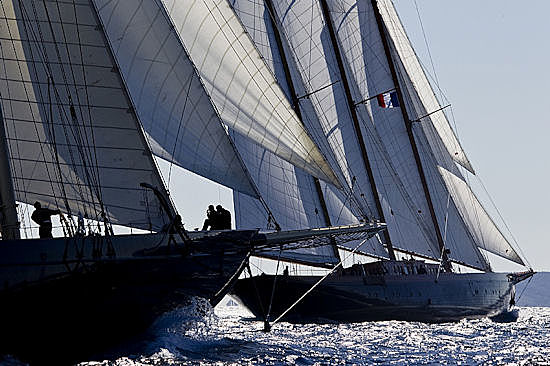 Halloween was launched in 1926 and was a new type of design for Fife, sort of a cruising version of the successful 15-Metre class, which included Tuiga and Lady Ann. With her original rig, Halloween was – and in fact still is – a powerful boat: shortly after her launch, she won the Fastnet Race and set a course record of 93 hrs, 13 mins (with the start/finish off Cowes). 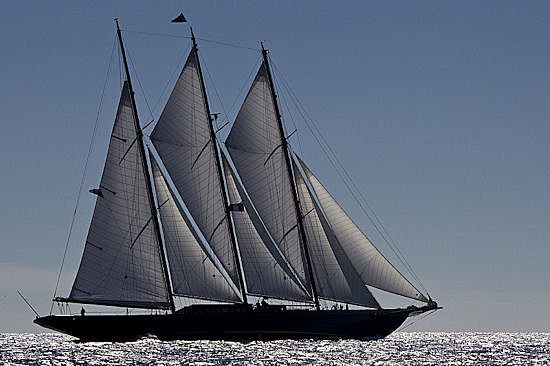 The boat changed hands and names several times over the years; as the yawl-rigged Cotton Blossom IV she was a force to be reckoned with, winning many races in the 1950s and ‘60s. She spent a decade in the Caribbean as a charter yacht, and was refitted in the late 1980s in Newport, RI. Then, sold again and taken to the Med, Halloween was returned to her original name and cutter rig, as per Fife’s original design. In a subsequent refit her mast was lengthened and boom shortened to allow for a more easier to manage permanent backstay.

Halloween newest owners bought her in 2006. Two of them, Michael Cotter and Dan O’Connor, were racing Dragons in the Med where they were told the 83-foot classic was for sale, and what started as an innocent inquiry ended up as an addition to the fleet. 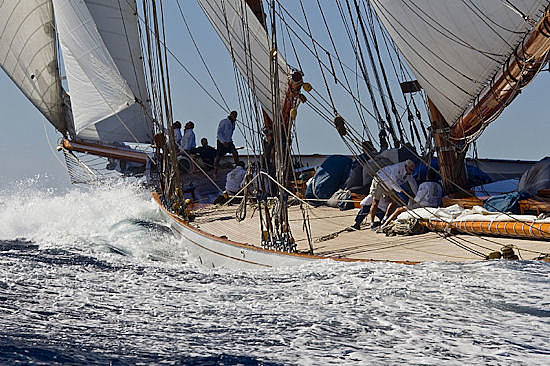 The owners, in fact, include five keen Irish sailors, from around Dublin, who have known one another for over 20 years, many of them active in the Dragon fleet and other classes as well. One of them, Michael Cotter, also owns a similar sized Reichel/Pugh-designed modern maxi yacht that he’s actively campaigned at the Rolex Fastnet Race, Rolex Middle Sea Race, and Maxi Yacht Rolex Cup, where he won class in 2009. But that carbon fibre and Kevlar-built boat is light years from the likes of Halloween’s teak planking on oak frames, yet Cotter and his happy-go-lucky band of friends seem to enjoy the best of both modern and classic sailing worlds. 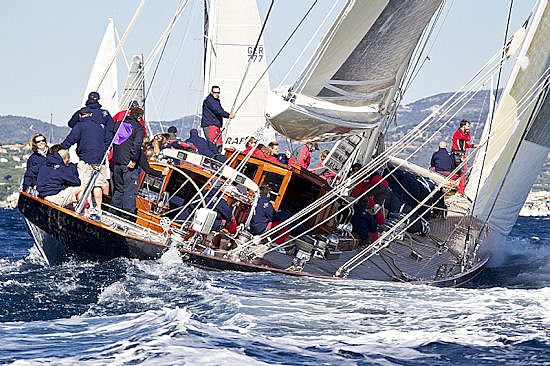 While the boat is regularly used, and shared, by all owners in a seemingly easy-going arrangement, it is also chartered for cruising and racing. Only a few classics with such a rich history as Halloween offer an opportunity to compete in an event such as Les Voiles de Saint-Tropez.

The Rolex Trophy
The Rolex Trophy will be awarded during Sunday's prize giving ceremony at the Citadelle.The very first winner of the Rolex Trophy in 2006 was the 25 metre Marconi-rigged schooner, So Fong. Designed by the renowned naval architecture firm, Sparkman & Stephens, So Fong was built in Hong Kong in 1937. 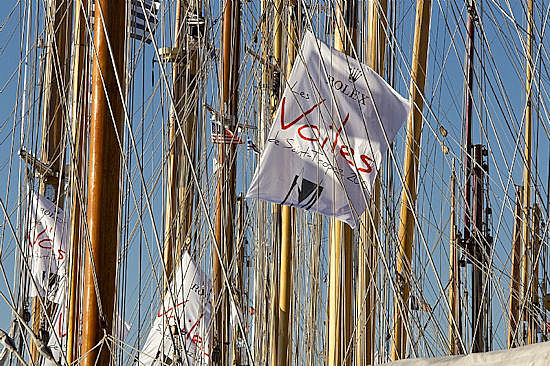 The 25 metre yawl, Agneta, built in 1951, won the Rolex Trophy in 2007. Agneta’s beautiful varnished mahogany hull and tanbark sails are unmistakable on the water.

But it is the Herreshoff-designed NY 40 class Rowdy, that all eyes are on this year. Rowdy won the Rolex Trophy two years in a row – 2008 and 2009 – and is back to defend her title for a 3rdtime! 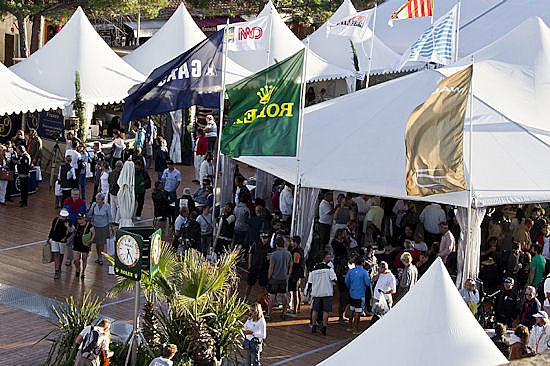 Rowdy is one of the New York Yacht Club 40 class, so named because the design was commissioned by the New York Yacht Club and is 40 feet on the waterline. Of the approximately 14 boats constructed, Rowdy is one of the few left. In addition to having a major refit, the boat has been optimized more recently, under owner Graham Walker’s care. Walker’s crew, including boat captain Jonathan Greenwood, have left nothing to chance, carefully tweaking and improving both the boat and how they sail her. Rowdy has enjoyed an impressive record on the classic circuit and she’ll be a formidable boat to beat. 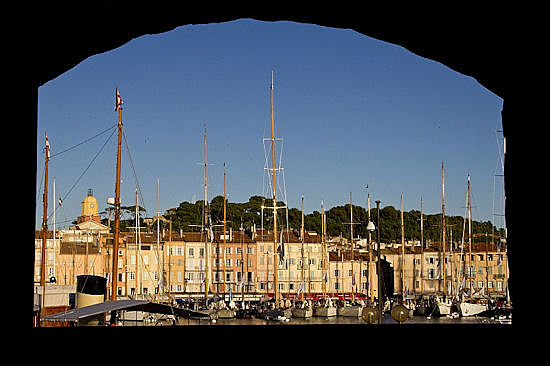