Another day in Saint-Tropez that required patience from competitors and the race committee alike. At the scheduled 11am start time for the Modern fleet, the breeze was unsettled and would take a delay of nearly two hours to get racing underway. The Moderns and Wally classes finally found breeze further offshore where they eventually started. 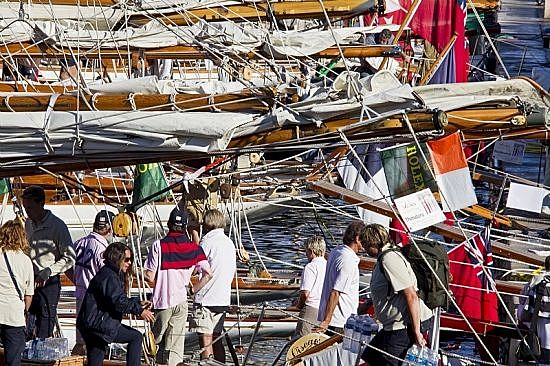 In the Golfe de Saint-Tropez, there was not a breath of wind to start, then at 1pm someone hit the wind switch and an easterly breeze filled in. 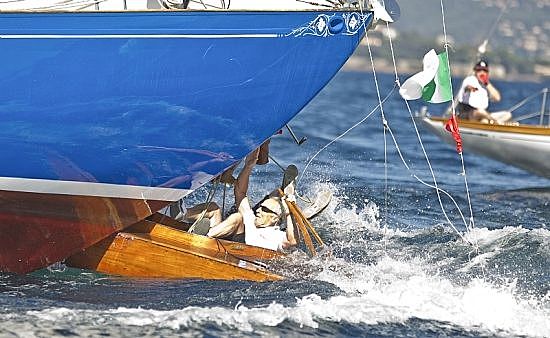 The ‘grand epoque’ big boat class that included Thendara, Altair, Elena, Sunshine, Milena, and Iduna got off the starting line around 3pm and were sent on a 14 mile nautical mile course that had a short leg to a mark upwind and then a downwind reach to a turning mark off St Raphael and a beat back to the finish line off of Saint-Tropez. 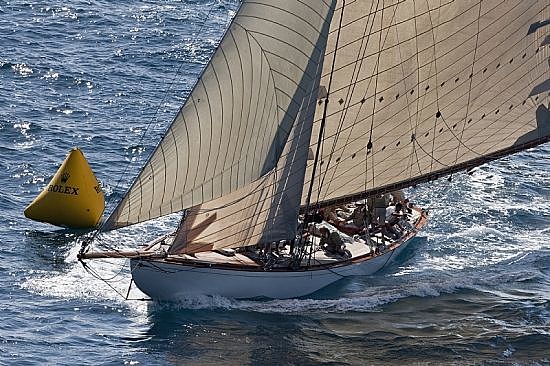 Les Voiles de Saint-Tropez, and La Nioulargue before that, has every year since the inception in 1981, included both a stunning collection of modern racing yachts, as well as traditional boats which date back over 100 years. At each and every regatta world-wide, where the classics sail, there is a specific criteria for what constitutes the “Tradition” class – here in Saint-Tropez it is quite simple: all boats built before 1975 – regardless of design or construction. 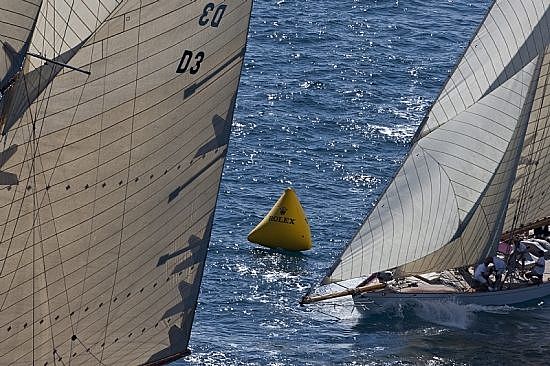 So the Tradition class at Les Voiles features an interesting mix which includes the oldest yacht here, Partridge, a 22.5 metre gaff cutter built in 1885, to an impressive collection of Fife schooners and cutters; the Sparkman & Stephens designed yawl, Stormy Weather; and Running Tide, a well-known American maxi from the late ‘60s. 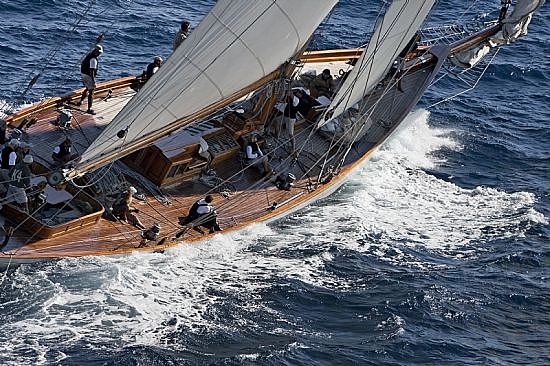 Newly launched last year and sailing here is the impeccable Herreshoff schooner, Elena. One year in planning and almost two years in build, the 55-metre (180’) gaff-rigged schooner, was meticulously built in steel, as a replica of the original Elena, built almost one hundred years earlier. The owner of the original Elena, Morton Plant’s directive was to build a boat to beat Westward, which in its’ day was one of the most competitive yachts and clearly the boat to beat. 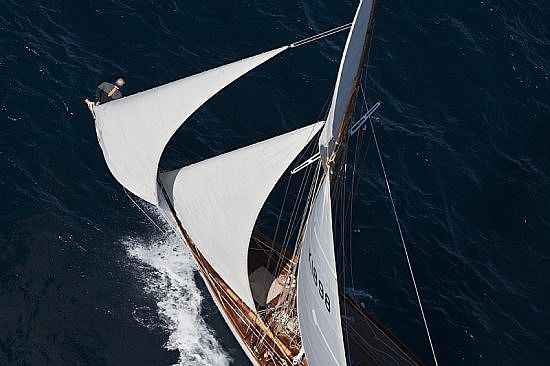 Elena is nearly identical to that of Westward – in fact above the waterline she is identical. But underwater, the keel was deeper, which moved the ballast lower and improved upwind performance. It seemed to work, as Elena went on to win the King’s Cup TransAtlantic Race from New York to Spain. 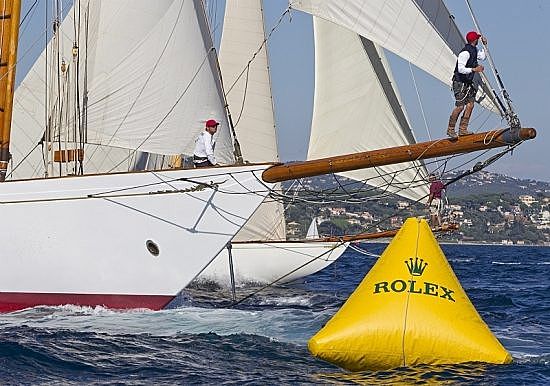 Today the ‘new’ Elena is under the command of captain Steve McLaren, who has previously been at the helm of the Herreshoff schooner Eleonora, and the Bruce King-designed Alejandra before that. McLaren exudes quiet confidence, a trait that is handy on the starting line steering a 215 ton, 180’ yacht into seemingly tight places. 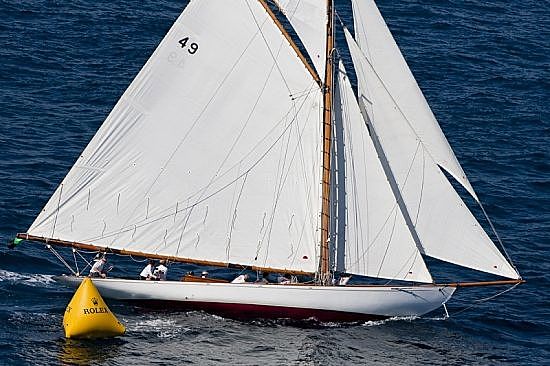 Elena regularly sails with a crew of eight, as she has for most of the past year chartering in the Med; here at Les Voiles, her only regatta his year, racing demands a competent crew of up to 40. 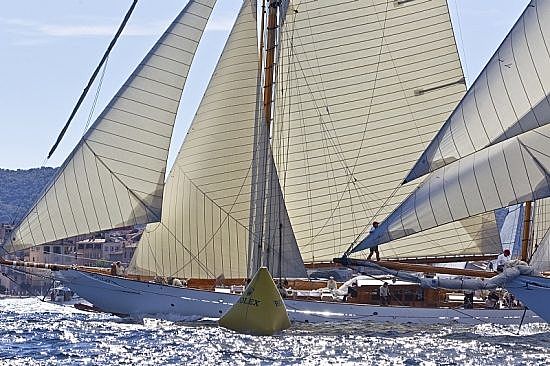 Elena was off the start line of today’s race at speed and in good position, with Moonbeam III below and Thendara and Altair just above and ahead. With a clear opening, Elena quickly found her pace, and by the downwind reach, had passed the others and took the lead on the water. 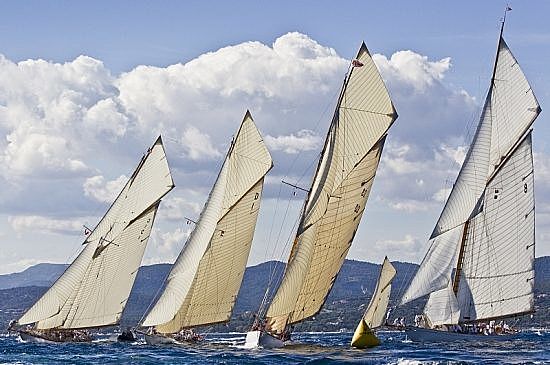 Her towering rig made of Oregon pine and Sitka spruce – the mainmast is 42 metres above the waterline – allows for an impressive 1180 sq m sail area upwind and 1800 sq m downwind. 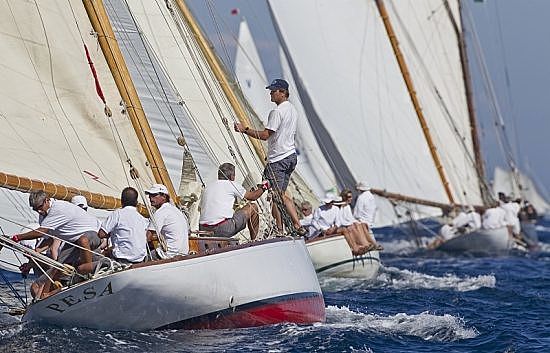 With a crew boss to oversee maneuvers, communication is key and with length on deck of 41 metres, a radio is used to talk to the foredeck crew. As well, with a draft of 17 ft, attention is paid near shore to make sure there’s enough water below. 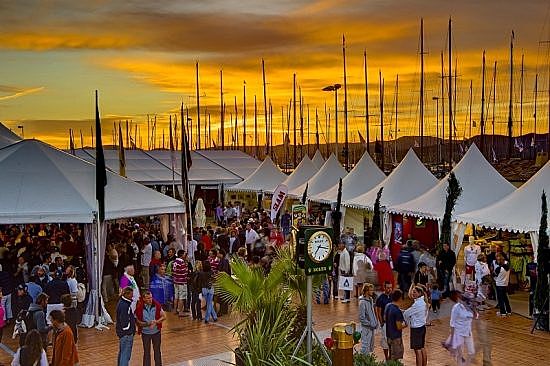 On the beat back to the finish, with the breeze shifting, Elena gained ground on both Thendara and Altair which together carried on further on starboard around the bottom mark legging out further offshore. With any luck, and lots of apparent skill, Elena may have saved her time on the others, but there are a few days of racing still up for grabs.