For the third consecutive year, the island of St. Barth, in the French West Indies, provided an exceptional week of racing. It seems the consensus of the 700+ sailors racing there that in just three editions, Les Voiles de St. Barth has become a must-do event on the Caribbean race calendar. Organizers have announced the dates for the fourth edition: April 8 – 13, 2013. 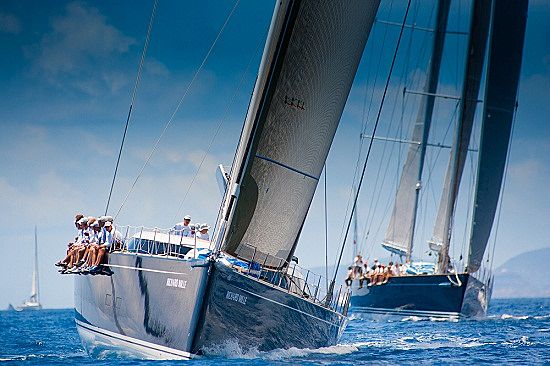 By looking at the number of entrants in the first three editions of Les Voiles de St. Barth – 28 in 2010, 48 in 2011, and 58 this year – one can see the trend of positive growth. Race organizers François Tolède, Luc Poupon, and Annelisa Gee, have worked carefully to ensure that the event expands carefully, seeking input from competitors. Gee said, “At the end of the day we talk to everyone. We appreciate constructive criticism that helps us grow the event. People have been very forthcoming; they really appreciate that we are not fixed in our ways. That’s the beauty of a new event -- we are completely open-minded to change."

Competitors enjoyed four days of racing in an extremely wide range of conditions, from five to 25 knots, on different courses, each of them highly tactical and spectacular. The Maxi class, which numbered nine boats, attempted in vain to chase George David’s Rambler 90, the winner of a second trophy after her success in 2010 (Rambler 100 won in 2011).

Each of the seven classes competing saw some bitter-fought, yet friendly struggles. The quality of the international crews many of them professionals from the America’s Cup, Olympics, and other grand-prix events meant that this event in St Barth had an excellent line-up, which included Bouwe Bekking (Nilaya), Scott Vogel, Shannon Falcone, Jerry Kirby (Rambler 90), Steve Benjamin and Dee Smith (Decision), Gavin Brady (Vesper), Cam Lewis (Paradox), Charlie McKee and Ross MacDonald (Mayhem), Tony Rey, Jeff Madrigali and Nacho Postigo (PowerPlay), as well as the French sailors Jean-Paul Mouren (Med Spirit), Lionel Péan and Jacques Vincent (Sojana). All the sailors enjoyed an amazing week of racing on the waters around St. Barth.

The event enjoys the continued support of watchmaker Richard Mille and sportswear brand Gaastra. Other event partners included leading St. Barth villa rental agencies WIMCO and Sibarth. Both companies offer a gorgeous portfolio of private villas for rent on St. Barth, and their sponsorships included presenting five Les Voiles class winners – Classic, Spinnaker I & II, Non-Spinnaker, and Multi-hull – with a complimentary week in one of their top villas, with their own concierge ready to attend to every request, a prize that provided significant motivation to skippers and crews.

While race organizers are extremely pleased at the continued success of the Les Voiles event, their team is already looking forward to the 2013 event. Said Francois Tolède, “The harbor in Gustavia cannot grow in size, and we shall soon be reaching the limit on number of yachts we can accommodate, around the 80 - 90 mark. Management will become an even greater issue and we want to maintain a stress-free, easy-going way of organizing things. We reach for a high-class event with a French touch!”