After a phenomenally successful 2012 that included winning the Kings Hundred Guinea Cup in Cowes, the 44-metre J-Class Lionheart started the new season with a splendid performance in the St Barths Bucket Regatta. The many years of research & development by Andre Hoek and his design team in the Netherlands and the construction expertise of Claasen Shipyards again paid dividends in St Barths: Lionheart came second overall in the special J-Class races category and took home the special 'Corinthian Cup' for best non-professional helmsman. 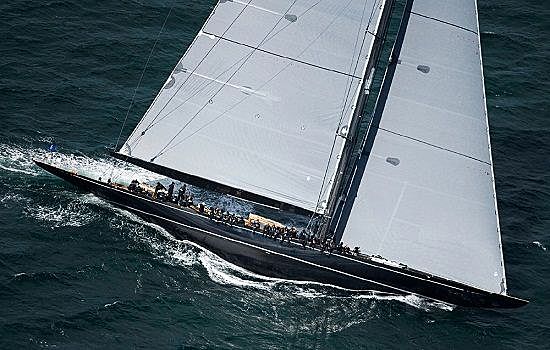 The St Barths Bucket is always a great way to inaugurate the new regatta season in the fabulous surroundings of the Caribbean, but the 2013 event will also be remembered as the first occasion that five J-class yachts squared up against each other. Velsheda, Ranger, Hanuman, Rainbow and Lionheart competed in four incredibly close races in varying conditions under the J-class Association handicap system.

The first day saw the giant sailing yachts go head-to-head in an upwind downwind race in approx. 15 knots of wind. It was a tight race from the outset as Lionheart and Hanuman roared ahead of the fleet. Lionheart was in pole position at the last upwind beat but on the last leg of the race Hanuman went extreme and gained due to a massive shift and took the honours on the final downwind lap.

On day two of the Bucket the wind had lessened to between seven and ten knots for the race around the island. Hoisting a massive code 0 on the first fetch gave Hanuman an immediate advantage as she was the only J to be carrying such a sail onboard. Hanuman took the gun with Lionheart second again.

Day three was in 25 knots of true wind with squalls and some pretty unpleasant rainy weather. Lionheart was in a luffing duel with Rainbow and over the line early, forcing her to jibe back and start again. Although she almost managed to catch up with the fleet Lionheart could not win any more on corrected time and had to settle for fourth spot.

Lionheart had saved the best for last on day four, which featured an extra J-class race around the island in 20 knots of breeze and some pretty heavy swells. She had a great first upwind beat coming back from third position to lead the fleet. Hanuman and Lionheart then jostled for pole position all the way to the finish in a very exciting race that saw Lionheart eventually take line honours just two seconds ahead.

All in all, St Barths Bucket 2013 was a thrilling race event featuring some of the world’s top sailors. Hanuman and Ranger had fully professional crews while about half the crew onboard Lionheart and Rainbow were amateurs. Ken Read was at the helm of Hanuman, Earl Williams helmed Ranger and Marc Neeleman took the wheel onboard Rainbow. Both Velsheda and Lionheart had their owners at the helm, and the latter was delighted to win the Corinthian King’s Cup.

All the Js had professional tacticians, including Bouwe Becking on Lionheart. “This was only the fourth regatta for the owner and he did remarkably well,” says Becking, who felt that the decision to have the J-class yachts sail fleet-style in their own group in the same regatta as the superyachts sailing pursuit-style worked perfectly. “It was great that we had our own start procession as it would not have worked any other way. The Js are much harder to manoeuvre so the emphasis on safety is good. It was a really incredible experience and we owe a great thanks to the Bucket Committee and the J-Class Association.”

Andre Hoek was also among the crew onboard Lionheart. “Races with the Js are by far the most competitive superyacht contests with a very good handicap system,” he comments. “These mighty vessels are very close to each other in racing terms and all finished within five minutes of each other on a two-and-a-half-hour race. I was delighted with Lionheart’s performance in coming second overall and we look forward to seeing more J-class yachts being built in the future.”

The next to be launched from Hoek Design’s boards will be J8, which is presently under construction. Meanwhile, four J-class yachts are gearing up to go bow to bow again at the upcoming Superyacht Cup in Palma this June.