Lloyd Werft Bremerhaven has unveiled its latest superyacht concept, DIVA, a 96.50-metre superyacht with six decks and a volume just shy of 3,000 GT. 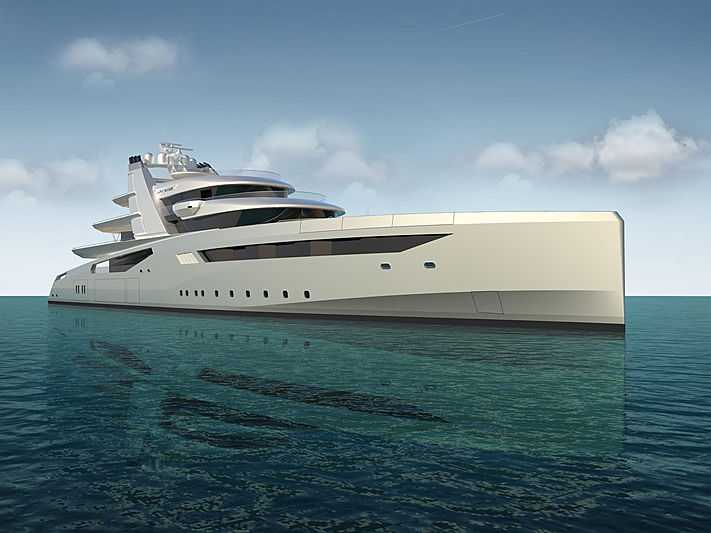 The German shipyard developed the concept together with designer Judel / Vrolijk, who drew up dynamic and sporty lines taking inspiration from race sailing yachts, with a vertical bow, a reverse sheer line and a sail-like mast. The interior has a look inspired by both Asia and Scandinavia in its clean design, but which still maintains a ‘feel-good factor’. Describing the concept as a whole, Torsten Conradi, managing partner at Judel / Vrolijk, comments that “DIVA has been developed with 40 years of experience in yacht design. The project implements some of the freshest and most unconventional features which will surprise and fascinate a lot of owners.”

On board, up to 10 guests can be accommodated across five staterooms, all of which are located on the main deck. Each stateroom comes with its own fold-out balcony. The owner has their own deck situated forward with two bedrooms, his-and-hers bathrooms and an office.

The owner’s deck has a bar located in its circular lounge and has two sunpads facing aft for stunning sea views.

The bridge deck features a fireplace, circled by a seating area for up to twelve guests for a campfire feeling. The sundeck has two lounges, one designed for al-fresco dining, the other designed with a more private ambience in mind.

Outside, the main deck shows off a large infinity pool. In addition, a 300-square-metre wellness and entertainment area covers the aft main deck and lower deck and two 18-square-metre shell doors create a beach-club feeling at open sea. Other notable onboard features include a spa area, and a helipad on the foredeck which can house a six-seater helicopter.

DIVA would be fuel-efficient and highly manoeuvrable, powered by four diesel-electric generators driving two propulsion pods. Her underwater hull form has been designed for both maximum comfort and seaworthiness, as well as extremely low noise and vibration levels for her onboard guests.