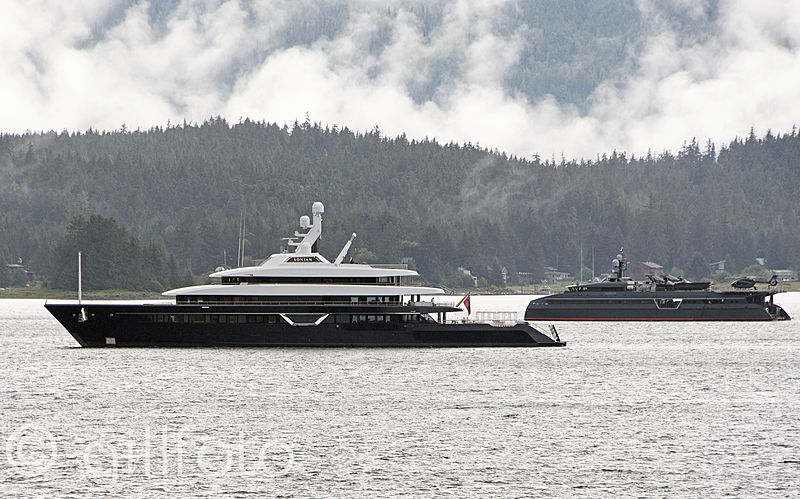 Photo: GillfotoCurrently exploring the US West Coast is the 87-metre Feadship Lonian and her support yacht Hodor, seen here together in the town of Juneau, Alaska. The cruising pair operates in tandem with the 66-metre multihull Hodor providing support to her mothership by carrying a fleet of customised tenders, toys and landing craft in addition to crew, staff and supplies that the pair need on their voyages.

Built by Feadship and launched in 2018, motor yacht Lonian is the design work of Sinot Yacht Architecture & Design and Richard Hallberg Interior Design. Some of her highlights on board include an extended aft deck beach club setup with a large pool along the centreline, an outdoor gym on the bridge deck aft as well as helicopter landing capabilities on the upper deck. Get a closer look on board Lonian here.

As support yacht to Lonian, Hodor, a 66-metre catamaran built in Spain at Astilleros Armon, was launched in 2019 to a design by Australian firm Incat Crowther. The design is based on successful offshore crew supply models based on the same multihull platform and heavily modified for the luxury yacht market without sacrificing any of its oceangoing capabilities. Hodor’s strength lies in its ability to safely carry a fleet of five tenders on its aft decks and to deal with helicopter operations without having to disrupt life on the mothership. A fully-certified helicopter landing pad with a D-value of 16m can accommodate helicopters up to 6t such as the popular EC145. The largest tender carried on board is a custom 17-metre (56 ft) chase boat with four high-performance Seven Marine outboard engines. Step on board Hodor here.