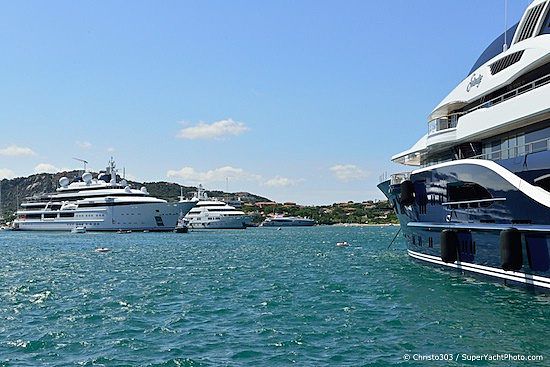 Spotted last August in Porto Cervo, Sardinia are three, large Lürssen superyachts; Katara, Saint Nicolas and Solandge. The Qatari-flagged 124.40 metre Katara was built in 2010 and impressively ranks as the 16th largest superyacht in the world. She boasts exterior designs by Espen Oeino and though it is known that Alberto Pinto was responsible for her interiors, little more information has been revealed.

The 70.2 metre Saint Nicolas was built in 2007, and is the second of three almost identical yachts ordered from one client (Titania and Martha Ann complete the trio). She features a highly detailed classic interior by Zuretti Interior Design.

Built in 2013, Solandge accommodates up to 12 guests and was delivered to a previous Lürssen client who upgraded from a 63 metre vessel.