Allen Leng, President of Chinese shipyard Heysea Yachts, is a man with big ambitions. “My vision for the next decade is for Heysea to be one of the world’s top 10 shipyards in the 40 to 60-metre sector,” he says. If the shipyard’s performance over the past decade is anything to go by, this ambition is one that should be taken seriously by the superyacht industry. Celebrating its tenth year in business in 2017, the yard says it is responsible for the largest number of yachts 60’ and over in mainland China – numbering more than 100 – and has 10 projects currently under construction, ranging from 58’ all the way up to a custom 43-metre catamaran.

Heysea Yachts was founded in 2007, a notoriously testing time for even long standing operations let alone new ones thanks to the Financial Crisis, after Leng and his colleagues identified a gap in the market for Chinese white boat construction. Having studied naval architecture and engineering Leng had encountered commercial ships but had very little to do with yachts and it was only when he spent time living and studying in New Zealand, a country where time on the water is a way of life, that he was first properly exposed to the world of leisure yachting. On his return to China he was determined to create a company that would be able to foster the same love for sailing in China as he had seen first hand in New Zealand. “I came back and I said ‘we need a Chinese brand for sailing and power yachts’,” he remembers. “These yachts represented an artistry of building and of course the engineering side was interesting for me too.”

And so Heysea Yachts was born, with a vision to create a market-leading shipyard and to help bring the world of yachting to China. Initially focusing on the 60 to 80’ market Leng himself worked on the development of the naval architecture, exterior and interior design of the Heysea range, a process he still enjoys today. Originally the business plan had been to target the worldwide market from the get go but with the onset of the Financial Crisis, focus shifted more to the local market, a move which proved incredibly beneficial in the long run as the yard fast proved popular within China. 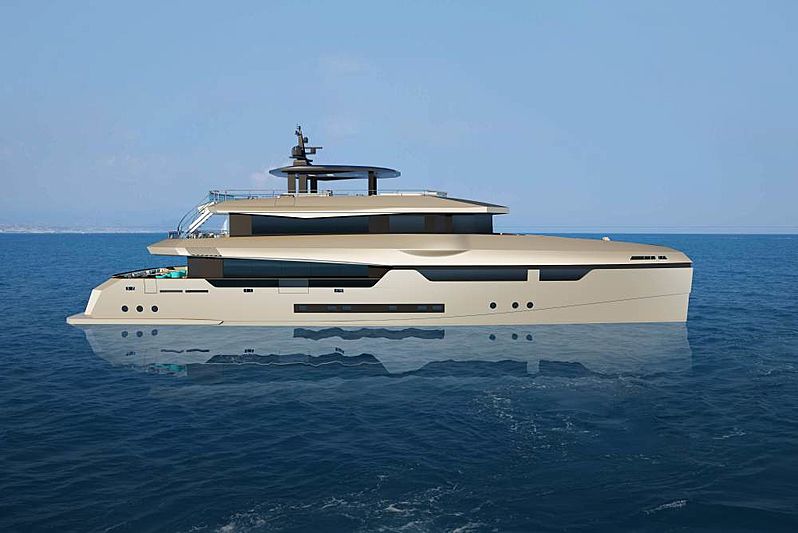 Today the yard employs nearly 400 staff, working out of its 66,700 sqm facility with almost all work done in house bar the outsourcing of steel and some key products that the yard prefers to use proven European brands for. Four lines are on offer – the Heysea series (Heysea 60, 70, 78 and 82 models), Zoom series (Zoom 58, 76 and Zoom Plus models), superyachts (Asteria 96 and 108 and SeaLink 46.8M) and custom projects. With every build the yard looks to counter some existing preconceptions that Chinese construction does not always equate to the highest quality, taking real pride in the skill and craftsmanship of the yard team. Building mostly in composite, the yard is now branching out to also build steel hulls with composite superstructures, and is also open to discussing other build materials for custom projects.

Currently most of Heysea’s clients are from Asia, particularly China, Hong Kong, Philippines and eastern Asia in general. As a Chinese yard, run by an experienced management team, Leng believes that they have a better understanding of what Chinese clients want than other yards in the industry and that this has played an important part in their ongoing success. “Chinese owners use their yachts very differently and we understand what they want,” he says frankly. “For example usually Chinese owners don’t like living in the boat at night, they just use it in the day, going out cruising and having fun before returning to the marina, so the communal onboard spaces on Chinese owned yachts are very important, more so than the accommodation.”

It was client demand that quickly pushed Heysea Yachts into the superyacht sector with customers seeking bigger and bigger yachts while wanting to stay loyal to the brand. “As an example, we have a client who bought a 60’ boat from us and after only three months he told me, ‘Allen I need a much bigger yacht, 60’ is too small.’ No problem. He then bought an 82’ yacht,” says Leng. “Two years later he called me and asked to buy one of our 108 models and sold his 82’, so we signed another contract.” Reflective of this client demand for bigger yachts, the yard’s Asteria 108 model has proved particularly popular with eight units sold to date including two sales in the first quarter of 2017 alone. 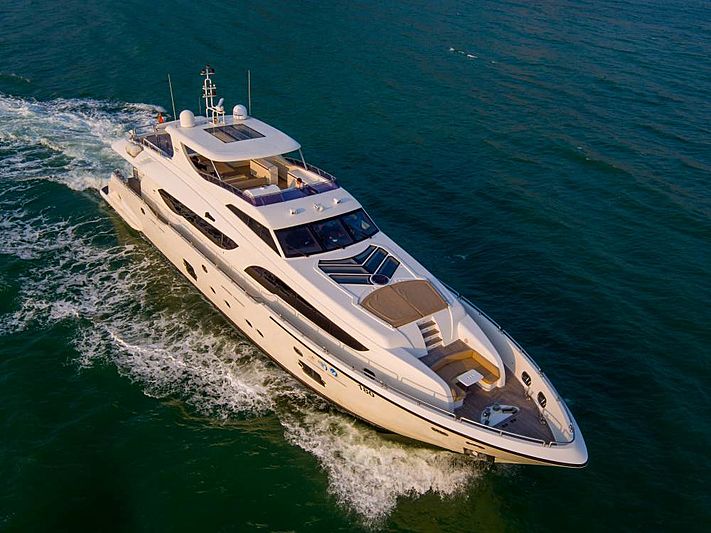 For Leng there is a notable difference in the way Chinese buyers advance through ownership when compared to the Western market. “I have found in the Western world that owners have smaller yachts first, starting around the 20 to 40’ mark, and then upgrade, but in China now they are starting much bigger, at 60 to 80’, and skipping the smaller stages.” This swift progression up in yacht size is one of the key reasons that the yard management team has identified the 40 to 60-metre bracket as their main focus for growth in the years ahead. “The 40 to 60-metre sector will be our main range, and we are developing new models with European designers which will increase our offering,” says Leng. “Of course we will also offer total customisation for clients who want something unique to them as well.”

The perfect example of a custom solution for clients is the 43-metre catamaran Vista currently in build. “It’s a really beautiful yacht,” says Leng. “Our client had been looking around the world at various shipyards and whether they could cater to the level of customisation he was after but the European yards were too expensive for him as they were offering 100 per cent customisation and that costs money,” says Leng. “We totally designed the yacht according to what he wanted – we gave him a solution – and he said ‘wow you can do this?’ and committed to the build.” Two years on, the yard is hard at work on the project with one year until delivery due to some additional changes the client wanted to make during the construction process. “It’s a really beautiful yacht, I can’t wait for the industry to see it,” says Leng proudly.

The yard adds new designs to its range every year, in order to keep its offering fresh, with the wide range of projects that are currently in build reflective of the different demands of their client base. 10 new builds are under construction at the time of writing including 58’, 76’, 78’, 96’, 108' and 115’ motoryachts, the 43-metre custom catamaran and an 82’ sailing yacht. Sailing yachts are on Leng’s radar for future development, believing that the sailing sector in China is set to grow in the years to come. “Sailing boats are growing in popularity in China, they are a good way for clients to enjoy them, especially when you can enjoy racing them in good company or with a team,” he says. “We expect to sell more sailing yachts in the coming years, but only in the bigger sizes of 60’ and over.” 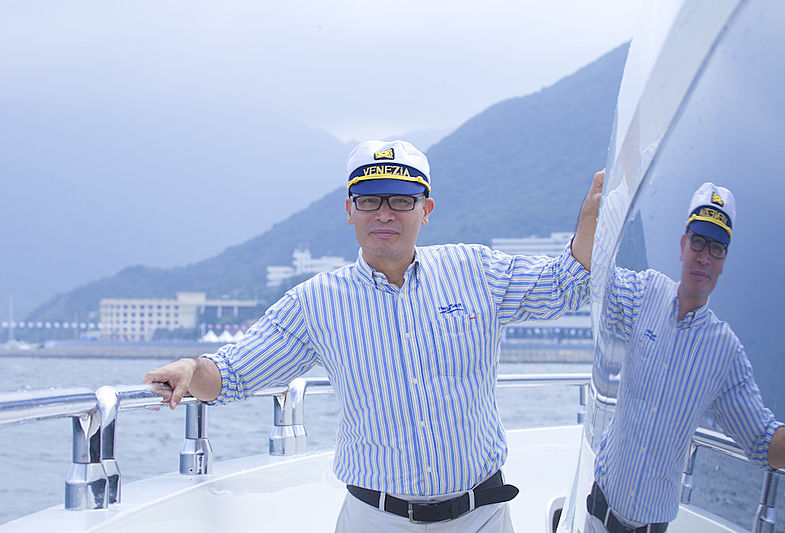 “I see lots of opportunities for the Middle East and other locations,” says Leng, in explanation of the yard’s presence as an exhibitor at the Dubai International Boat Show. “Our current clients tell us ‘your design is very beautiful and of course your price is good’ so we know we can be competitive in the Middle Eastern market, and next year we will come back to the Dubai show and keep building our presence here.” The ongoing development of their range is part of this global expansion strategy with results already showing. “We are currently building the first of our Heysea 115 line, which we designed to be targeted at the North American market.” The recent addition of a US representative to the Heysea team is testament to the yard’s long term commitment to this market. With so many exciting developments underway at the yard, there is no doubt that the coming decade will hold exciting things for Leng and the team at Heysea Yachts.

This article was featured in a recent edition of the SuperYacht Times newspaper.Subscribe now to receive your copy straight to your door and never miss another issue.