We take a look at the latest magazines, books and other yacht publications. This month includes; Yachts International, Yachts France, Boat International, The Superports, Boote Exclusiv, The Yacht Report & The Crew Report. 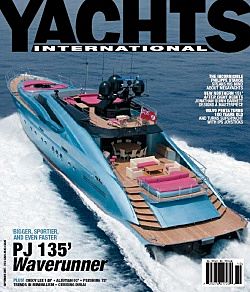 The September issue of Yachts International (photo) features the spectacular Palmer Johnson 135 Waverunner. Other yacht features include Cheoy Lee’s Marco Polo, Northern Marine’s After Eight, the Aleutian 92 and the Pershing 72. Further more there are articles on cruising in Dubai, trends in minimalism and the famous French designer Philippe Starck speaks his mind about megayachts.

The French sister publication of Yachts Int, Yachts France has also a feature on Waverunner in their July issue. Also an article on Lürssen’s Kismet, Alloy’s Como and the Tecnomar 90 Velvet. And last but not least they have a feature on the top 100 of largest yachts in the world with some stunning photos.

Boat International shows the completely rebuild R/S Eden (formerly Fulmara) on the cover of the August issue. The article on R/S Eden covers every detail of her restoration. New yachts featured include Perini’s Rosehearty and Alloy’s Como. In the charter section articles on Twizzle (written by her owner) and Seafaris and off course all the latest charter yachts. Also included with the August issue is the Superports, the yearly superyacht marina guide.

Issue 86 of The Yacht Report has articles on Feadship’s Space and the new support vessel of the J Class Velsheda, the 43m JFA build Bystander. Other interesting articles include an update on the Dutch superyacht industry and a detailed report on April Fool’s special awning.

In the “passport to” series of The Crew Report this time a passport to the Cote d’Azur. Also in issue 13 articles on the Superyacht Cup, the Croatian coast and a construction update on Burger’s project #509.