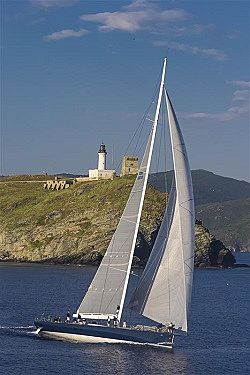 The 61st Giraglia Rolex Cup will live long in the memory. 184 yachts from 14 countries took part in a gripping contest that provided constant tactical challenges for the international fleet.

Completing the 243-nm course from Saint-Tropez, France to Genoa, Italy in 31 hours, 35 minutes and 48 seconds, Owen-Jones’s recent launch saw off spirited competition from the seven-strong fleet of Mini Maxis to claim line honours. In the process, Owen-Jones avenged the disappointment of another dramatic finish. At the 2005 Giraglia Rolex Cup, his former Magic Carpet narrowly lost to North Sails Sportswear having led with 300 metres to spare and the finish line in sight.

“We didn’t do anything radical,” explained Owen-Jones on arrival at the Yacht Club Italiano in Genoa, “we knew which side of the course we wanted to be on. As the first boat we had to cover all our bets. We stayed pretty central and that played out well.” Magic Carpet 3’s stubborn tactical approach forced the chasing Mini Maxis to gamble in the search for stronger breeze on the last leg from the Giragia rock. While one group – including Bella Mente (USA) and Stig (ITA) – sailed right of the rhumb line, Rán 2 (GBR) and Alegre (GBR) shifted left, a calculation which almost paid off. Niklas Zennström’s Rán 2 finished just four minutes shy of Magic Carpet 3 with Andres Soriano’s new Alegre arriving a mere two minutes later. Five boats arrived within 30 minutes of the leader, a demonstration of the tight competition at the front of the fleet.

Magic Carpet 3 and Alizée were rewarded for their efforts with Rolex timepieces and Alizée the Giraglia Rolex Cup Trophy at the final prizegiving at the Yacht Club Italiano in Genoa held on Friday evening.