Thursday saw another magnificent day's racing for the Js. Race 2 got underway on the wind towards Lymington against the last of the flood tide in a 15 knot Westerly breeze. Ranger and Velsheda approached the leeward end of the line early and Ranger found herself trapped between the inner distance mark and the committee boat. Velsheda had to restart after being two seconds early for the gun. Lionheart and Rainbow made clean starts but Lionheart flew a protest flag after being fouled by Ranger, who was clearing the line on port. 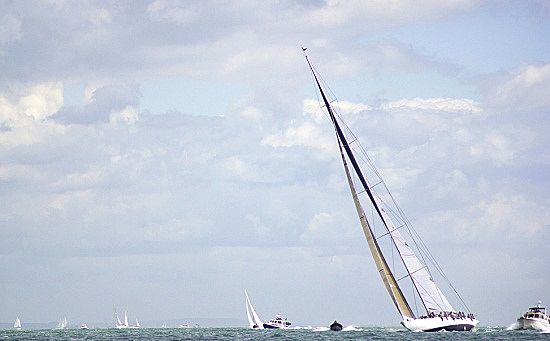 The long beat on the last of the flood tide to Solent Bank typified racing in the western Solent. Lionheart led followed by Rainbow, Velsheda and Ranger. Places did not change on the run back to Elephant. 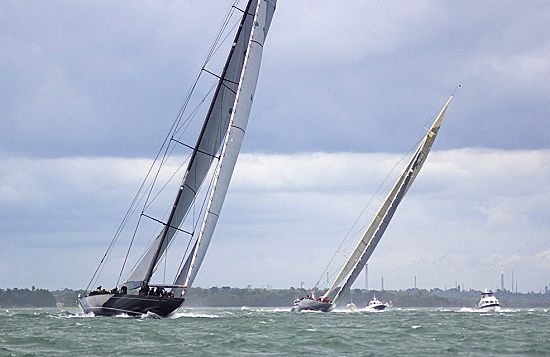 The breeze freshened as the yachts headed West again, this time to Lymington Bank mark where Lionheart consolidated her lead, putting a loose cover on the fleet. Here the tail-enders closed on the leaders with the strong Westerly tide. The leader, Lionheart, did a gybe set and headed back to the mainland shore to find the shallow waters, and Rainbow and Velsheda followed. 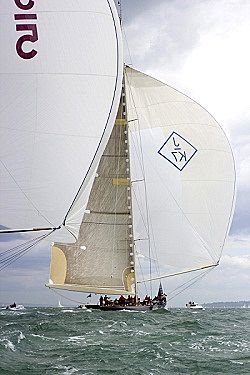 With little to lose and some distance behind, Ranger headed for the island shore. While this is the shortest distance back to Gurnard for the finish, the three yachts on the mainland shore gained from the significantly weaker tide.

The finish saw Lionheart take the gun, followed by Velsheda, Rainbow, and Ranger. However, Velsheda won the race by just 5 seconds with a small handicap advantage; amazingly close racing for such big boats over such a long distance.

A huge fleet of spectator boats followed the race and they witnessed some of the most fantastic racing seen in the Solent since the 1930s. Friday promises more spectacular racing; It is the final day of the Solent series and any boat can win the regatta on this race - Lionheart, Ranger, and Velsheda simply need first place to win the regatta, while Rainbow needs first place as well as a third or fourth-placed finish for Lionheart.

The Js race for the Hundred Guinea Cup on Saturday. The intention has always been to set the course East around the island on Saturday but this will be dependent on weather conditions.

We expect even more spectators today and Saturday, where the fleet of race marshals will need to work hard to prevent the spectator boats from interfering with the racing. A full race commentary is available on VHF channel 06.