Gulf Craft will debut its newest superyacht model, at the Kuwait Yacht Show, which kicked off today and runs until 7 February. The Majesty 122 is a the brand new addition to Gulf Craft’s Majesty Yachts line of luxury fly-bridge motor yachts. 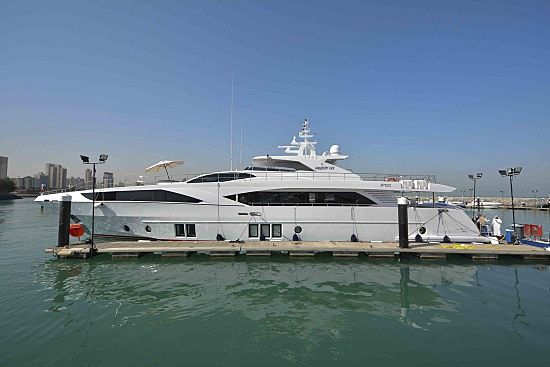 “Kuwait has a strong historical and cultural connection with the seafaring lifestyle, making the Kuwait Yacht Show a natural choice for Gulf Craft to first present our latest superyacht, the Majesty 122,” said Mohammed Hussein Al Shaali, Chairman and Founder of Gulf Craft.

“Standing as the largest superyacht to ever enter the Kuwaiti market, the Majesty 122 incorporates alluring features, such as an extended balcony and unrivalled on-deck lounging and entertaining areas, which will truly appeal to our Kuwaiti customers.”

The Majesty 122 is a raised pilothouse superyacht, created with a Mediterranean lifestyle in mind. The 122 features ample outdoor as well as indoor space.

The Kuwait Yacht Show, which runs from February 3 to February 7, is the third edition of the annual event, with the 2014 show being three times bigger than in 2013, according to the show organizers, having attracted more than 15,000 visitors.