In a year that will be remembered as a challenging one in all spheres of business, not least of all the yachting industry, the news that superyacht broker Burgess has sold Maltese Falcon, the world's largest sailing yacht, strikes an upbeat note. With an impressive sales track record of iconic yachts such as the 162m Platinum (now Dubai), the 95m Al Mirqab (now Indian Empress), the 90m Air (now Ice) and Adnan Khashoggi's Nabila (now Kingdom 5KR) already under its belt, the sale of the 88m Falcon represents another milestone for Burgess. 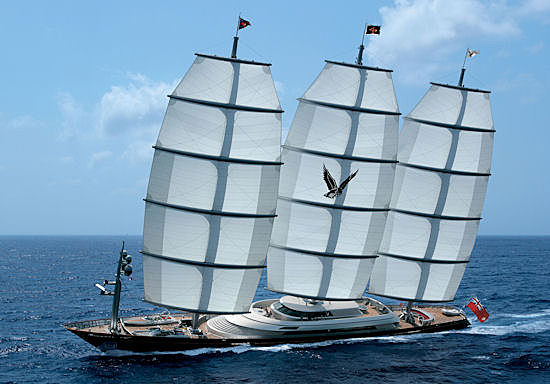 One of the most iconic of all yachts, and certainly the most photographed in modern times, this revolutionary yacht is famed for her sophisticated automated square rigged DynaRig sail plan. Three towering free-standing rotating carbon-fibre masts hold 25,800 sq. ft. of canvas on 15 square sails delivering exceptional performance, speed and manoeuvrability.

The brainchild of commissioning owner Tom Perkins, the Falcon was launched in 2006 and is the result of a collaboration between the world renowned Perini Navi, Dijkstra & Partners and Ken Freivokh. Burgess have long enjoyed a close working relationship with Tom Perkins and, according to Burgess CEO Jonathan Beckett, the sale was concluded following a one year process for close to the asking price, with Burgess representing both buyer and seller. Perini Navi USA were Joint Central Agents in the transaction.

The new owner was not merely attracted to the Falcon's cutting edge technology in its own right, but to the yacht's "green" credentials that result from an ease of operational functionality, rendering her one of the most environmentally advanced superyachts afloat today.

According to specialist sailing yacht broker at Burgess, Henry Craven-Smith, the Falcon's innovative rig is so ingenious in both practical and maintenance terms that during the 72,000 nautical miles she has covered to date, 55-60% of the time has been under sail, often at 20 knots - and with a top speed of 24.9 knots. The combination of fast cruising capabilities with little reliance on engine power equips the Falcon not only as an efficient "sailing machine" but as a true long distance passage maker, with an impressively low carbon footprint.

Creative flair combined with pioneering innovation are driving forces behind the philosophy and business ethos of the new owner. "Aesthetics, technology and sustainability were all very key factors for the buyer and Maltese Falcon ticked all the boxes", explains Jonathan Beckett. The Falcon torch has now been passed to the new owner, who is proud to be entrusted with the legacy of Tom Perkins' remarkable achievement and applauds his vision and the energy of the team who created the vessel.

Maltese Falcon will remain in charter under her new ownership, with both charter management and full operational management handled by Burgess.