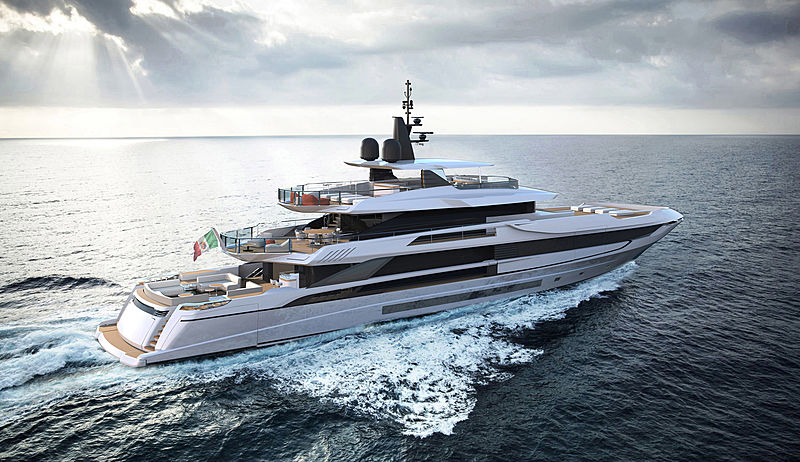 Photo: Overmarine GroupMangusta’s commercial director Francesco Frediani comments that “this year, two yachts were immediately chosen by an owner simply based on their project: first the Mangusta GranSport 33, which was presented in February and sold shortly afterwards, now the Mangusta Oceano 50, chosen by her owner-to-be just a few months after her official presentation.”

The Mangusta Oceano 50 is very much an in-house project, with Overmarine’s teams devising the naval architecture, interior and exterior design, with the latter happening in collaboration with the Monaco-based designer Alberto Mancini.

Mangusta’s Oceano 50 model is versatile in terms of layout and can include up to six staterooms depending on the owner’s wishes. Up to 11 crew sleeping in six cabins can attend to guests’ every need on board the yacht.

The exterior spaces on board the Oceano 50 are expansive, starting with the aft cockpit, which features sofas formed in a square, protected by a teak shell. The yacht comes with a sizeable, fully-equipped beach club and with a wide cockpit found just above the garage, which has been moved forward. When free of tenders, the garage can be turned into a counter-current swimming pool, and a Jacuzzi on the sundeck creates an ideal relaxation space. Also on this sundeck is al-fresco dining area for 12 protected from the elements by a full-beam hard top.

Photo: Overmarine GroupThe yacht’s twin MTU 12V 2000 M86 engines allow for a cruising speed of 11 knots, with a range of 4,000 nautical miles at this speed, while the vessel’s top speed is 16 knots.