Manson Anchors launched the Manson Boss Anchor at METS 2011. The Manson Boss anchor is the most technically advanced and safest anchor to hit the recreational boating market. It boasts even faster setting and even higher holding power. 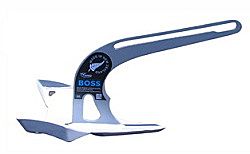 The Manson Boss was specifically designed to suit power boats in the 20'-100'ft range and boasts an average of 20-25% more holding power than other next generation anchors.

As the Boss only has one long slot in it, a key feature is the new patented Shackle Preventor. The Preventor changes the slot from a general short slot usage into a sliding slot to assist retrieval in foul seabeds. The Preventor is very quick and easy to operate and remains on the shank all the time.

The anchor's shank has also been FEA optimised for strength and efficient weight distribution. It is also made from the same certified 800mpa high tensile steel as the Manson Supreme. The Boss's shank clearance has been streamlined for access into tight pulpits on motorboats.

The Manson Boss is 100% New Zealand made, like all Manson Anchors' range. The anchor's intellectual property is secured by being copyright protected and is patent protected. The Manson Boss will be available in store around April/May 2012.