“In this business, you get a lot of people who wear different shirts over the course of their career and change the direction they go in. I may have changed the colour of mine over the years, but it’s always been the same brand, the same person under the skin.” 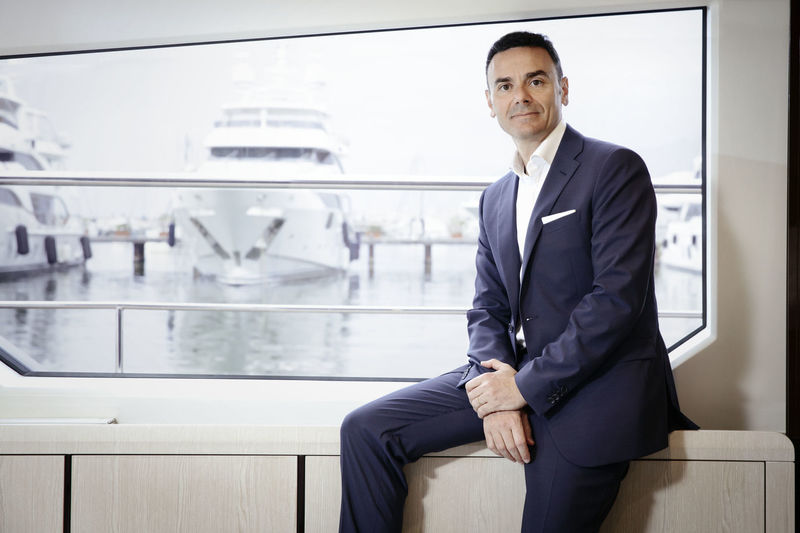 So says Marco Valle, the ebullient Italian Managing Director of Azimut Yachts. Appointed to his current role back in 2016, Valle has been part of the Azimut Benetti Group family since 1996, joining Azimut’s sales department armed with an American MBA and steadily progressing through the ranks up to Commercial Director Worldwide: a position he held until the end of August 2016. During his lengthy tenure at the company, Valle has seen the Italian builder endure some tough times, including the financial crisis where the production of yachts between 27-38 metres dropped from 18 vessels in 2008 to just six vessels in 2009, a decrease of 66.6%, but has stayed long enough to see them resurface as the Azimut we know today.

With the recent introduction of several new models around and over the 30-metre mark, including the Azimut Grande 30, 32, 35 and the most recent and largest model from the builder, the upcoming Azimut Grande Trideck. Azimut is looking to gain substantial ground in the 30-metre plus superyacht market. Notably too, last year the combined number of Azimut yachts between 27 and 38 metres in build and in operation was 19, finally exceeding the builder’s peak production level from before the crash. Indeed, when the outspoken Valle weighs up the pros and cons, as he sees it, the global financial crisis was the best thing that could have happened to both Azimut Yachts and the superyacht industry as a whole. SuperYacht Times takes some time with Valle to unpick the reasoning behind this assertion and to discover the meaning of true staying power. 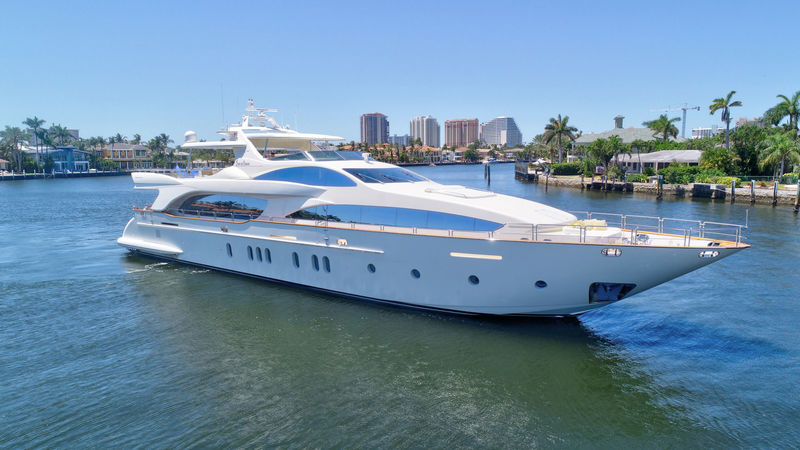 First off, what makes Azimut Yachts so special that you decided to stay for so long? You must have been approached by other companies over the years.

The reply to this is very easy. If you want to change the direction in which you are going, you want to change for something better that will give you more for your career. At that time, there were no other companies either as large or as innovative as Azimut. The only other was probably the Ferretti Group, but Ferretti was changing ownership at the time and they had also some financial issues, so it was not a company I wanted to be involved with at all.

In order to get more experience and to learn more, another solution might have been to change industries but I didn’t want to do that. People who are coming from other manufacturers to Azimut are realising how advanced we are compared to the rest: the nautical business is very artisan. There is a pretence of it being sophisticated but the reality is everything is very artisan. Among this crowd, Azimut is the one with much more advanced technology, industrialisation and with a wide range of boats from 34 feet up to 35 metres built across different sites. With boats of different sizes, you have to approach the build process differently; and a larger portfolio makes you feel like you’re working in different companies. 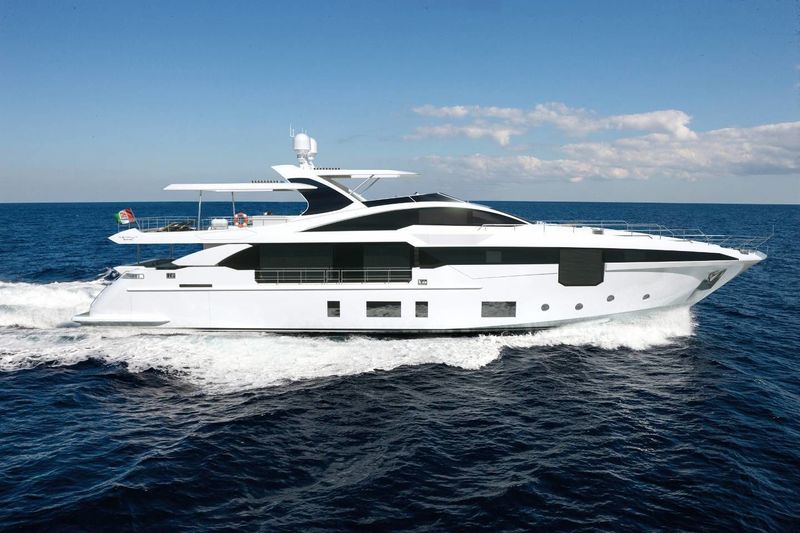 During your 23-year journey at Azimut Yachts so far you have had many different sales positions. Now you are Managing Director, do you still remain active in sales?

In this kind of market, there is very direct contact between people’s work, even in the top management and this is vital in order to succeed. The companies that are doing well in this industry have CEOs and top management who are at the boat shows and are sitting on boats with the clients, so if they call me here, I am going to be at hand. I was involved directly with the sale of the two Azimut Grande Tridecks. 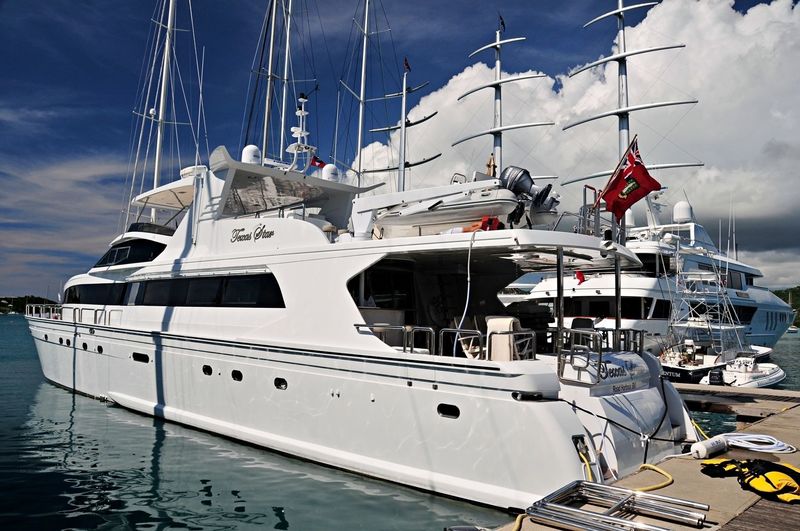 Photo: Benoit DonneTalk me through what happened with Azimut Yachts and the global financial crisis.

You know what? The best thing that happened in this industry was the crisis because it was too easy in the past. Everybody was building boats without putting any kind of effort to find innovative solutions, to reduce costs or even just to try to be more efficient. They were selling just because they could.

After the crisis, things changed. The products now are more efficient, cost less, the market price is lower and they have more contents inside and thus more real value than before. Of course, the crisis was a very difficult time: the market dropped around 40% and similarly we did too, but now we are growing every year and delivering quite a number of boats. 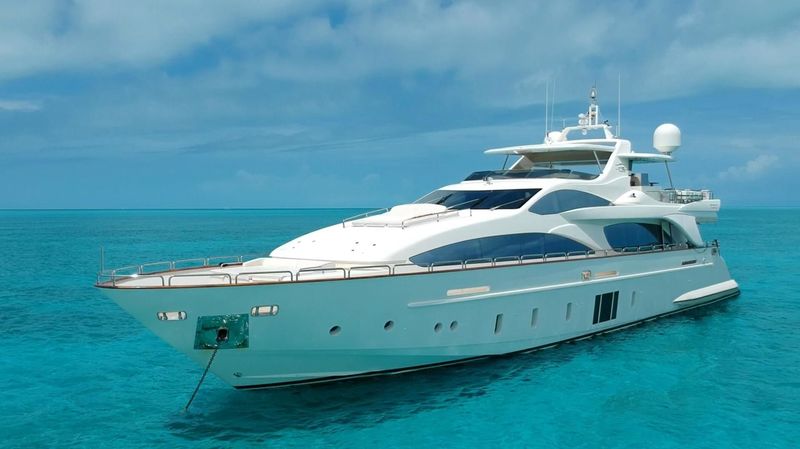 Photo: Denison Yacht Sales
There is still some fear in the industry about the possibility of another crash. If you look at the market now, from your side, do you think another crash is going to happen?

I hope that there will not be another crisis. There will probably be a kind of slowing down which is totally normal. The point is, in each market, in every industry, you experience such a slowdown and it doesn’t mean that you sell less. It depends on what kind of product you are selling and whether you have the kind of capabilities to produce something that people want.

I always say to our salespeople: if the market is going to be reduced, it doesn’t mean that you’re going to reduce your market share proportion. Let me give you some numbers: the Azimut Grande 27-metre was launched in 2017, so it’s been 18 months and we have sold 26 units. Nobody would have believed it before. 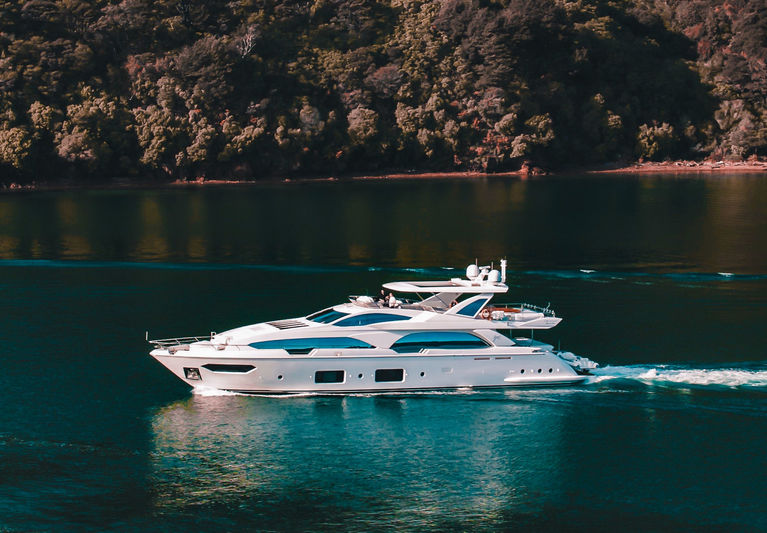 Photo: Tobias TulliusIn terms of the product range of your models, you go from 34 feet up to 38 metres at Azimut which obviously appeals to quite different markets. Is it difficult for you to focus on all of these different markets? 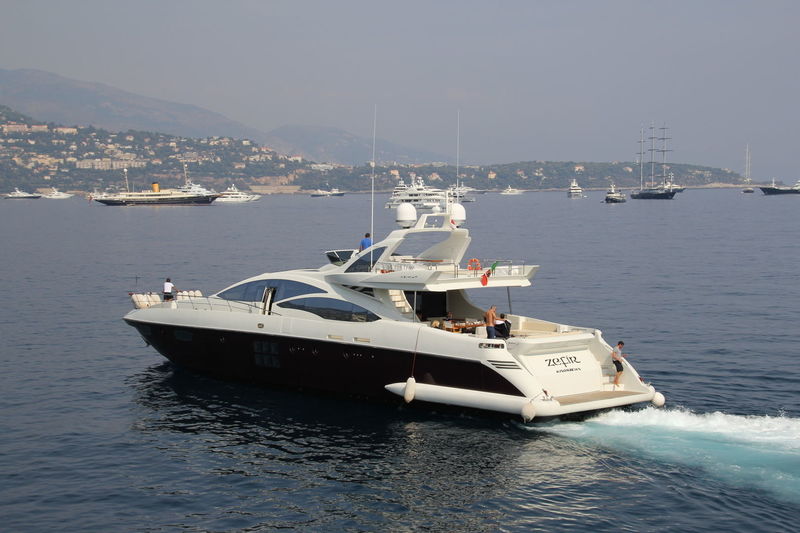 Photo: Merijn de Waard / SuperYacht TimesYou have recently unveiled a few new models, including the Azimut Grande 25 Magellano and the Azimut Grande S10. How involved are you personally in product development?

I am very involved in this, we all are. We don’t operate with a top-down hierarchy and we organise things by committee: we might get input from the market, it might come from the designer, come from the ownership, the technical side and so on. At the same time, this means we are able to create something newer on the market. It is the reason why the committee is so large because everybody can put in their comments but, at the same time, nobody has the final world. 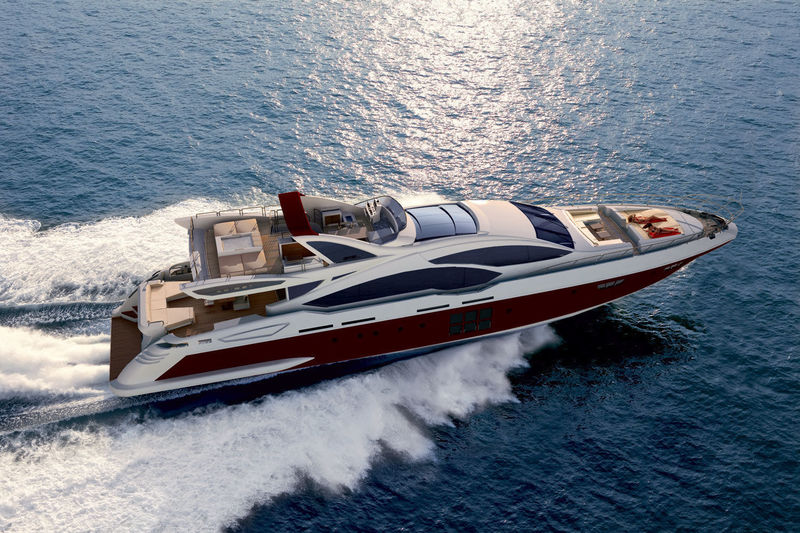 One of your most recent models, the Azimut S10 which was disclosed at last year’s Cannes Yachting Festival and will launched to the market next September is a new collaboration with Alberto Mancini. Who do you see as potential clients for this going forward?

This will definitely be part of a niche market: this means that there will be fewer people buying it, but it is much more of a ‘show off’ boat.’ It is for people who want to identify themselves with style and design in different ways. It looks like a sport boat but it’s not one of those fast, fast boats. Even Pershing don’t do these any more because of fuel consumption and the green factor, everyone has sustainability in mind, so it’s more of a design feature.

In terms of speed, the S10 is going to reach around 34-5 knots and people are satisfied with this. We have clients who use our 77S at 22 knots even though it can reach 35. These boats have a sporty and ‘I can go there’ feel about them and they are selling well in both Europe and Asia. With the S10, having a new designer involved was something new for people to talk about. 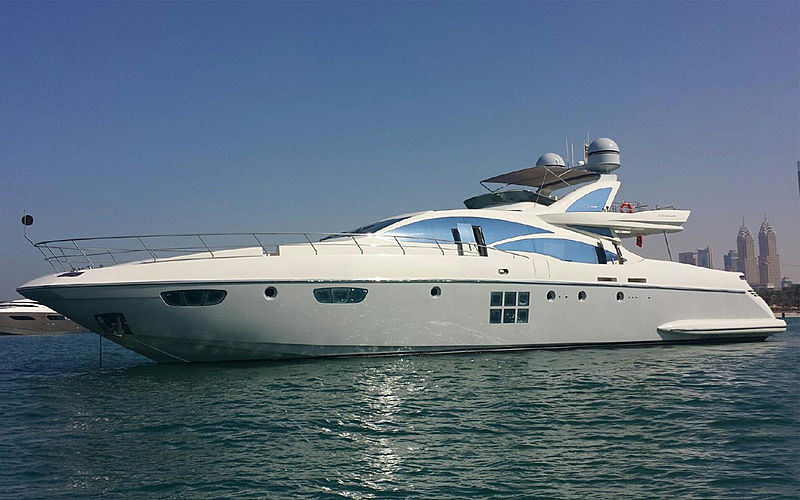 Photo: Ocean IndependenceWhere do you see the most innovation right now in the industry? Is it in the design, the technical side of the projects or the change in lifestyle expectations?

I think it’s a real mixture. A few years ago we decided to have a big think and we created products based on what our dealers and our clients wanted. But the problem is that if you’re going to build a boat it takes one to two years. The moment you launch a product that was perfect to both clients and salesmen, it’s the wrong one: it’s already old as they are thinking about what they want from that boat at the present time and not thinking about what will be needed in the future.

Because of this, we realised that we had to create products that kept their sense of novelty. Azimut has always had novelty as part of our heritage: we were the first to introduce windows on the hulls of our boats, we had the first use of carbon fibre and all of this gives so much more value to the products we sell. 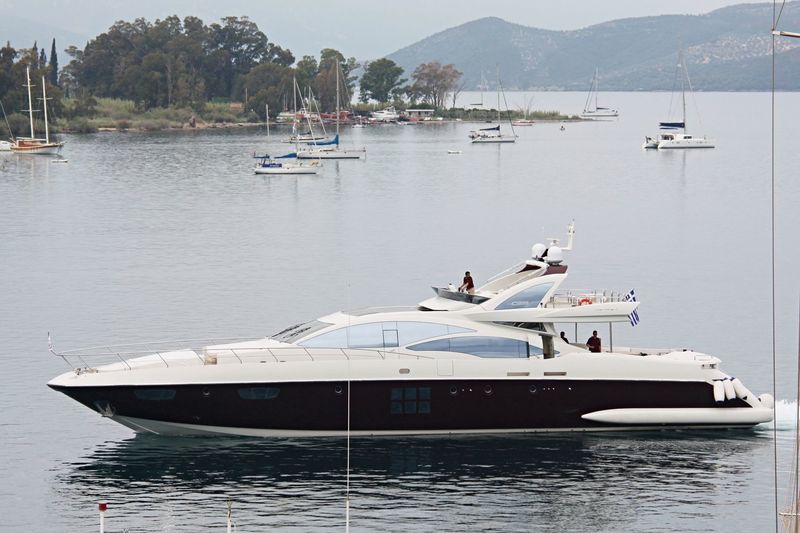 Photo: Merijn de Waard / SuperYacht TimesWhere would you say the strongest markets are for Azimut and where do you see the strongest growth happening?

Everywhere is good for us. We are definitely growing and with our bigger boats as well, although we always complain that we can do more. Russia is certainly very strong for us, as is the Middle East. For boats above 25 metres over the last two years, everybody was up I guess. We also have a good network in Asia. We do not send boats over there directly but once a boat is sold we send it over there and at the moment we are seeing great results from this. Last year, we sold a 27-metre boat in China and we have a couple of 32s in Asia and Indonesia as well. In South East Asia, we have delivered some big boats, more big boats than smaller ones, we have a couple in Asia and a couple in Japan. 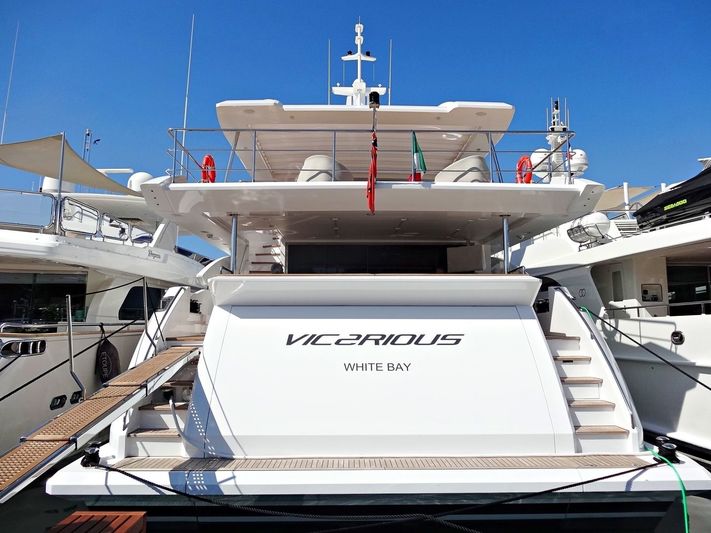 Photo: Aurélien Herman / SuperYacht TimesFinally, are there any plans to go bigger with Azimut Yachts and to build boats above 40 metres? Can we expect to see a displacement or a full displacement Azimut on the water in the years to come?

No, no, three times no! It will never happen. No steel, no aluminium, nothing connected to displacement at all. This cannot be credible for us because, in the end, Azimut is recognised in the segment we are in, so we are going to stay within this segment and keep on growing - I am excited to see what the future holds. 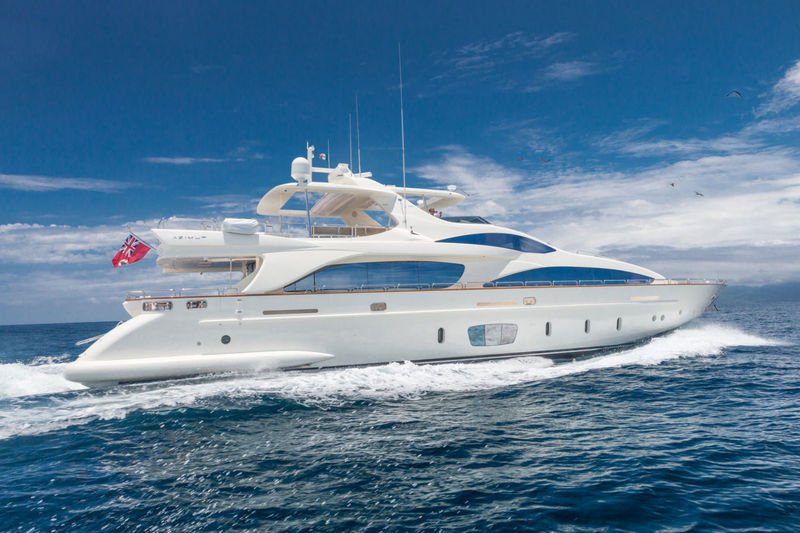