He is more than accomplished on board a sailing superyacht, so there are few surprises left for Marcus Blackmore when it comes to competing in one of the many regattas around the world. What thrills him now are the encounters with planet Earth which he and his wife, Caroline Furlong, get to experience on board their 24.72-metre Ammonite - the modern sloop and hull number three in the SW82 series built by Southern Wind, which has since been sold and is soon to be replaced by Marcus’ latest purchase: the new and in-build SW96. Having done his homework, Marcus was introduced to Southern Wind during a boat show. “I first looked at a smaller Southern Wind boat and had a broker show me around. Then, when I found I had reason to be in South Africa, I visited the factory and bought the 82. It was a good experience! Southern Wind were very generous with their time,” he explains. Now spending six to eight weeks a year on board Ammonite since taking delivery in 2016, Marcus recalls how the additional investments he made during the build certainly paid off. “I wanted to put on a party for all those at the shipyard who were building my boat. So I had a friend with a vineyard and gifted everyone some wine and laid on some good-quality food. I wanted the team to know that quality was important to me and that they were helping us to realise our dream. I remember one guy in particular who was responsible for all things electrical, he said to me that no owner had done an event like this before and he would make sure that the electrical systems on board would never fail me… and still to this day they haven’t! The simple things in life make a difference, especially when you recognise people.”

Marcus and Caroline visited the Southern Wind shipyard and the Nauta Yacht Design studio in Milan during the build to help steer the design to suit their needs. Aside from wanting Ammonite to be for both business and pleasure, the couple requested that the designers create a certain ‘wow-factor’ for them. “They didn’t tell me what they had done, so when we took possession of the boat we went downstairs and the coffee table had a beautiful hand-crafted scrabble table on top, because Caroline loves to play scrabble - it’s her thing - but not with me - she always beats me, and I like winning. ” 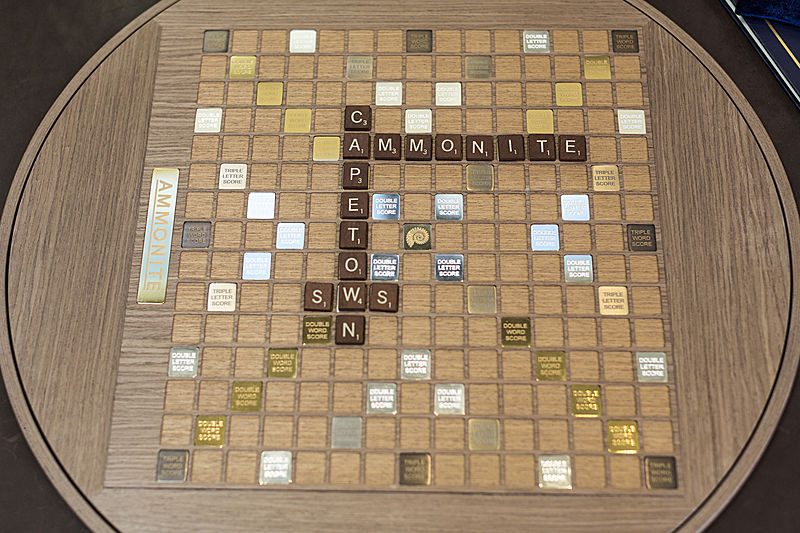 Photo: Carlo Borlenghi“Ammonite is a good boat to take part in superyacht regattas with, but she is also a very good cruiser. I think she is the first Southern Wind that doesn’t have a full teak deck. None of my race boats have teak decks as my crew shouldn’t spend their lives cleaning teak decks - plus we saved 350kg!” These considerations to the design of Ammonite, the custom lifting-keel included, derive from Marcus’ lifetime on the water. “I’ve always had a love of the water. Even when I was in the army during the Vietnam War I was on the Australian landing strip. I’ve also been on the National Marine Safety Committee and the board of the Waterways Authority,” he recalls.

Touching on the most prominent moments of his time on the water, and despite his mellow attitude towards his achievements, Marcus has competed in a multitude of renowned yacht races, including the Sydney Hobart Race, Hamilton Island Race Week, the Admiral’s Cup and the Australian Farr 40 where he stayed at the top of the leaderboard between 2000 and 2007. “When I started out racing, I spent most of my time on the grinders. One day, I asked Peter Green, my friend who taught me ocean racing, how do I get down the back? You guys seem to be having more fun than me! And he said I needed to buy a boat. So I went and bought a boat and I have been down the back ever since,” Marcus explains. “I’ve done 12 Hobart races but that is not the sort of sailing I want to do anymore - the Hobarts are a roll of the dice, and where you finish depends on what sort of weather you get, the length of your boat and if you manage to get to the Derwent river by 18:00 - if not, there is a fair chance you’ll run out of breeze and you’ll sit there for the whole night and watch the rest of the fleet come up behind you and your handicap go out of the door!” 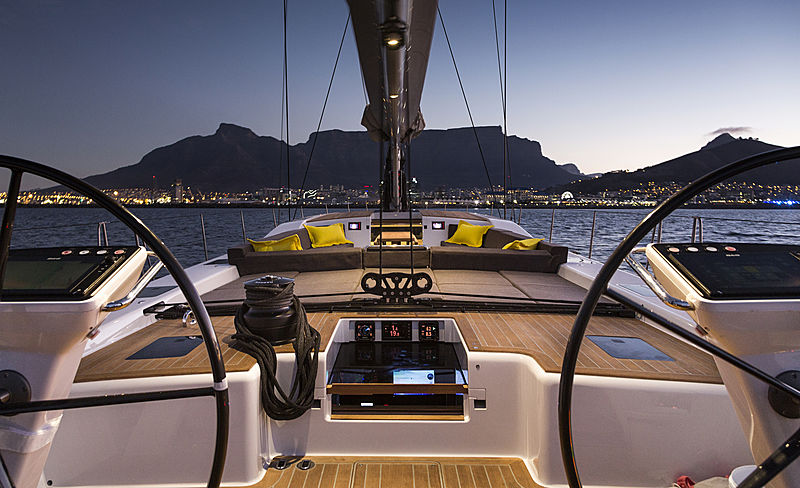 Turning his attention to superyacht regattas, Marcus brought Ammonite from South Africa for her debut at the Loro Piana Superyacht Regatta in June 2016. “I only want to do regattas now. I am not bothered about ocean racing now because I steer my own boat, and in long ocean races you can’t do that for more than two hours otherwise you’re not being fair to the rest of the crew. We do regattas regularly with my MC38 or TP52, and in one weekend we might be in seven races, which is more than the average club member does in half a season. You learn more about the rules, sailing, sail trim and all those sorts of things that way,” he explains. After placing in all her races during her debut regatta, Ammonite also competed in the Atlantic Rally for Cruisers (ARC) and the Maxi Rolex Cup.

It was a successful first season in both sport and leisure as Marcus and Caroline continued through the Panama Canal to Tahiti and Samoa, where Marcus is an honorary chief of a village. “Then we visited Tonga to go swimming with the whales, which I think is the most wonderful experience I have ever had in yachting or any marine environment.” Next on the list was Fiji, which soon became a repeat destination for the couple. “The Pacific is a unique and rewarding place. The people are quite wonderful. They don’t have much money and it occurred to me that I have spent a large part of my life trying to create wealth with a belief - which is sometimes challenging - that if I bought a bigger boat, house or car it would make me happier. So I was on that wealth treadmill of life if you like, and then when I came to Fiji I saw people who have very few material possessions but are so happy! Their values and culture are extremely strong, far stronger than anything in the Western world.” 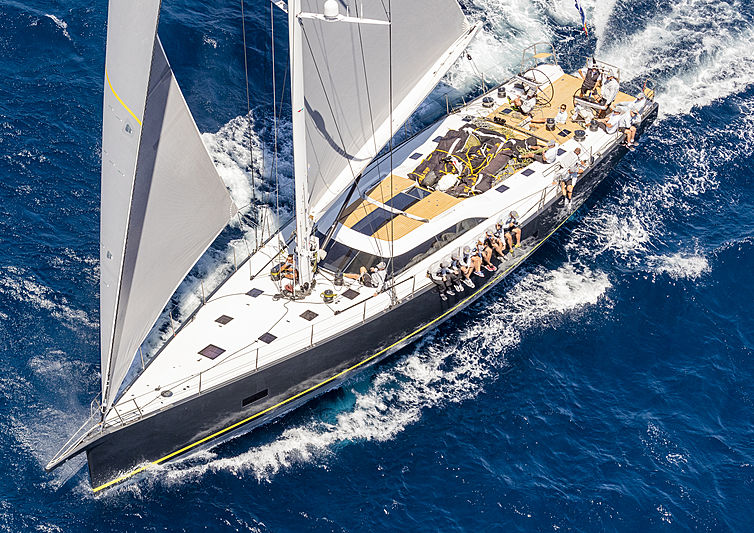 Photo: Carlo Borlenghi“We have built an evacuation centre and a pre-school in the Lau Islands. Also a toilet block, which cost the same as if I had taken a dozen people out for dinner in a really good restaurant in Sydney. The people of Lau are very appreciative of what you can do for them,” Marcus explains. As they continued to travel on board Ammonite, which was named after the extinct marine mollusc, the couple collected more anecdotes that depict how special superyacht ownership can be, especially as Marcus recalls visiting a particular restaurant in Italy: “In Capri, there is a family-run restaurant under the lemon trees called Da Paolino. Now, I love a caprese salad, so I am sitting there and out comes this big tomato and, knowing how big tomatoes are farmed in Australia, I thought this can’t be good… it was the best tomato I have ever tasted! So we are planning to go back there as soon as possible before we go to the Ionian Islands.”

With more plans to dip in and out of the Mediterranean to the few places that they have not yet discovered, and back to those they admire, Ammonite will come out of the water at the end of the year for what Marcus describes as “a haircut and shave,” more specifically, a paint job and other minor maintenance work. In the meantime, Marcus has a new toy to play with as he recently purchased the third unit in Southern Wind’s SW96 line. The new 31.46-metre superyacht, also to be named Ammonite, is currently under construction and scheduled to set sail following her delivery during the spring of 2020. “I will always do another boat! I am always ‘kicking tyres’ and attending boat shows - that’s just my fun!” he explains. The all-new Ammonite will join Marcus’ small fleet of yachts, including an in-build Palm Beach GT60, both of which are to remain at his home in Sydney. 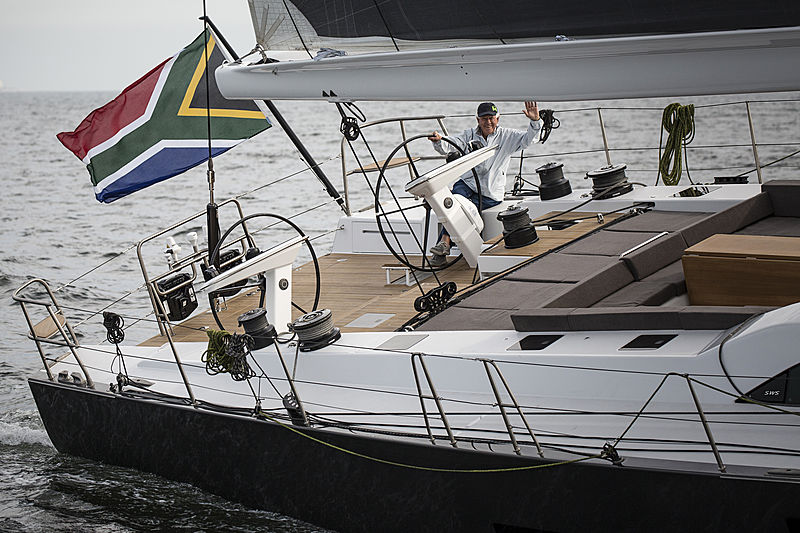 Photo: Carlo BaronciniMarcus Blackmore and his journey as a superyacht owner goes beyond his time as a successful competitor. His stories and encounters recognise the importance of ownership and the impact it can have on others - whether that be helping those who are less fortunate, investing in up-and-coming racing teams, or, learning how to be a better loser during a game of scrabble. “I work and I play, and I think it is important to have a mixture of both,” he says.

Marcus and Caroline are proud to sponsor Mat Belcher and Will Ryan the current 470 World Champions under the direction of Australia’s head coach Victor Kovalenko. “For me, it’s just giving a bit back to the sport that has given me so much enjoyment in my life,” Marcus commented.

Travel to Fiji: A gem in the precious Pacific