Mari-Cha III, the renowned and record-breaking Super Maxi sailing yacht is ensconced indoors at Derecktor, Connecticut facility as she undergoes a five month makeover. She arrived at the yard on somewhat short notice according to Derecktor spokesperson Kathy Kennedy. “The Mari-Cha people wanted to take advantage of the current favorable exchange rate in the U.S.. We’re pleased that they recognized Derecktor as the best choice for the job”. 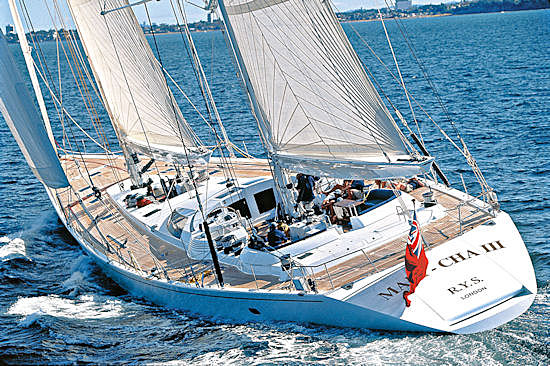 The 145 ft. ketch has a wide-ranging work list to be undertaken while at Derecktor. Jobs include new fresh and black water tanks, air-conditioning systems and ventilation, new rigging and hydraulics as well as a new generator and electronics. A full repaint of topsides, deck and bottom will be done along with an interior refinishing to a more minimalist style. The work is expected to take five months.

Captain Damien Durchon, who has been with the Mari-Cha program since 2003 and has been a part of numerous world sailing records including the fastest transatlantic ever on Mari-Cha IV, explained the reasons for choosing Derecktor “ We are quite demanding when it comes to our boats. We expect the work to be perfect. Crossing the Atlantic was well worth the effort to take advantage of the quality workmanship at Derecktor.” 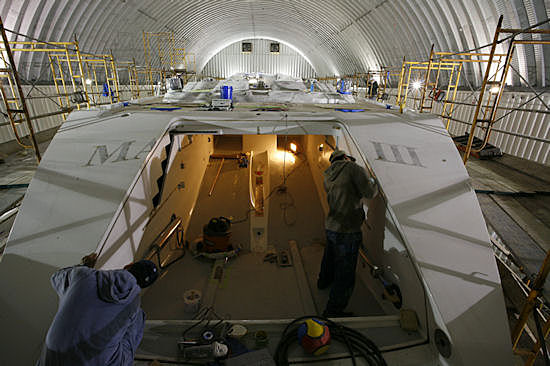 Launched in 1997, Mari-cha III was designed by Philippe Briand with a traditional interior by John Munford that can be removed to save weight when racing. In 1998 she broke one of the most enduring and prized records in sailing when she went transatlantic from New York to the Lizard in 8 days, 23 hrs, 59 minutes and 41 seconds, shattering the existing record.