Earlier this year, we reported on the launch of the hull of an extraordinary yacht in Croatia. Her designer, Marijana Radovic, has now revealed more details to SuperYachtTimes.com, about this unique project. JoyMe is a 50-metre tri-deck displacement yacht which is quite special in her exterior styling and interior design developed by Standby studio under the leadership of architect-yacht designer Marijana Radovic. 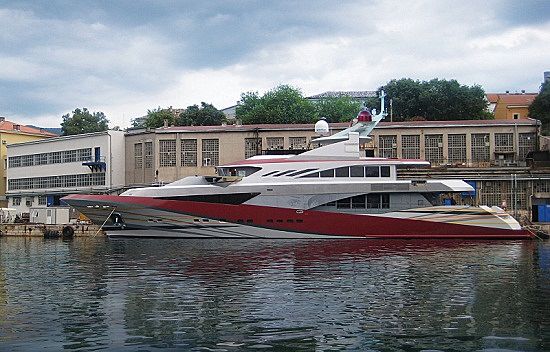 The main motivation behind the design effort was to produce something different and very personal for a client who could not find a true reflection of his taste in anything that the superyacht market had to offer up until now.

This challenge was addressed by creating an interior universe with many different dimensions. What is surprising is the fact that each compartment of space has been treated as a separate entity with its own story and philosophy and each one of these areas benefits from its own atmosphere, thereby communicating different emotions and feelings to its occupants. Rather than creating an interior with one uniform atmosphere, the client wanted a space with enough flexibility to suit his every mood. 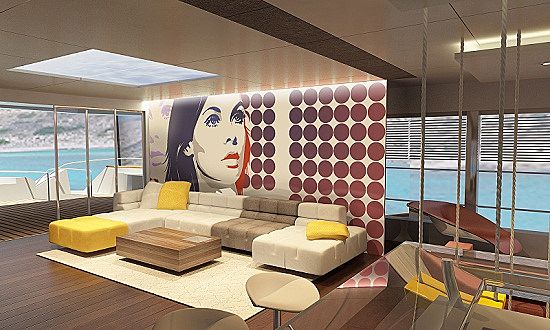 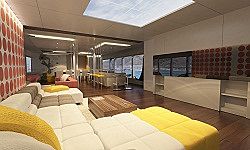 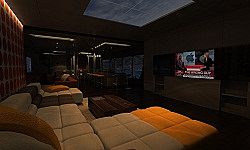 However, all individual spaces within the yacht's interior are connected by a common thread which is the objective to create a young and dynamic, yet comfortable and functional interior with an emphasis on good communication between different areas so as to make it supremely user-friendly. Another design characteristic of the interior is the emphasis on the notion of open space where different areas for different moods were created within the same space by avoiding compartmentalization. The premise is that a space can stand on its own as a tangibly different entity without necessarily being physically separated from others, as demonstrated by the layout and design of the main saloon. It is also worth noting the importance which was given to light as the presence of natural light was maximised while carefully studied and concealed lighting system takes over during night to maintain the elegance of this modern yet warm interior. 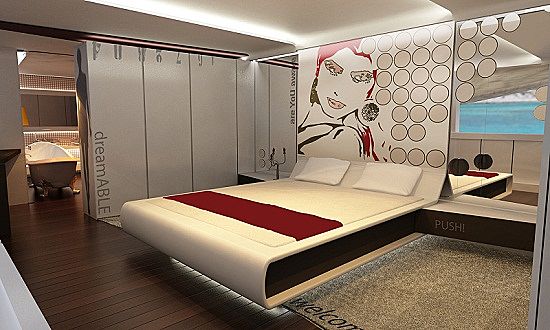 The intervention on the yacht's exterior styling by means of a very special paint scheme intends to emphasize the elegance of lines by visually lowering the profile and by bringing it closer to water. By accenting the exterior design with flowing lines, perforated textures and prints in order to emphasize the length rather than the height, the proportions are becoming more balanced and harmonious. At the same time, the appearance of the yacht immediately creates a more dynamic visual impression which many modern yachts lose in an effort to maximize inner volume. As such, even when berthed this yacht will be an invitation to move and to travel, as a reflection of a dynamic lifestyle. 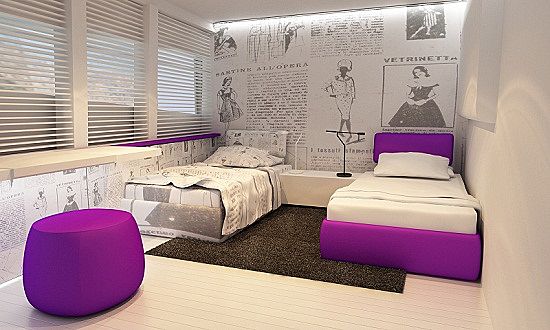 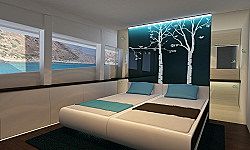 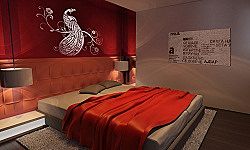 The essence of this design philosophy is also contained in the yacht's name: JoyMe. In her client's view, most yachts are an invitation to relax, rest and do nothing which is not what he was looking for. He does not want to run away from it all or isolate himself in some sort of a cocoon. This is why this design is on the contrary an invitation to get up and move, travel and be active and interactive in good spirit and joyous atmosphere. Her intention is to create joy if you join her on her adventures. As such, her philosophy is quite different from a great majority of "mainstream" yachts.

Charter deal of the week: the 50m superyacht JoyMe this summer

Superyacht of the Week: The unique and highly individual JoyMe