Marina Port Vell, Barcelona, which is set to become one of the world’s most elite superyacht destinations and the pre-eminent home port in the Mediterranean through a radical transformation, held its premiere Press Conference and Luncheon on 22 September 2011 during the Monaco Yacht Show. Attended by more than 75 media and business leaders, Martin Bellamy, Chairman of Salamanca Group, announced that “the transformation is underway” and highlighted the creation of a nautical cluster at Marina Port Vell with neighbours, MB92 and Pinmar. 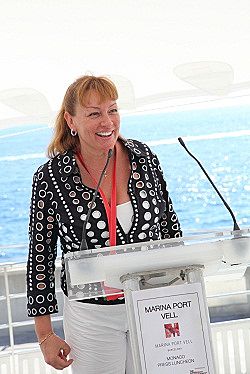 A lively Q&A session followed the presentation. When questioned on perceived competition from other marina projects such as Port Adriano and Porto Montenegro, Martin Bellamy commented that Salamanca Group see these marinas as being complementary and their development has helped to raise quality standards overall.

After the Q&A session, guests remained for an hour or more for luncheon and the opportunity to discuss the project with team leaders one-on-one.