Marine Group Boat Works, LLC, (“Marine Group”) a family-owned commercial boatbuilding and yacht repair yard with two haul-out facilities in San Diego and a sister marina, Fifth Avenue Landing in downtown San Diego, is seeing record numbers of superyacht contracts at their facilities in 2013. Marine Group and Fifth Avenue Landing were the choices of more than a dozen of this year's Americas Cup spectator superyachts for refits and dockage, while several of the vessels underwent extensive structural modifications. 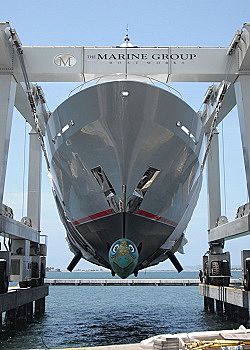 The number and scope of superyacht contracts have increased significantly in the past twelve months. “Marine Group’s superyacht division is showing a revenue stream valuing over $20 million, more than double the value last year,” says Todd Roberts, vice president of Marine Group Boat Works and Fifth Avenue Landing.  “The average yard period in 2012 was 45 days—average yard period this year is 90. There is much more builder involvement compared to years past. Marine Group hosted builders from Alloy Yachts, Pendennis Shipyard, Baltic Yachts and Delta where we had the pleasure of assisting with warranty repairs on several newbuilds.”

Marine Group’s infrastructure, which includes a 665-ton travelift and two yards in San Diego totaling over 1.2 million square feet of land and water, has allowed the company to quadruple its paint jobs and triple its superyacht haul-outs since 2012. Included in this capacity is the recent acquisition of a new refit facility formerly leased by Knight & Carver, one mile away from Marine Group's headquarters. The new location has been the site of several refits including those of megayachts over 65 meters (+200 feet).

Marine Group’s physical expansion, flexibility in scheduling, along with the year-round fair weather and the network of expertise and services around San Diego, will contribute to the growth of contracts for superyacht refits for the foreseeable future.

“We’d like to credit it to years of consistently having yacht owners and reps seeing our capabilities for themselves, believing in Marine Group’s ability to perform complicated and technical work lists; and then approving of the high quality work that we’re able to produce,” added Roberts.