The masts for the 52m ketch Nazenin V being built at RMK Marine in Turkey have been delivered. The all carbon spar package has been produced by Southern Spars. Nazenin V’s spar package is made from prepreg standard modulus carbon fibre. The Main mast is a five spreader rig that stands at 59.69m tall. 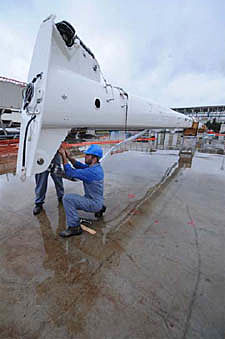 The Mizzen mast has three sets of spreaders and has an LOA of 40.88m. The spar package includes two Leisurefurl booms and a Crows Nest. The masts are currently being dressed and completed ready in good time for launching early in 2009.

The rest of the build has progressed well, and hull painting will be taking place this month. The lower deck cabins, styled by Redman, Whitely, Dixon, have been completed and specialised joinery pieces such as uniquely commissioned tables have been arriving onsite.

The teak decks are also looking exceptional and have been made up in the joinery facility alongside the boat. This practice meant that the teak boards for the complete sky deck were fitted in just two days.

RMK Marine currently has a busy order book with the new Dubois designed Oysters commencing build as well as several other projects including some major refit work.