Day 2 of the Maxi Yacht Rolex Cup opened with less than promising conditions. The Race Committee kept the fleet ashore until 1130, but even then it was not until 1330 that the racing began in just over 5 knots of easterly breeze. Three hours later, the Cruising and Mini Maxis had completed a 17 nautical mile course that took them to a windward mark, before reaching back west towards Capo Ferro where they entered the channel and reached off to the submerged outcrop of rocks known locally simply as Secca. From there, in a freshening breeze, they followed a fetch north to Monaci and another fetch back to Golfo Pevero, before finishing off Porto Cervo. Ranger (CAY IS) took a second bullet in Cruising, as did Numbers (USA) featuring the Alinghi crew in the Mini Maxis. 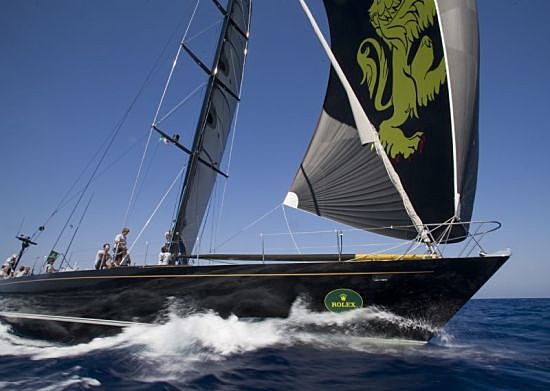 The Racing and Wally Divisions stretched their longer, more nimble legs a little further covering 25nm which included a long beat from Monaci down towards Mortoriotto before returning to Pevero and the finish. As they turned the corner at I. di Nibani the returning Wallys found themselves on a beam reach and at times appeared overpressed under their massive mains and spinnakers. With the foot of kites toying perilously close to the foaming bow waves, crew nerves must have been tingling. What looked a short hop must have felt like an age. Open Season was one to almost round up as she took a gust broadside, but this did nothing to upset her otherwise perfect day. Thomas Bscher's Open Season (GER), in the Wally Division, was joined by George David's Rambler (USA) in Racing on today's winner's podium.

Jochen Schuemann is tactician on Open Season: “The day started with a postponement but the race committee did a very good job. They waited exactly to the moment the breeze developed and we were able to sail downwind into the islands, which look great with all these maxi yachts sailing through the rocks.” 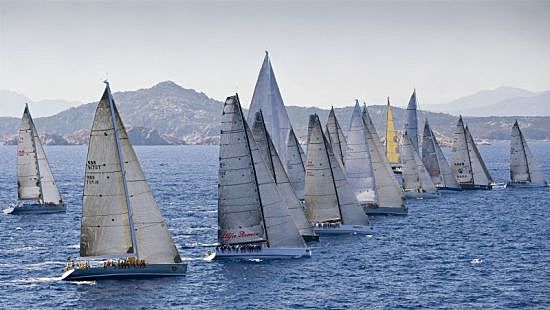 Schuemann, another triple gold medallist from the Games competing here this week, continued, “we have to fight in our division with two similar-sized boats. Today we had a good start and all three were very close together. Luckily we were in a very good position to keep Magic Carpet behind us and not to lose distance on Y3K in front. Real concentration was important during the entire race, but especially close to the coast where the wind was stronger than further offshore. Tactical decisions were very important because although you can't influence the smaller boats behind you have to beat them. It is what we were able to accomplish today and of course we are very happy about. It has been the first win for Open Season since quite a long time ago. The crew did a great job today!”

Whilst Y3K led the 143-foot Esense home on the water, it was Open Season that took the race ahead of Jean Charles Decaux's J One on handicap and now leads the Wally Division after two races. 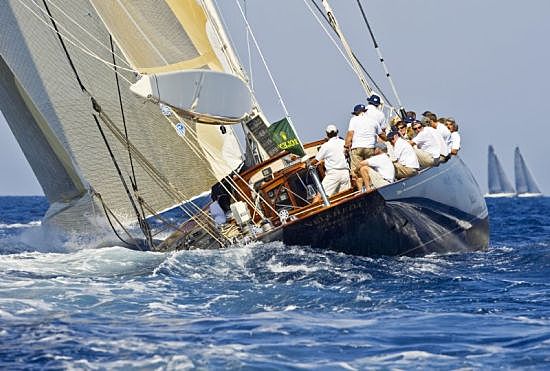 Back to Aboukir Bay, or at least the reach past Capo Ferro and into Bomb Alley. This was great sailing for the front-runners in the Mini Maxi Division. Almost a straight-line drag race, but for an annoying gybe near the end. Neville Crichton's Alfa Romeo 3 (NZL) with Torben Grael in the hot seat led by some distance a pack comprising Alegre (GBR), Numbers, Roger Sturgeon's Rosebud (USA), Jim Swartz's Moneypenny (USA) and one or two of the smaller Wallys, such as J One down towards the unsuspecting picnickers. The wind had finally built to double figures at this point and the spectacle was complete, as the group gybed together, as though signalled to do so by the lead boat.

Andy Soriano, owner of Alegre, who lives in the Philippines and is usually seen racing on the Asian Circuit was pleased with the way the day went and with progress generally, “it's a tough fleet. Every day we do a little better which is good. There was a little bit of everything today windwise, and we sailed a good race, which is important. I'm really enjoying being out there racing with a number of similar boats.”

Alegre went onto to finish the race in third place on the water behind Alfa 3 and Numbers, but came in second on handicap and now lies second overall behind the word-perfect Numbers. 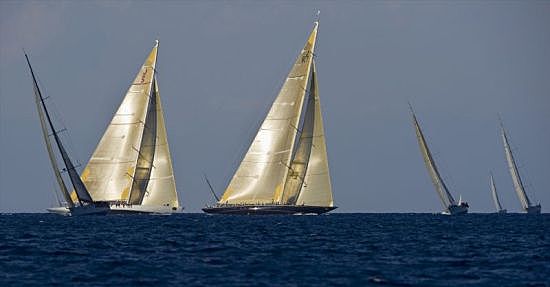 Peter Holmberg, an Olympic silver medallist, is tactician on All Smoke (GBR). Gunther Herz's 24-metre yacht, a former event winner under IMS, is struggling to keep up with the newly launched pack of IRC Mini Maxis, but finished a respectable eighth on handicap today to add to her sixth of yesterday. Holmberg paid credit to the Race Committee for getting the race underway, “I thought Peter Craig was being a bit ambitious, but he got us off at the right time. It was light at the start and these big boats can be pretty tricky in that, so it was a challenge. The breeze filled in downwind, so it was a good test of crew work and an enjoyable day.” Holmberg is also enjoying the range of courses on offer, “Today was tricky because the wind kept switching and you did not know how far it was going to change. Every boat has a navigator, the water's clear and when you have scenery like this I'd much rather race around the rocks than the buoys”. 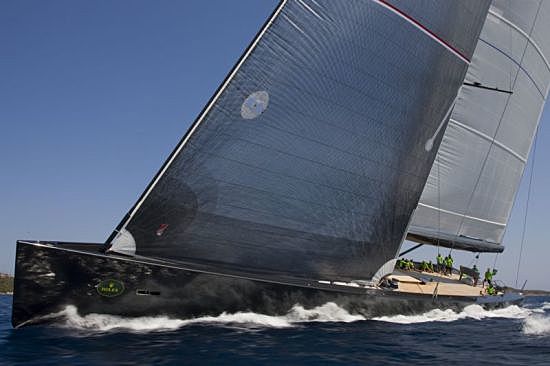 In the Cruising Division the two J Class yachts Ranger and Velsheda enjoyed another match-race round the course, seemingly oblivious to all that is going on around them. Ghost was first home again after a poor first leg that saw her trail the Js around the initial windward mark. Some good work on the ensuing long, downwind leg saw her open up on her more traditional looking rivals. The gap was never going to be enough, because though Ranger and Velsheda seemed only interested in each other they are sailing so well to post a 1,2 today some 13 minutes ahead of Edwin Van Der Straten's Bristolian on handicap. Ghost repeated yesterday's eighth, whilst things went very badly wrong for the mighty Salperton. 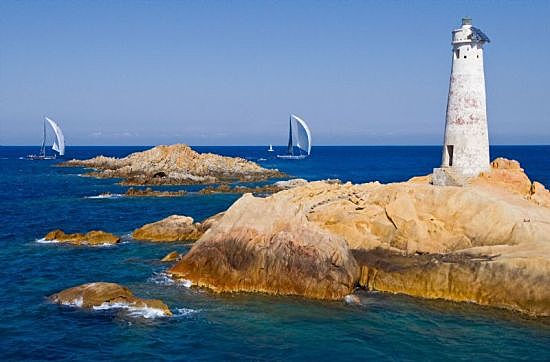 After yesterday's wide grins, Salperton was forced to retire from today's racing with hydraulic problems that will see her crew hard at work tonight to ready her for a return to the fray for the remainder of the series. After yesterday's excellent result everyone has their fingers-crossed the biggest boat in the fleet will be on the start line tomorrow.

In the Racing Division, the 90-foot, conventional keeled, water ballasted Rambler struck a blow for the little guy by pulling out a win today. Despite finishing some thirteen minutes behind the 100-foot, supremely powerful Alfa Romeo, George David's crew, with Ray Davies and Peter Isler sharing the tactician's role, scraped home on handicap by a mere 18 seconds. But that is the name of the handicap game. One second, one minute, one hour - a winning margin is a winning margin. 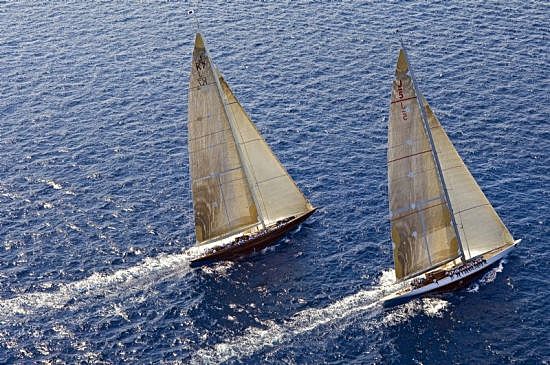 Principal Race Officer Peter Craig is hoping for better breeze and earlier start tomorrow. Whilst the Mini Maxis are expected to undertake Windward/Leewards, the remaining three divisions will continue to contest more of the fascinating coastal racing on offer off Porto Cervo.