If they ever invent a 4x4 RIB the photographers and film crews that covered today's proceedings at the Maxi Yacht Rolex Cup will be in the market for it. A one-hour postponement saw the wind build from zip to 20 knots and more. With the wind came the sea - short, sharp and steep. Great in a Maxi, dreadful in a small motorboat. But the spectacle was spectacular. And, whilst it was not all plain sailing, today was one of those days off Porto Cervo that sailors live for. Come results time, honours were even in the Mini Maxis with Numbers and Rosebud/Team both posting a first and second in their two races. J One collected a first bullet of the week in the Wally Division; the J-Class Ranger maintained her perfect record in Cruising and Racing went to the super-maxi Alfa Romeo. 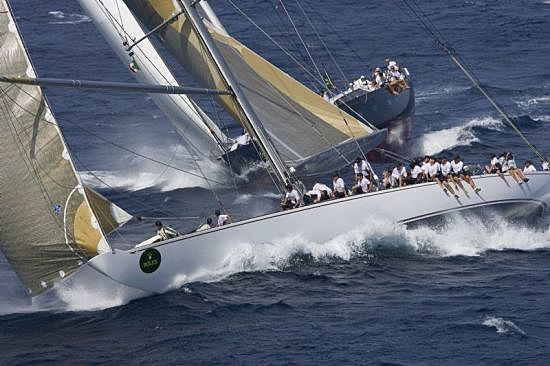 Principal Race Officer Peter Craig and the race committee kept crews in the harbour for an extra hour, which would have done little to help anyone prepare for the afternoon ahead, because though the wind was expected to build no one had quite predicted what occurred. Today was the allotted day for the Mini Maxis to sail two windward/leeward races - one of 8.8nm and one of 10.8nm. What a day for it. Meanwhile, Cruising, Racing and Wally Divisions took on a 24 nm coastal race that included a short leg to windward, a run downwind to the rocks at Monaci, a fetch down to Secca Tre Monti, before a long old beat to Mortoriotto and a run back to the finish off Porto Cervo, with a small hitch into Golfo Pevero, which kept everyone on their toes.

Neville Crichton's 30-metre lightening bolt, Alfa Romeo (NZL), blitzed the 24 miles in a shade over two hours. By all accounts the downwind legs were sights to behold as she lit up and took off to Monaci following the initial beat and then subsequently to the finish following the beat to Mortoriotto. George David's Rambler (USA) clung on to her coat tails, but could do nothing against the raw power that Crichton has at his fingertips finishing 14 minutes behind on elapsed time and 4 minutes down on handicap. Still tomorrow is another day and as the crew on Rambler showed yesterday she is capable of making her time. 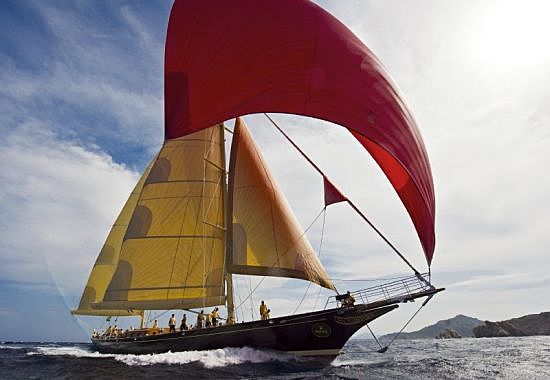 In the Wally Division, the day belonged to Jean-Charles Decaux's J One (FRA). She may be one of the smallest in the form, but J One has shown previously she is not prepared to be bullied by her bigger classmates. Decaux has an excellent afterguard comprising former around the world skipper Matt Humphries, Jens Christiansen and navigator Mike Broughton. But Decaux has to keep his hands on the wheel under class rules if he is not to incur a penalty. Was a day like today difficult? "It was a tough day. As usual here, we some very different wind speeds and a bit of swell so it was quite an interesting race," he responds. Do you enjoy being on the helm in these conditions? "Yes for sure, that is really a pleasure for me. I enjoy winning even more, but I enjoy being on the helm. It's hard, but when you like what you do you put in all the focus and concentration that you need." 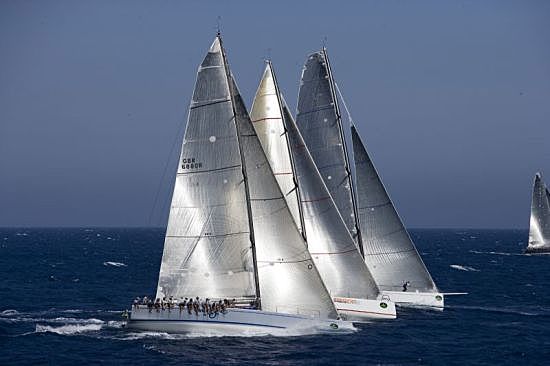 The Mini Maxi Division took their medicine. It was a nasty day for windward/ leewards, especially after the two previous, relatively gentle days. In race one today, the first beat saw the top five boats in the division pull away quickly from the rest of the fleet and then make short work of the downwind leg. "It was 4 and 4" according to Malcolm Park, trimmer and project manager for Rosebud/Team DYT, explaining to the bewildered that he was not referring to an off-road vehicle, but the minutes spent on each gybe.

Roger Sturgeon, owner of the STP 65, and winner of the 2007 Rolex Sydney Hobart made it sound like child's play. "It was just like sailing in Santa Cruz, California, except when the waves hit you they're warm instead of cold," he laughs. "The seas were not as flat as the other days this week, so that made it a little bouncier. But everything was fast with a lot of tight racing. At the first weather mark we had one guy above us and one below, and we're trying to survive in between." Survive they did. Rosebud went on to pass the Ernesto Bertarelli-chartered Numbers (USA) on the downwind leg and maintain her lead to the finish, where three boats crossed the line within a space of 15 seconds. Rosebud took the win on handicap too. 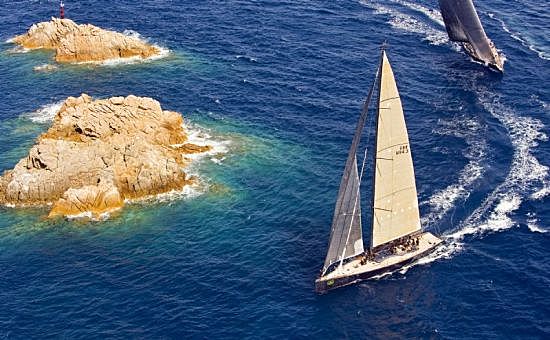 It was not quite so good in the second of the day's races, where Numbers got away from Rosebud on the first run, to finish first on the water and handicap. Despite Torben Grael and his ocean-racing crew on Alfa Romeo 3 (NZL) sneaking into second on elapsed time Rosebud/Team DYT did enough to place second on corrected time. Sturgeon is really enjoying the week, "it's fabulous here. The racing's great, I love all the obstacles.the rocks. We cut a corner the other day and made a 100 yards, it's a lot of fun!" Before anyone points out that cutting corners is a little foolhardy in these waters, Sturgeon goes on to explain that he and his crew did a lot of diving before racing began to check just what does lie beneath the waves. Time well spent, as a number of boats from previous events will attest. 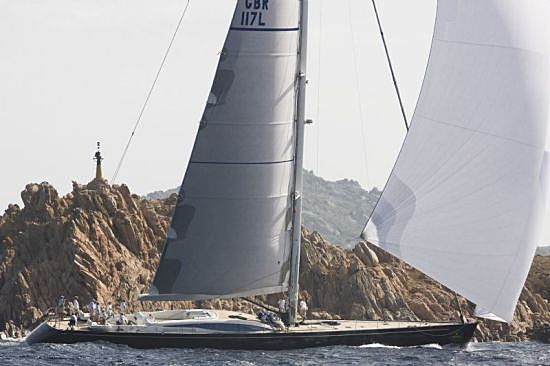 In the Cruising Division the two J Class yachts renewed their private battle with a little too much vigour. A collision on the start saw Velsheda take a penalty turn, which meant their race was virtually over before it began. Worse was to befall this proud J, a standard bearer for yachts of a by-gone era, as she approached the turn at Mortoriotto and a series of mishaps led to her eventual retirement. Ranger, meanwhile, did not allow her dented bow to dent her performance. With more water over her deck than some of the submerged rocks Ranger kept up their picture perfect performance to come home third on the water, and win by some 15-minutes on handicap from Charles Dunstones' Hamilton II.

Another of the spirit of tradition yachts here this week, Hetairos, added a fourth place to her scoreline to keep her in second overall in the standings. Jens Cornelson, the project manager for the boat described the day, "we had a good day, we saw about 22 kts, but the boat loves it. Some things were overpowered a little, we had some technical problems: a little breakage from the hydraulic roller furler for the genoa. So we changed down to the inner forestaysail, and hopefully we'll have it fixed for tomorrow." 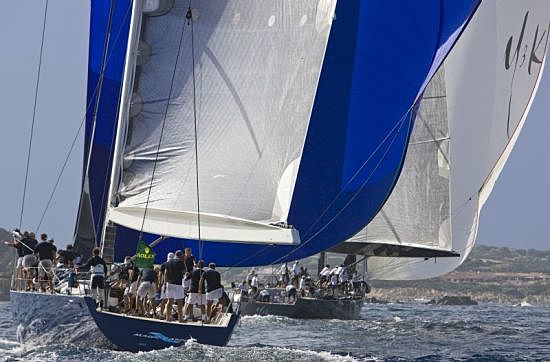 Hetairos is one of those boats that never sits still, despite her elegant appearance. She spent the winter off East Africa, enjoying a busy cruising season. She races with a mix of amateurs and professionals, and with little opportunity to practice, her adeptness at the start and during other race manoeuvres is surprising, but down to the quality of the people on board according to Cornelson.

The Race Committee expects good winds again tomorrow, when racing is not scheduled to start before 1400 in order to accommodate the International Maxi Association annual general meeting in the morning. All four divisions will undertake a coastal race and in the evening owners and invited guests will enjoy the Rolex Gala Dinner at the Cala di Volpe.