MCC moves forward toward the future, and at the same time, turns back in time. At this week’s 2011 Palm Beach Boat Show, March 24-27th, MCC is introducing their new design for a 46-meter Long Range Motor Yacht—the Neo Classic Series.

In painting, sculpture, architecture literature, and music, Neo Classicism has been defined as a desire to return to the pure ideals of some other time in history, whether it is ancient Greece, the Renaissance, or the 20th century. With its new 46-meter, MCC combines historic design with state-of- the-art modernity. 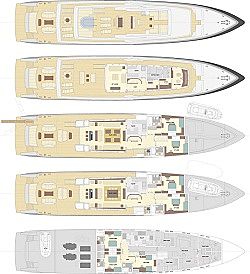 MCC naval architect Kasia Milewska says: “I took my inspiration from the ships that were built early in the last century, no nonsense efficiency, the shape of the bow…” Like all Neo Classics, the best new design is not derivative, but deferential to the past with a vision toward the future.

The sleek new MCC 46-meter can be offered with either a twin engine/ twin prop configuration or the most fuel efficient version with a single prop similar to the Marco Polo series.

With a maximum speed of 16 knots, the yacht is designed for long-range speeds at 14 knots. The hull is decidedly rugged but at the same time it is a proper yacht, handsome and stately.

One could argue if the plumb bow is modern or retro, but the overall exterior styling of the new 46 is definitely is lean and clean.

The main salon and bar are on the main deck with infinite flexibility in terms of dining/lounge area. The sky lounge is on the bridge deck along with the captain’s cabin and wheelhouse. Accommodations are for ten, with luxurious master and VIP suites on the main deck and three double guest staterooms on the lower deck along with crew area and galley. Jacuzzi, sun pads and bar can be found on the sundeck. There is tender stowage in a garage on the foredeck accessed by a port side shell door and a second tender can be stored in a lazarette with a shell door that can convert into a swim platform. The transom door is operated hydraulically. Expansive decks and overhangs from each deck level give a great deal of outside living space.