British Designer Alex McDiarmid, based in the South of France, has unveiled his latest design concept for an innovative 85 metre superyacht, Iwana. The project sees a fresh thinking approach to the styling of a 85m Super Yacht and as always, inspiration is diverse and of a non nautical philosophy. Lizards, in particular iguanas were studied for their form, characteristics including stance, and colouring. The word iguana is derived from a Spanish form of the original Taino name for the species Iwana. (The Taino People are an indigenous people of the Caribbean). 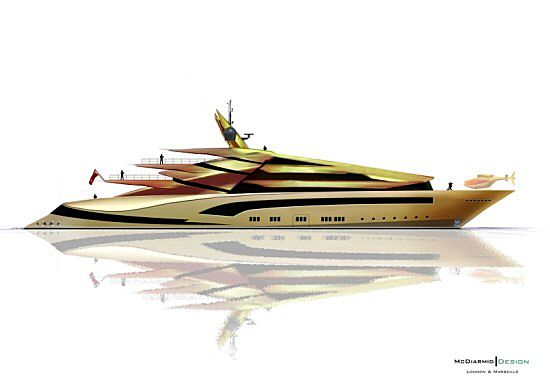 The designer says he was adamant about keeping a classic bow but wanted to really push some boundaries with the styling. The aft section of the hull, superstructure and 'Day Light Opening' / DLO window graphics are there to be explored in terms of style. Similar to panoramic roof windows on modern cars, the super structure integrates a full length panoramic roof window running over the yacht.The main superstructure takes its form from the head of an iguana while the decks and communication tower are inspired by the dorsal crests of these beautiful lizards. Something new, exciting and 'moving the game on'.

In order to maximise deck space aft, the bulwarks open into two fold-out platforms. Not just two small balconies, but two large bathing platforms. A helicopter, custom tenders and toys are under development matching the exterior styling of the yacht. Water toys include waverunners, sea scooters, windsurfers, kayaks, waterskis, wakeboards and a whole range of scuba and fishing gear.