Malcolm Mckeon Yacht Design and Mark Whiteley have joined heads once again to design the forthcoming 77.85-metre concept superyacht MM770. The two renowned designers have had a successful relationship spanning more than thirty years. This latest venture - developed in close association with Feadship - has provided both parties with plenty of room to fully utilise their creativity.

The MM770 has an exterior design that features cascading timber running down each of the five decks - fore and aft - to give her an astounding finish. The two designers have sought to emulate designs more often found on sailing yachts, with the intention of removing as much of the friction between the owner and natural elements as possible. 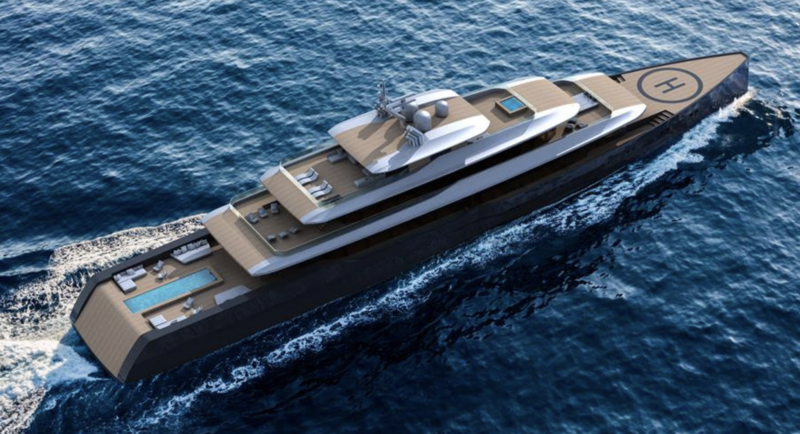 With an expansive communal space on the main deck, along with an exterior lounge area and an alfresco dining table for twelve, the MM770 has been designed with socialising in mind. She has four guest suites, all of which are fitted with floor to ceiling windows and private balconies. Meanwhile, the owner’s suite is situated on the upper deck, which is entirely self-contained. The forward-facing master stateroom is encased in a curved wall of glass and features his-and-hers ensuites, a study, and a personal pantry. If the owner of the MM770 wanted even more privacy, the sky lounge to aft can also be excluded from guest use.

Mckeon and Whiteley have fully capitalised on space, so the MM770 is brimming with features and toys. To name but a few, to aft is an impressive 8.8-metre glass-bottomed pool, whilst on the sun deck sits a Jacuzzi nestled in between an array of sun loungers and two interfacing bar counters. There is space to land a helicopter on the foredeck, and between the flush deck is stowage for tenders that can be deployed and recovered by crane. One of MM770’s most innovative features though is the aft portion, which folds down to enclose the beach club and secure the transom when the yacht is out to sea.

As privacy has also been at the heart of this design, the MM770 has been configured so that the fifteen crew can be entirely segregated from the guests.

Regarding specs and power outage, the MM770 will offer speeds of up to 17 knots. This is what the two designers have to say about their latest venture:

“When we design a sailing superyacht, establishing a continuous visual connection with the sea is always part of the design brief. Applying that objective to motor yacht design, we have been able to reinforce that principle in new and inspiring ways.” – Malcolm McKeon

“Creating a more architectural interior for this design with MMYD has been an enjoyable challenge. Careful consideration has gone into creating intimate spaces with their own identity and atmosphere. The aim for the interior and exterior living spaces is for the owner to feel she is a home from home on the sea, reflecting the owner’s style in a warm and modern way.’’ – Mark Whiteley