New Zealand shipyard, McMullen & Wing, has recently released new details of their new 50 metre expedition superyacht currently under construction. The vessel has been commissioned by a buyer eager to explore the world from the safety and comfort of his own boat. 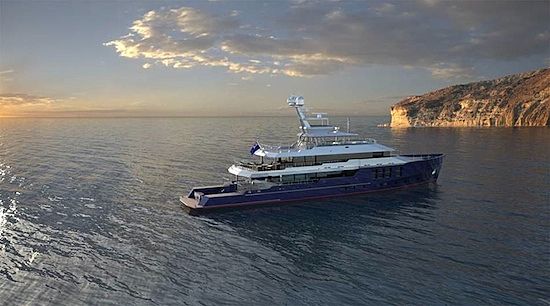 The project formerly known as Star Fish, was put on hold in 2012, after she was damaged in a fire, when she was two and a half years into her three year build. The project was sold to her current owners in 2014, who are now completing the project.

The yacht will accommodate up to 12 guests over five luxurious cabins, with interior decoration made up of natural materials to create a relaxed, modern ambiance. The owner’s suite is particularly impressive. Located on the bridge deck aft, the suite opens on to a private aft deck, providing exclusive privacy over spectacular views.

Throughout, light, airy spaces will flow onto extensive decks on all levels. Bulwark balconies allow the floor-to-ceiling glazed doors from the dining space to frame a vista, whilst also providing the ultimate sunbathing location suspended over the water. Further outside, the lowered aft cockpit is a protected area for fishing and lounging, closely connected to the expansive aft deck whilst directly in touch with the water’s surface. An extensive fleet of tenders and toys will also be provided.

The owner is reportedly very involved with the creation of the yacht. Scheduled for delivery in 2016, she will start her journey in Auckland before moving on to the South Pacific and the rest of the world.